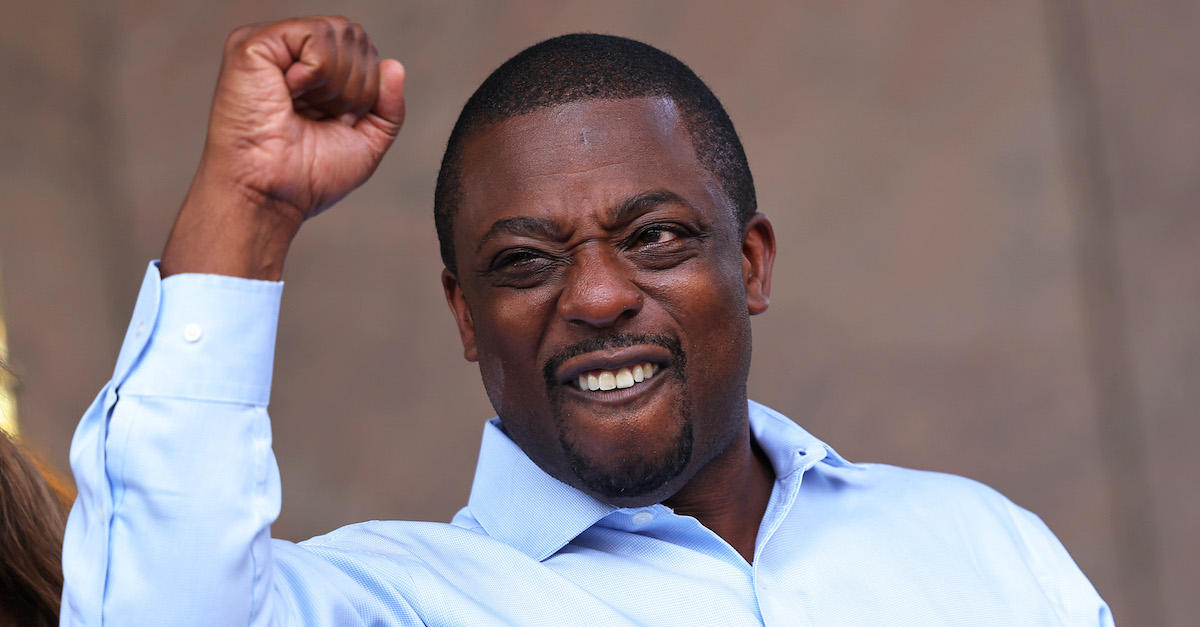 State Senator Brian Benjamin pumps his fist as he celebrates during a press conference announcing him as Lt. Governor on Aug. 26, 2021 in New York City.

New York’s Lt. Gov. Brian Benjamin (D), the second-in-command to Gov. Kathy Hochul (D), surrendered to federal authorities on Tuesday on a bribery conspiracy indictment accusing him of scheming to funnel money to a prior campaign.

Benjamin resigned after pleading not guilty on Tuesday.

The five-count indictment dates back to before Benjamin’s tenure as a New York state senator from 2019 until early 2021, before he became Hochul’s top lieutenant. Prosecutors say that he participated in a scheme to obtain campaign contributions from a real estate developer in return for using his senatorial position to help obtain a $50,000 for a non-profit organization controlled by that developer.

The allegedly illegal contributions were intended to benefit Benjamin’s failed campaign for comptroller in 2021, prosecutors say.

Hochul’s office did not immediately respond to an email requesting comment. She is not accused of any knowledge or wrongdoing in connection to charges.

Benjamin’s attorneys James Gatta and William Harrington released a joint statement defending their client, largely acknowledging the broad contours of the case and putting it in an innocent light.

“There has never been a federal case like this in America,” they wrote. “Brian supported a $50,000 grant to Friends of Public School Harlem. Every dollar was to buy supplies for public school students in Harlem. There was nothing inappropriate about this grant.”

Confirming their client’s resignation, they added that Benjamin “will focus his energies on explaining in court why his actions were laudable, not criminal.”

“He looks forward to when this case is finished so he can rededicate himself to public service,” they concluded.

Though the name of the alleged co-conspirator is shielded in court papers, the New York Times identified the developer as Gerald Migdol and the charity as Friends of Public School Harlem. Migdol was arrested late last year on Nov. 19, on a similar campaign finance scheme, and they appear on the same docket.

Benjamin engaged “in a series of lies and deceptions to cover up his scheme, including by falsifying campaign donor forms, misleading municipal regulators, and providing false information in vetting forms” while under consideration for lieutenant governor, according to his indictment.

On March 8, 2019, Benjamin allegedly informed Migdol of his plans to run for comptroller and asked him to bundle for him. When Migdol replied that his ability to bundle donations would be limited and draw from the same pool of donors for his non-profit, Benjamin replied: “Let me see what I can do,” according to the indictment.

Before that meeting, prosecutors say, Benjamin did not include Migdol’s non-profit on a list of organizations for which he requested state funds. Benjamin had, however, requested funding for another education-focused organization in Harlem that had requested funds from his office, according to the indictment.

Prosecutors say that Benjamin’s priorities quickly shifted after the meeting on March 8, 2019.

“Instead, on or about May 31, 2019, less than three months after telling [Migdol], in substance and in part, ‘Let me see what I can do,’ Brian Benjamin, the defendant, called [Migdol] and told [him] that Benjamin intended to procure a $50,000 grant for [Friends of Public School Harlem],” the indictment states.

The state senate approved a resolution approving a grant in that amount to Friends of Public Schools Harlem on June 19, 2019, and Benjamin allegedly informed Migdol the next day in text messages.

“Do you recognize the 3rd entity on the list?” Benjamin wrote, attaching a screenshot of the resolution, according to the indictment.

Approximately two weeks later, the campaign contributions started pouring into his office at a meeting on July 8, 2019.

A Facebook photo posted on Sept. 13, 2019 shows Benjamin holding a $50,000 check for Friends of Public Schools Harlem in a smiling photo with Migdol.

The U.S. Attorney’s office for the Southern District of New York held a press conference at noon.

Update—April 12 at 6:08 p.m.: This story has been updated to note that Benjamin pleaded not guilty to his charges and resigned.