Judge Denies Challenge of Vaccine Mandate for National Guard: COVID Has Killed More Americans Than ‘All of the Wars the United States Has Ever Fought’ 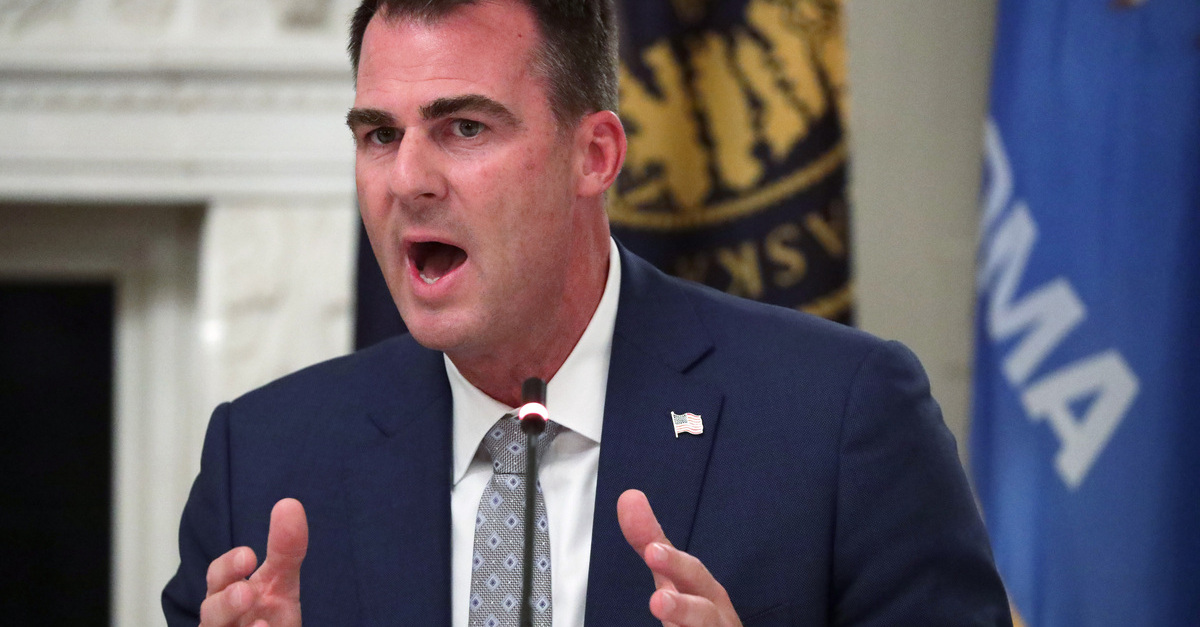 Governor Kevin Stitt (R-OK) speaks during a roundtable at the State Dining Room of the White House June 18, 2020 in Washington, DC. President Trump held a roundtable discussion with Governors and small business owners on the reopening of American’s small business.

A federal judge sided with the Biden administration in a lawsuit filed by Oklahoma Gov. Kevin Stitt (R) over the COVID-19 vaccine mandate for National Guard members.

Senior U.S. District Judge Stephen P. Friot, a George W. Bush appointee, appeared to have little patience for the arguments advanced by the Sooner State, as he denied Oklahoma’s motion for a preliminary injunction to block the mandate. Friot rejected the notion that mandated vaccines for COVID-19 are unduly burdensome, pointing out that it “is the one–in addition to the nine that already apply to all service members–intended to protect service members from the virus which has, in less than two years, killed more Americans than have been killed in action in all of the wars the United States has ever fought.”

Friot was clear to point out that his ruling is based on “federal law, not common sense,” but that “either way, the result would be the same.”

Friot ruled that Oklahoma has no standing to bring the lawsuit on behalf of its citizens, as the federal government is presumed to operate in the interests of all citizens. The court continued, holding that Oklahoma failed to show standing in its own right because “the State has not made a clear showing of how EO 14043 or the military vaccine mandate has caused, or will cause, economic injury to the State.” Rather, reasoned Friot, Oklahoma alleged that it would lose “State tax dollars” when federal employees lose their jobs because they choose not to be vaccinated. Such an injury, that fails to go “beyond sheer speculation,” is insufficient to confer standing, explained Friot.

Friot did accept Oklahoma’s argument that it has tangible injury in the form of having insufficient National Guard personnel at the ready.

“Even if the court were to enjoin defendants from en-forcing EO 14043,” the judge pointed out, “the Guard members remain subject to the separate military vaccination requirement,” the ruling continued.

Friot made clear that his ruling was not limited to procedural deficiencies. He wrote:

The COVID vaccination mandate should be understood against the backdrop of other military immunization mandates–which date back as far as General George Washington’s mandate that troops in the Continental Army be inoculated against smallpox.

Defense Secretary Lloyd J. Austin is “the highest civilian official having direct responsibility for the readiness of the Nation’s military forces,” and he deemed the vaccination mandate “an essential military readiness requirement for all components and units of the military, including the Oklahoma National Guard.” Friot found “no basis upon which this court might second guess that judgment.”

Furthermore, Friot noted, “From day one of the military vaccine mandate, the Guard was included.” Including the National Guard was essential as a part of maintaining “a healthy and ready force.” The vaccine mandate goes to the heart of federal supervision of the military, wrote Friot, writing, “This, in the midst of a global pandemic, goes to the heart of ‘the discipline prescribed by Congress,'” to regulate its military.

Judge Friot continued, dismissing Oklahoma’s multiple constitutional arguments, and holding that no public interest would be served by blocking the federal vaccine mandate. He reasoned:

[T]he court would be hard-put to find that the public interest would be served by entry of an order prohibiting the implementation of a vaccine mandate which adds one FDA-approved vaccine to the list of nine that all service members are already required to take–that tenth vaccine being the one which has been shown to be remarkably effective in mitigating the effects of the pandemic which has affected millions of Americans, including thousands of service members.

Other challenges of Biden administration vaccine mandates for employers are on the Supreme Court’s docket and scheduled for argument in the new year.