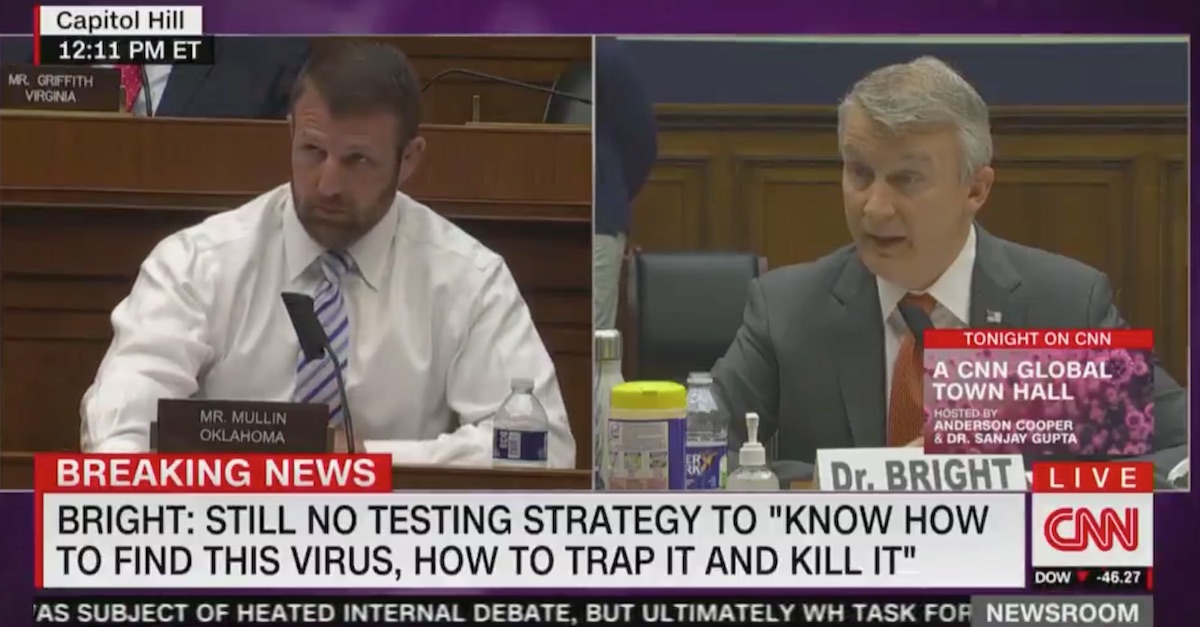 Rep. Markwayne Mullin (R-Okla.) spent his time asking Dr. Rick Bright a series of probing questions about sick leave and hypertension on Thursday rather than focusing on the substance of Bright’s whistleblower complaint.

Bright, the former head of the Biomedical Advanced Research and Development Authority (BARDA) at the Department of Health and Human Services (HHS), claimed in April that he was demoted for opposing the broad use of hydroxychloroquine, an anti-malaria drug touted by President Donald Trump amid the coronavirus crisis. Bright subsequently filed a whistleblower complaint with the Office of Special Counsel, claiming that HHS illegally retaliated against him. The OSC issued a preliminary finding siding with Bright.

On Thursday, Bright appeared on Capitol Hill for a hearing before the House Committee on Energy and Commerce’s health subcommittee. Bright reiterated that repeated dire warnings on COVID-19’s impact on America went unheeded.

“As I reflect on the past few months of this outbreak, it is painfully clear that we were not as prepared as we should have been. We missed early warning signals and we forgot important pages from our pandemic playbook,” the vaccine expert’s prepared statement said. “HHS leadership was dismissive about my dire predictions about what I assumed would be a broader outbreak and the pressing need to act, and were therefore unwilling to act with the urgency that the situation required.”

Here’s what Rep. Mullin focused on during his questioning of Bright.

Honestly has to be seen to be believed—Rep. Markwayne Mullin spent his entire time trying to discredit Bright because Bright … has hypertension that sometimes requires medical leave. pic.twitter.com/2GdUkjGB56

Mullin first wanted to know if Bright was using medical leave or vacation to appear before the subcommittee. Then he asked Bright to explain how he can have a high blood pressure issue that is keeping him out of work but not keeping him from testifying in the House.

“I had a conversation with my physician about my hypertension and we’ve been managing it over the last three weeks because this has been very stressful to be removed suddenly without explanation for my role and my position. It’s a life change for me. My physician has been working very closely with me to manage my hypertension and stress and the conversation I had with him last night indicated—” Bright said, before Mullin cut him off.

“I guess I’m kind of confused here because you say you have hypertension, but yet you were able to do these interviews, you’re able to make the report, you’re able to do this hearing. Yet you’re too sick to go into work but you’re well enough to come here while you’re still getting paid from the United States government? Is that correct?” Mullin asked.

“Sir, I’ve been under medical leave until—” Bright began responding.

“I get that, but if you’ve been underneath medical leave too sick to do that but yet you can prepare for a two-hour hearing … I just, I’m just having a hard time tracking that. I have a hard time understanding that,” Mullin said. “And if you have hypertension and you’re too sick to go to NIH but you didn’t ever experience that in BARDA, right? You never never had issues in BARDA—with hypertension?”

Bright said that he didn’t have the level of stress of being removed from his position while he was in BARDA.

“I get it. People handle pressure quite different. But as a director of BARDA I would feel like you’re in quite a bit of a stressful position trying to manage a pandemic,” Mullin answered. “You could manage that but can’t manage your own hypertension when it comes because you got removed from the office but yet you can still receive pay from NIH but you can’t show up for work. And then all of a sudden you can show up for this but you can’t do that.”

Mullin conceded that Bright was a “bright” individual, but said he wanted to make sure Bright was doing something to deceive the American people on the taxpayer’s dime.

Mullin’s line of questioning came in stark contrast to a Republican’s colleague’s.

Rep. Greg Walden (R-Ore.) said that there should not only be rigorous congressional oversight of pandemic stimulus spending, but also serious investigations of whistleblower allegations about the federal government’s response to the novel coronavirus crisis.

“Dr. Bright, your allegations are serious. They deserve a real investigation,” Walker said. “I know the Office of Special Counsel, with whom you filed your complaint, will do just that, and I know they take their work seriously and will hear you out. And importantly, we’ll give those named in your complaint an opportunity to have their side heard as well.”