In April, Dr. Rick Bright, the former head of the Biomedical Advanced Research and Development Authority (BARDA) at the Department of Health and Human Services (HHS), claimed he was demoted for opposing the broad use of hydroxychloroquine, an anti-malaria drug touted by President Donald Trump amid the coronavirus crisis. On Tuesday, Bright–with the help of Christine Blasey Ford’s lawyers–filed a whistleblower complaint with the Office of Special Counsel (OSC).

Law&Crime obtained a full copy of the vaccine expert’s complaint, which can be read below. Per the complaint, HHS committed “illegal retaliation” against Bright and the OSC “should request HHS to stay its transfer of Dr. Bright” to the National Institutes of Health (NIH) until the matter is fully investigated:

Because there are reasonable grounds to believe that a prohibited personnel practice occurred, the OSC should request that HHS stay the personnel action and reinstate Dr. Bright as BARDA Director. See 5 U.S.C. § 1214(b)(1)(A)(i). An initial stay “is designed to permit OSC to complete its investigation and may be granted on the basis of relatively little information.” Special Counsel v. U.S. Fish & Wildlife Serv., Dep’t of Interior, 62 M.S.P.R. 388, 392 (1994).

Typically, if HHS does not informally agree to a stay, the OSC could request that any member of the Merit Systems Protection Board (“MSPB”) order a stay while the OSC completes its investigation. A stay request “shall” be granted, “unless the [Board] member determines that, under the facts and circumstances involved, such a stay would not be appropriate.” 5 U.S.C. § 1214(b)(1)(A)(ii). The Board will view the record in the light most favorable to the Special Counsel and will grant the stay request so long as it falls within the “range of rationality.” Special Counsel ex rel. Cefalu v. Dep’t of Justice, 2012 WL 11893480, at *1 (M.S.P.B. Oct. 23, 2012).

Currently, however, there are no members of the MSPB. President Trump has nominated three people to fill the three open positions – Dennis Dean Kirk (nominated March 8, 2018), Julia Akins Clark (nominated June 20, 2018), and B. Chad Bungard (nominated April 25, 2019) – but to date, the Senate has taken no action to confirm them. This lack of a Board quorum, indeed the lack of any Board members, makes it impossible for such a stay to be ordered by anyone other than the HHS Secretary. HHS violated the WPA by removing Dr. Bright from his position because he made protected disclosures in the best interest of the American public. Dr. Bright should not now be denied the right to have his complaint investigated fully and fairly before he is formally transferred to NIH – a move that will harm not only him, but the country as well. Therefore, the OSC should request a stay, and the Secretary Azar should grant that stay.

The complaint alleged that Bright was retaliated against because he resisted the promotion of hydroxychloroquine as potential treatments for the novel coronavirus COVID-19. To hear the complaint tell it, Bright refused to “fall into line with” the Trump administration’s “directive”:

Dr. Bright’s reluctance to fund EIDD-2801, which had already receiving $30 million of government funding through NIH and DOD to conduct Phase 1 clinical trials, clearly frustrated Dr. Kadlec and further strained their relationship. Finally, as discussed in Section E below, Dr. Kadlec’s frustration with and animus towards Dr. Bright reached its breaking point when, after the emergence of COVID-19, Dr. Bright resisted efforts to fall into line with the Administration’s directive to promote the broad use of chloroquine and hydroxychloroquine and to award lucrative contracts for these and other drugs even though they lacked scientific merit and had not received prior scientific vetting. Dr. Bright’s refusal to do so, along with his communication with members of Congress, the White House, and the press about these issues, which revealed HHS leadership to be disengaged and dismissive of the emerging threat, proved to be Dr. Bright’s undoing.

The above amounts to an elaborated and official version of what Bright had alleged before.

“Specifically, and contrary to misguided directives, I limited the broad use of chloroquine and hydroxychloroquine, promoted by the Administration as a panacea, but which clearly lack scientific merit,” Bright said in a statement released to the media back in April. “While I am prepared to look at all options and to think ‘outside the box’ for effective treatments, I rightly resisted efforts to provide an unproven drug on demand to the American public. I insisted that these drugs be provided only to hospitalized patients with confirmed COVID-19 while under the supervision of a physician. These drugs have potentially serious risks associated with them, including increased mortality observed in some recent studies in patients with COVID-19.”

“I believe this transfer was in response to my insistence that the government invest the billions of dollars allocated by Congress to address the Covid-19 pandemic into safe and scientifically vetted solutions, and not in drugs, vaccines and other technologies that lack scientific merit,” Bright added. “I am speaking out because to combat this deadly virus, science–not politics or cronyism–has to lead the way.”

But the complaint also included numerous claims that the Trump administration repeatedly ignored “dire warnings” about the impact of the coronavirus.

In late January, “It became increasingly clear to Dr. Bright that HHS leadership was doing nothing prepare for the imminent mask shortage…” 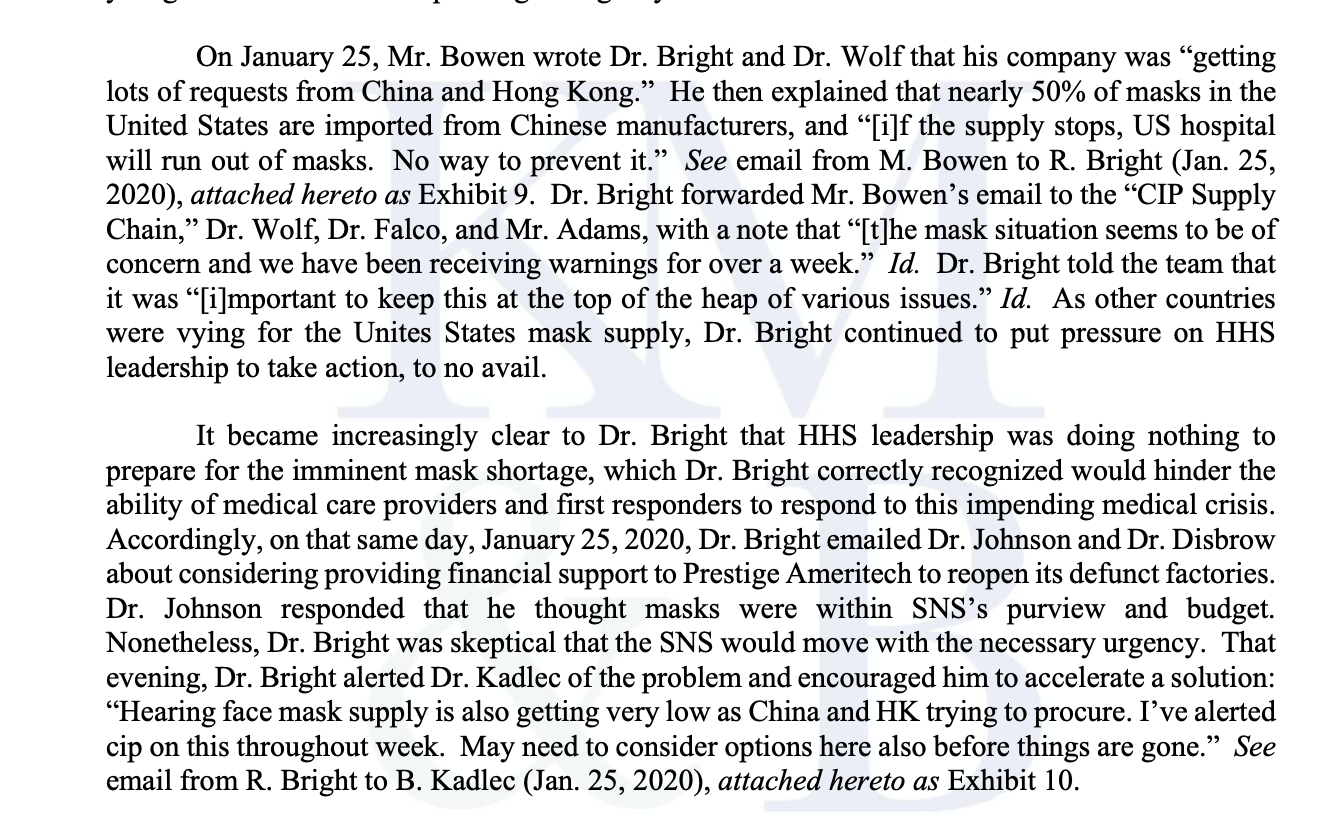 “A horrible situation will become unbearable” 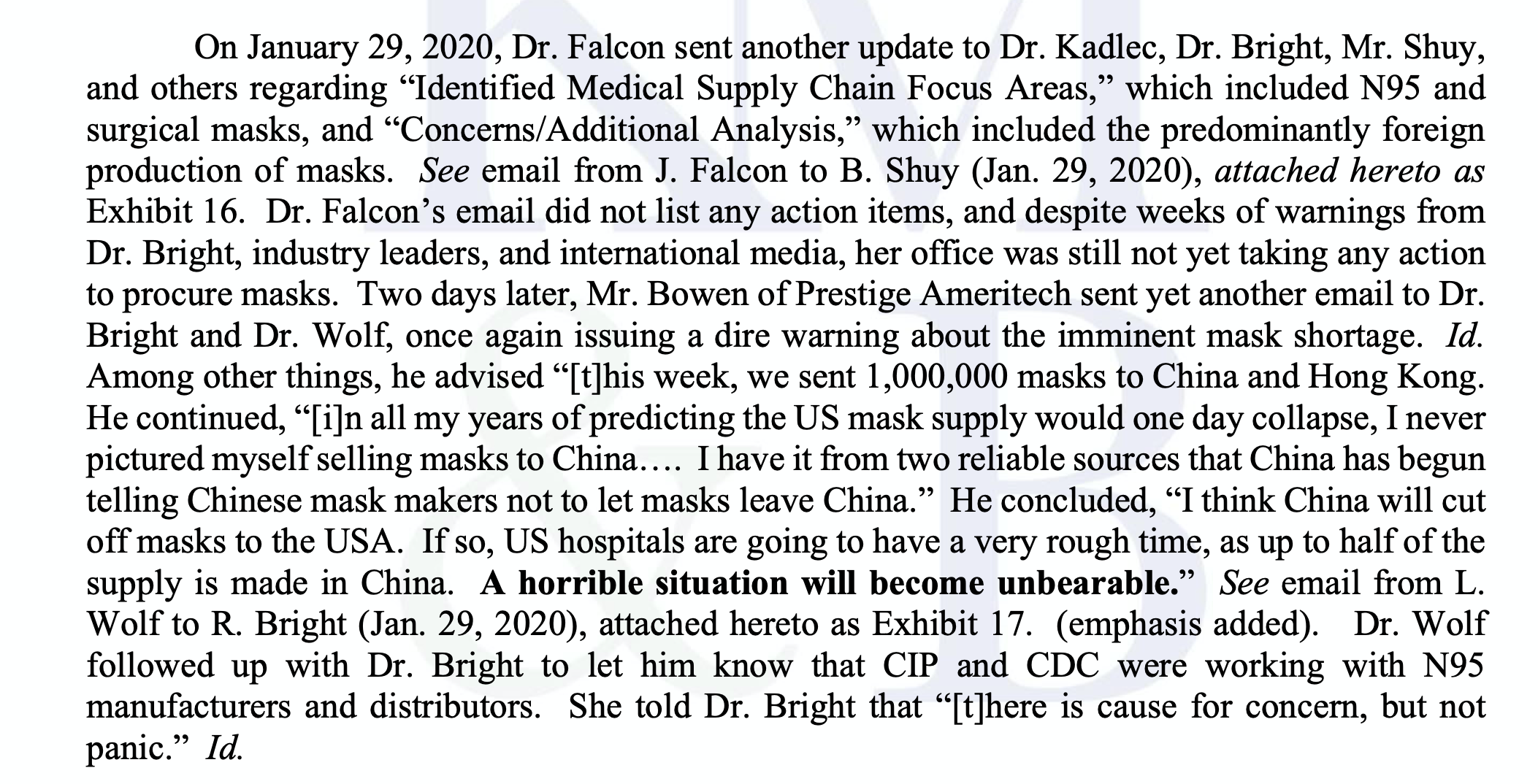 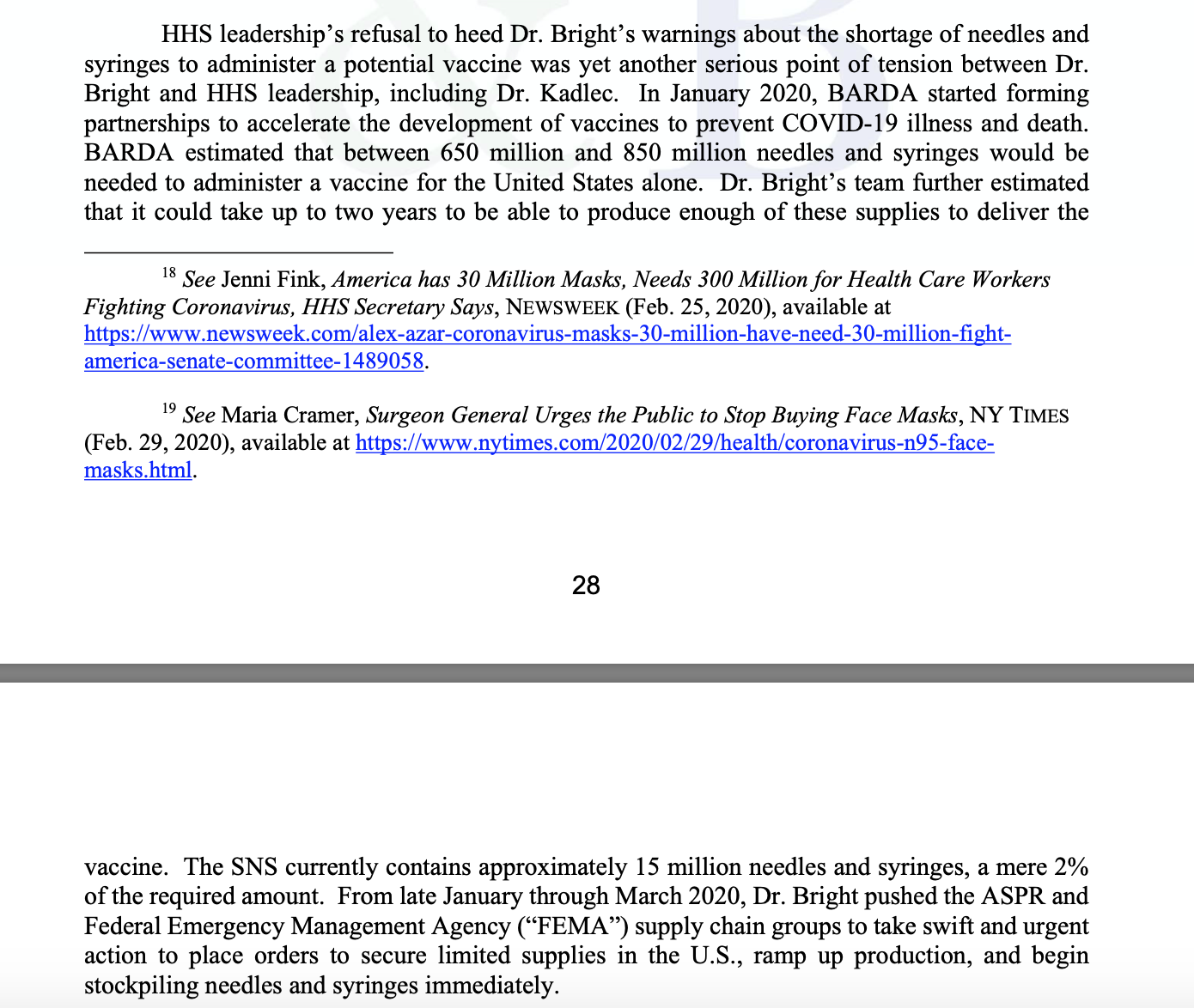 Here’s what Bright had to say: