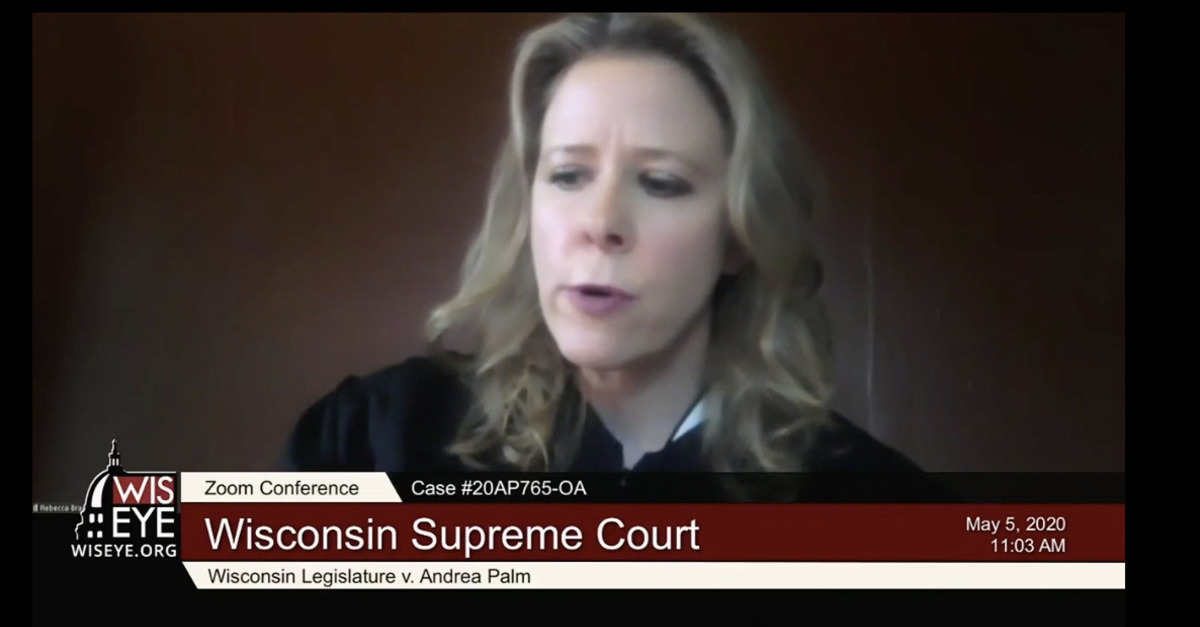 With so much idiocy floating around about how the Constitution guarantees us all the right to go to T.J. Maxx without wearing masks, it was bound to convince some judges somewhere to side with the let’s-die-for-the-economy set. Republican leaders in Wisconsin filed a lawsuit challenging Democratic Gov. Tony Evers’s administration’s measures to combat the coronavirus outbreak; the Wisconsin State Supreme Court Wednesday issued a ruling that seems to be logically derived from only dumbest parts of my Facebook feed. It struck down the state’s stay-at-home order as too intrusive on liberty interests using reasoning that was in equal parts baffling and offensive. The court’s ruling lifts all restrictions on businesses and gatherings, but paradoxically, keeps schools closed until fall. Because that makes sense.

As infuriating as it is to see opportunistic politicians using the courts to worsen the effects of a global pandemic, it’s far worse to see a court buy into ridiculous and offensive arguments. Midwestern conservatives seeking to open the state for business cast themselves as oppressed, woe-is-me victims on par with racial minorities and the subjects of government eugenics programs – and four justices were happy to buy the nonsense they were peddling.

The 4-3 decision includes a concurrence that is positively maddening to read; nestled in its unmasked distrust for public health and safety measures is a layer of self-righteous determination to protect the state from tyranny. Its twisted use of American legal history is enough to make even the most zealous patriot declare the American experiment an abject failure.

Judge Rebecca Grassl Bradley (a Scott Walker appointee) raises Thomas Jefferson’s warnings against despotic government, the words of the Declaration of Independence, and Wisconsonites’ reliance on being free and independent. Yes, yes. Everyone is a revolutionary in times of global pandemic.

We ought not, Bradley reasoned, be persuaded that “what is good for society” is actually constitutional. Mmm okay. I’ll bite. Whatcha mean there, judge?

According to Bradley, the stay-at-home order is a lot like eugenics. Having trouble following that bouncing ball? Allow me to elaborate on this dizzying bastardization of logic. A hundred years ago, Oliver Wendell Holmes ruled that it was constitutional for a mentally disabled woman to be sterilized against her will by the government. In retrospect, and in part because of the Nazis, American courts realized that it was a really bad idea to give the government the power to figure out who could reproduce and who could not.

“Eugenics,” Judge Bradley pointed out, “was built upon the notion of harm; indeed, it thrived on a sense of imminent doom.”

So — according to Bradley — we should also understand that taverns and hair salons must open to protect us from making a similar errors in moral judgment. Because — that makes sense?  (It doesn’t.)

Bradley didn’t stop there, either. She raised an even more disgusting parallel that had been debated during oral arguments. She warned that judges shouldn’t make the same mistake now that they once made in the Korematsu case. Korematsu was the Supreme Court case that upheld the government’s right to keep Japanese Americans in internment camps during World War II; the case, entrenched in racism and xenophobia, is widely regarded as one of the worst mistakes in American legal history – up there with Dred Scott and Plessy v. Ferguson. The Wisconsin court attempted to exempt itself from criticisms for drawing such a ridiculous parallel, saying it was only bringing up Korematsu “to remind the state that urging courts to approve the exercise of extraordinary power during times of emergency may lead to extraordinary abuses of its citizens.” Yeah, okay guys, good try. I’m going to just let George Takei handle this one:

I didn’t spend my childhood in barbed wire enclosed internment camps so I could listen to grown adults today cry oppression because they have to wear a mask at Costco.

The case was one in which the justices all wanted to be heard. Between the footnote-jousting and Chief Justice Patience Roggensack’s concurrence to her own majority opinion, it was a head-spinning piece of jurisprudence. Still, even after 161 pages, the actual effect of the court’s ruling is ambiguous. The stay-at-home order is struck down, but it appears unclear whether the majority’s order goes into effect immediately. What is clear is that the Evers administration will need to submit a new plan. Republican lawmakers have not introduced any proposal of their own.

If you are confused, you are not alone. Chief Justice Roggensack needs to clarify in an opinion whether she is or is not voting for a stay of the majority’s decision. If her concurrence is to be interpreted as merely a lament that she would stay it, then such a lament rings hollow.

Roggensack recently came under fire for dismissing a coronavirus outbreak at a meatpacking facility as not affecting “regular folks.”

Governor Evers had a sound bite of his own on the matter. He told reporters Wednesday that the Wisconsin Supreme Court “[threw] the state into chaos,” with its decision, and that, “Republicans own that chaos.”