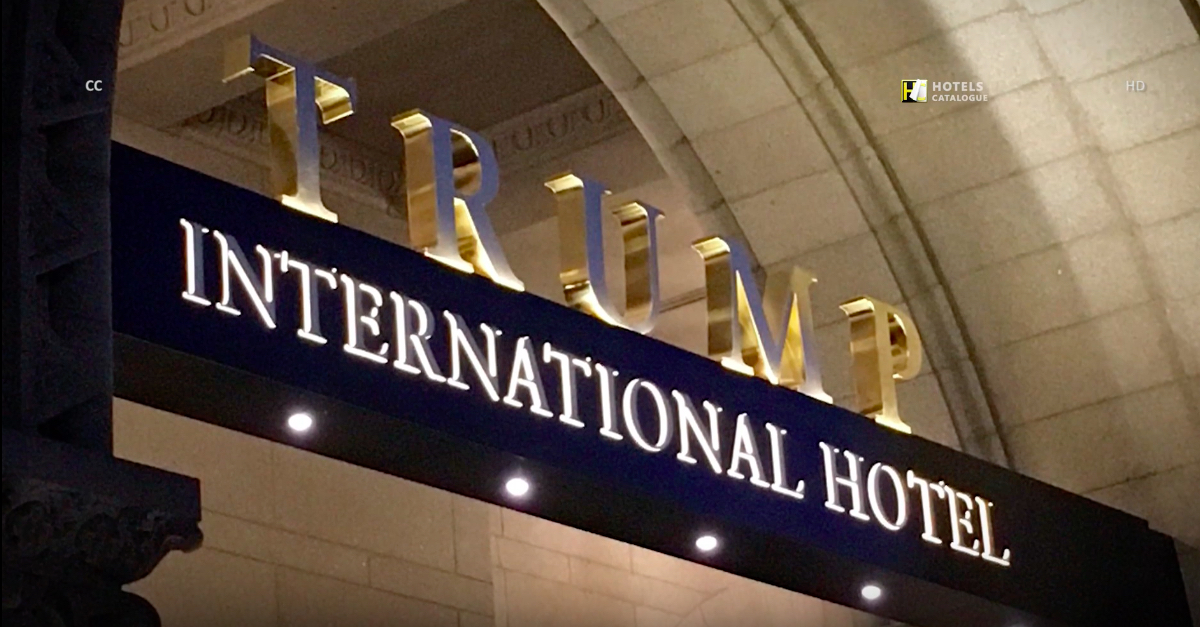 President Donald Trump’s family wants a break on the monthly rent they pay to the federal government for the lease on the Old Post Office building in Washington, D.C. which is currently the site of the all-but barren Trump International Hotel.

According to the New York Times, Eric Trump recently made the request on behalf of the Trump Organization to the U.S. General Services Administration (GSA) due to the dearth of hotel visitors that have placed the family’s business into predictably dire financial straits as a result of the novel Coronavirus (COVID-19) pandemic response.

The Trump Organization insists it simply wants the GSA to consider granting them relief similar to other federal tenants who may have caught a break in rent amidst the massive economic downturn.

“Just treat us the same,” the younger Trump said in a Tuesday statement. “Whatever that may be is fine.”

For fairly obvious reasons, the request to the GSA reads like a Joseph Heller-penned conundrum.

If the federal government management and support-focused agency accedes to the demand, then evergreen concerns about the hotel’s conflict of interest for the 45th president will be featured in sharp relief. If the GSA denies the request while at the same time cutting other GSA lessees slack on rent due then basic principles of equity, broadly understood, could lead to charges that the agency was being a little too cautious over the optics and that would likely invite a few tweets worth of scorn from the famously mercurial president.

The GSA, however, hasn’t signaled one way or another how they intend to respond to Eric Trump’s request for an abatement of the hotel’s nearly $270,000 monthly rent. The Trump Organization is reportedly current on their rent, unlike many millions of Americans hoping for such relief from their elected representatives and leaders.

But even the basic fact that the Trump Organization has asked the Trump administration for help has charged up the president’s critics who view the incident as the man himself effectively asking himself for the ability to slide on the amount due to the government.

“Last fall, GSA admitted to lawmakers that it wasn’t bothering to audit submissions from Trump’s hotel that claimed it wasn’t earning enough to trigger an increase in payments to GSA above the minimum,” noted former Office of Government Ethics director and dogged Trump foe Walter Shaub via Twitter. “Now the hotel wants a break on rent from GSA. Will GSA audit this request?”

“The President’s company is asking for a break on its lease payments for its DC hotel because of the pandemic,” observed Citizens for Responsibility and Ethics in Washington (CREW) Executive Director Noah Bookbinder in a Tweet as well. “The request is going to the landlord, which is the Trump administration. It’s hard to imagine a clearer case of a conflict of interest.”

If only the GSA had thought to put language in the lease specifically barring, say, an “elected official of the Government of the United States” from being “admitted to any share or part of this Lease, or to any benefit that may arise therefrom.” You live you learn, I guess.

Shaub, who also works with CREW, offered his own bit of sarcasm.

The rub, of course, is that language is, in fact, in the lease. But GSA has, for some reason, never substantively addressed their own non-compliance with the contract signed–even as Democratic senators and anti-corruption nonprofits have repeatedly raised concerns.

Other critics metabolized the news by musing about the pandemic’s overall influence on the Trump family business.

“Is anyone investigating whether Trump’s desire to end the shutdown is tied to the shutdown’s effect on Trump’s highly leveraged real estate company?” attorney and Hamilton Lincoln Law Center Director Ted Frank asked. “Maybe ending the shutdown is good! But the conflict of interest here is appalling and impeachable.”

The Times report notes that it has been something of a bloodletting; most of the president’s properties are shut down and those that aren’t are largely bereft of patrons; the Trump Organization paid rent late in Palm Beach County, Florida this month.

“In Florida, the very county that mandated we close is the very county collecting rent,” Eric Trump groused and echoed. “What are they doing for others? Just treat us the same.”