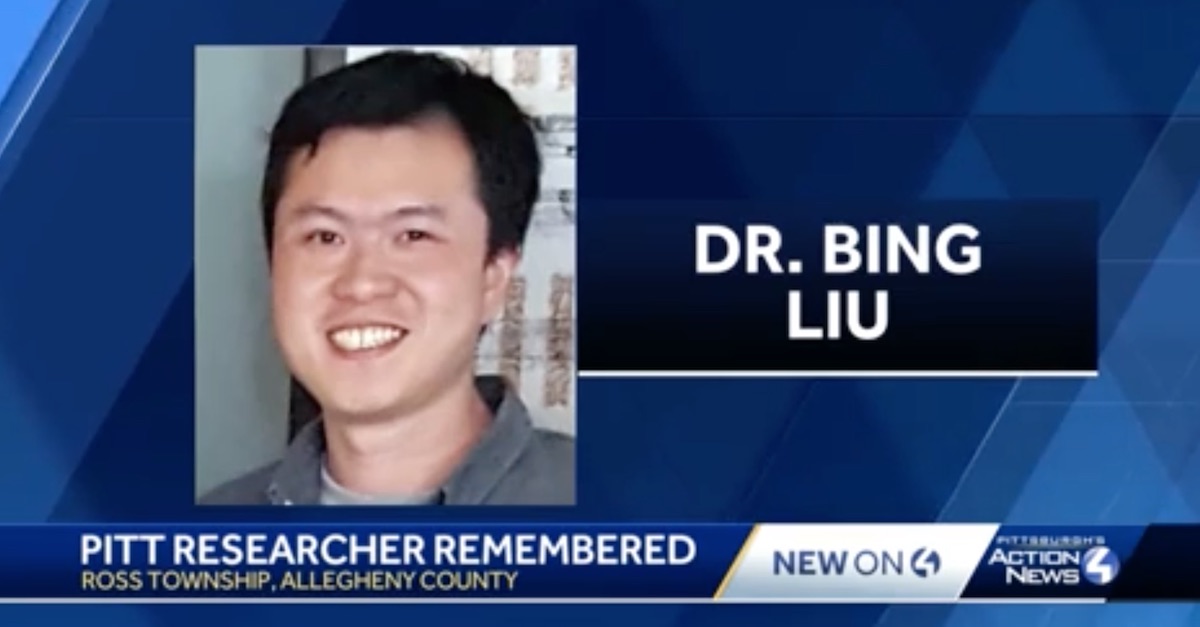 A 37-year-old molecular biologist whose department at the University of Pittsburgh said “was on the verge of making very significant findings” in his COVID-19 coronavirus research was shot and killed on Saturday in his Elm Court home.

Dr. Bing Liu was murdered by a man who later shot himself in his car, Pennsylvania police believe. That man has been identified as 46-year-old engineer Hao Gu. The first question that probably comes to mind is: Was this at all related to Liu’s work as an assistant research professor or, as his department put it, his study of the “cellular mechanisms that underlie SARS-CoV-2 infection and the cellular basis of the following complications”?

Authorities say that so far they haven’t found a professional connection. Rather, police think, the two men knew each other on a personal level.

“[W]e haven’t had anything at this point that has come to the investigation that has anything to do with Mr. Liu’s employment or his research,” Ross Township Detective Brian Kolhepp said, according to WTAE. “We have been able to establish that the two were aware of each other, knew each other and have knowledge of each other, which we believe will lead to the motive for this.”

A motive for what’s been ruled a murder-suicide is not entirely unclear. Kolhepp said that was the case because both of the deceased were Chinese nationals and it’s taking a while to translate the data on their phones.

“The cell phone data is still being worked on right now. Part of the problem that we’re having with that is that they were Chinese nationals and everything on their phones is in Chinese. So, we have some hurdles to overcome with the extraction and the translation of all that information,” Kolhepp said.

Later reports said that there had been a “lengthy dispute” about an “intimate partner.”