Celebrity attorney Lisa Bloom is promising to file a complaint with the Equal Employment Opportunity Commission (EEOC) on behalf a woman who says she was exposed to the novel coronavirus and who was fired after asking for prayers to help keep her safe. The former employee, Emily Ball, said in a recorded statement that her managers called the virus a “Democratic hoax,” said it was “nothing more than the flu,” and even called her “stupid” for raising concerns about being exposed to it.

In a written statement released Tuesday, Bloom said Ball worked at a country club in Oklahoma with members who, it turned out, had been exposed to the virus. Managers “brushed off” her concerns, the statement said. Eventually, one of the club’s members died from COVID-19.

“I knew everyone; then COVID hit,” Ball said of her customers in the video statement. “A member informed me that the coronavirus had come to the club. A member returning from Italy had tested positive for the coronavirus and was in quarantine.”

Ball said she and others had contact with the person who tested positive.

When she raised questions about the contact, Ball says one manager berated her and minimized the severity of the virus; later, she said, another manager told her to call her doctor. Her doctor told her to call officials at the health department. Officials there told her to quarantine.

Management at one point told her to go back to work.

Later, as Ball quarantined at home, she posted privately on Facebook a request for prayer.  It was National Prayer Day, March 15, 2020, she said.  The post complained of a lack of testing.  Ball also said she would have to drive to Oklahoma City if she became ill and if she wished to be tested. 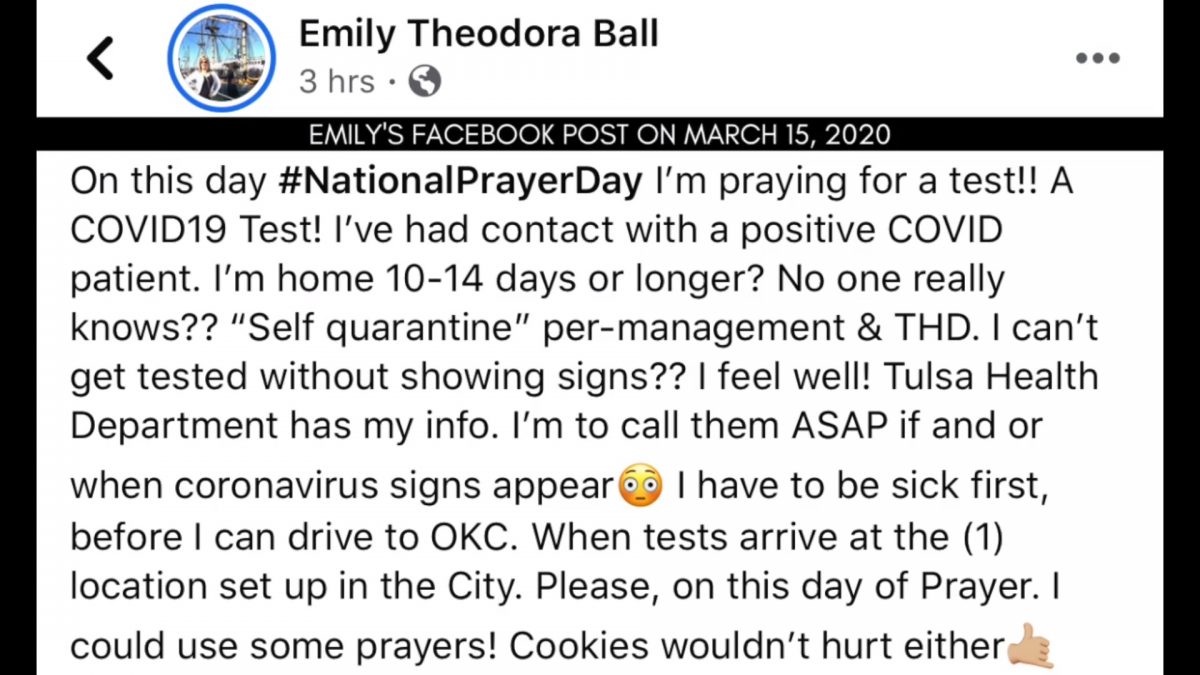 Management told her to take down the post if she wanted to keep her job. She said she took the post down at the request of her managers. “Nevertheless, the club fired her,” Bloom’s statement said.

“I was fired for speaking about coronavirus at the country club,” Ball said in the recorded statement. “I don’t want anybody else to go through this.”

“Too many workers are being fired for requesting simple warnings to protect themselves and others,” Bloom said.”We will shortly be filing a complaint with the EEOC in Oklahoma in this case. We currently represent many workers in similar cases and we stand with everyone who has the courage to insist on common sense safety measures during this deadly crisis.”

“Employees have a right to a healthy and safe workplace.  Oklahoma law mandates that,” said attorney Teri Gibbs, who works at Bloom’s law firm. “Under federal and Oklahoma law, employees cannot be retaliated against for voicing unlawful or unsafe work conditions.”

Gibbs characterized Ball’s Facebook post as an attempt to speak up about workplace safety concerns. Ball’s employer did not attempt to correct the problems or to protect employees, Gibbs said, but instead mocked and fired Ball for raising concerns.

Bloom, in the video statement, said the country club’s actions were “outrageous.”

“We may be in a national crisis, but the law is still there, and it protects workers,” Bloom said. She explained that the law also protects workers who are discriminated against based on a “perceived disability, like being exposed to the coronavirus.