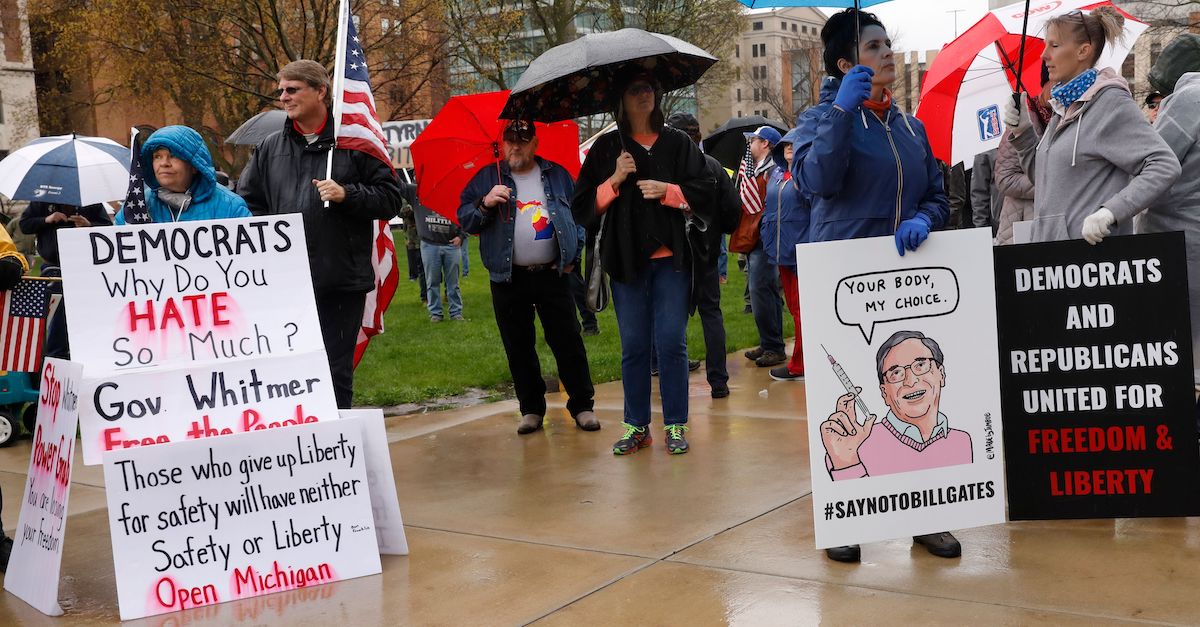 Embattled Michigan Gov. Gretchen Whitmer (D) was hit with another lawsuit on Monday in federal court. The latest one alleged numerous violations of the Constitution. It also offered some unusual proof that Whitmer’s “lockdown orders” are unconstitutionally vague: the number of frequently asked questions (FAQs) suggest “ordinary people” have no idea what is and what is not a crime these days.

The lawsuit, filed by Michigander Paul Mitchell III in the U.S. District Court for the Western District of Michigan, claimed that Whitmer has “continued to issue stricter and unclear executive orders that unreasonably and unnecessarily interfere with constitutional rights under the rubric of a continuing ’emergency,'” even though Whitmer’s stated goal of flattening the curve has been reached.

“On March 11, 2020, Governor Whitmer issued Executive Order 2020-04, which declared a ‘state of emergency’ based upon two presumptive diagnoses of coronavirus disease (‘COVID-19’), a respiratory illness caused by the severe acute respiratory syndrome coronavirus two (the ‘coronavirus’). Shortly thereafter, the Governor began issuing orders that required Michiganders to remain at home and closed most businesses with limited exception, under pain of criminal penalties,” the lawsuit began. “The Governor stated that the initial orders were premised on the perceived emergency need to ‘flatten the curve’ so as to avoid overwhelming the State’s hospitals and healthcare centers, not to eradicate the virus. Objective data and reporting shows that the curve was flattened during the first week of April 2020.”

The plaintiff claimed that Michiganders “can and do take reasonable, private action to protect themselves from infection without the need to shut down civil society” (the filing did not mention the recent mass gatherings in protest both outside of and inside the State Capitol). The lawsuit also said that Whitmer has no legal or factual basis to continue “mandatory lockdown orders under criminal penalty” because the “projected surge” of cases has not occurred.

At issue here is Whitmer’s extension of state of emergency orders until May 28. Michigan Attorney General Dana Nessel said the orders are enforceable under the Emergency Powers of the Governor Act. The plaintiff argued that is not so.

Mitchell wants a federal judge to declare that Whitmer’s “lockdown orders” have violated the Emergency Powers Act and multiple clauses of the U.S. Constitution: the Due Process Clause, the Privileges and Immunities Clause, the Equal Protection Clause of the Fourteenth Amendment, and the Guarantee Clause of Article IV, Section 4. The lawsuit cited restrictions on travel, speech, association, property interests, medical access, and commerce, to name a few.

But wait—there’s more. The plaintiff wants Whitmer’s orders voided for being constitutionally vague [emphasis ours]:

The void-for-vagueness doctrine requires penal laws to define criminal conduct with sufficient precision that ordinary people can understand what conduct is prohibited, and in a manner that does not encourage arbitrary and discriminatory enforcement.

The Lockdown Orders purport to carry the force of law and (with the exception of Director Gordon’s Emergency Rule) makes any willful violation of their terms a misdemeanor punishable by imprisonment or a fine. It is therefore subject to the void-for-vagueness doctrine. The very fact that the Governor needs a webpage to answer “frequently asked questions” about the scope of the order shows that it’s vague. Michiganders are smart people. If “ordinary people” could understand the Lockdown Order, then there would be no need for 125+ FAQs on these orders on the State’s coronavirus webpage.

Mitchell’s lawyers say this is a serious problem, especially for those unsure about what does and what does not constitute essential and nonessential medical procedures.

“Because Mitchell cannot travel out of state for medical procedures as alleged in Counts II and III, he desires to seek medical treatment for his medical condition at an in-state medical facility,” the lawsuit said. “No Michigander, including Mitchell, should be forced to choose between risking criminal prosecution and economic sanctions under the Lockdown Orders on the one hand, or seeking medical treatment on the other.”

In addition to the declaratory judgment, plaintiff seeks a preliminary and permanent injunction barring enforcement of the executive orders.

Gretchen Whitmer sued in fe… by Law&Crime on Scribd