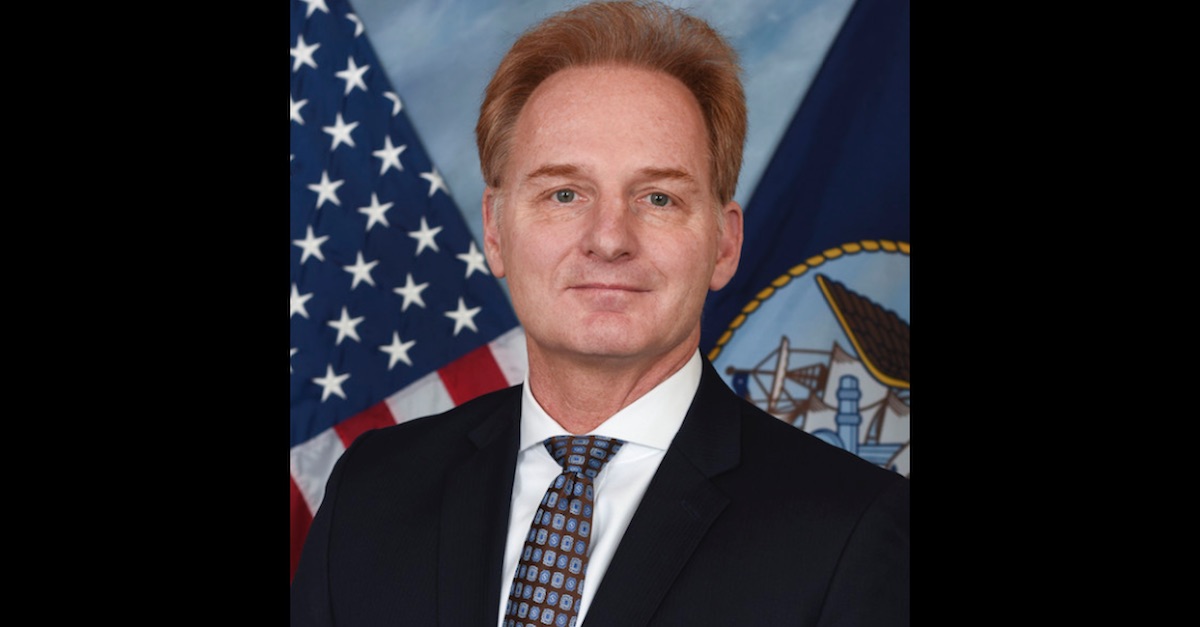 President Donald Trump’s Acting Navy Secretary Thomas Modly brutally ripped Brett Crozier, the coronavirus-infected Navy captain who was removed from his post for warning of the contagion’s threat to his sailors through the media.

In case you missed it, after Crozier was canned the crew of the USS Theodore Roosevelt gave him a send off with cheers and chants. The videos of this went viral; accusations of Trump administration political revenge soon followed.

“Keeping over 4,000 young men and women on board the TR is an unnecessary risk and breaks faith with those Sailors entrusted to our care,” Crozier wrote in a letter sounding the alarm over coronavirus. Modly said previously that Crozier’s dire warning letter, sent through “non-secure unclassified email” to a “broad array of people,” was the wrong thing to do.

“I have no doubt in my mind that Captain Crozier did what he thought was in the best interest of the safety and well-being of his crew,” Modly said. “Unfortunately, it did the opposite. It unnecessarily raised the alarm of the families of our sailors and Marines with no plans to address those concerns.”

In a speech to the USS Theodore Roosevelt crew after Crozier’s ouster, Modly went even further. He called Crozier’s actions a “betrayal” (read it here). A recording of the speech exists. One can hear a crew member say “what the fuck” when Modly says Crozier was either too stupid or too naive to captain this ship if he believed his warning letter wouldn’t have caused the controversy that it did in this day and age.

He said that if Crozier had sent his warning to the chain of command in a confidential way that would have been “perfectly fine.” Instead, Crozier committed an act of “betrayal,” Modly said.

“He was betrayal [sic]—of trust, with me, with his chain of command, with you, with the 800 to a thousand people who, with your shipmates on shore right now, busting their asses every day to do what they need to do to convert what they do in a normal day to get you guys off of her, get you safe, get you healthy, get you clean, and get you back on this ship where you are supposed to be,” he said. “It was betrayal. And I can tell you one other thing: because he did that he put it in the public’s forum and it’s now become a big controversy in Washington, D.C. and across the country. About a martyr [commanding officer], who wasn’t getting the help he needed and therefore had to go through the Chain of Command, a chain of command which includes the media.”

Modly said that “there is never a situation where you should consider the media a part of your chain of command.”

“Because the media has an agenda and the agenda that they have depends on which side of the political aisle they sit, and I’m sorry that’s the way the country is now, but it’s the truth. And so they use it to divide us and use it to embarrass the Navy. They use it to embarrass you,” he said. (Notably, a copy of the speech was obtained by the Daily Caller, a right-wing media outlet. Others are now reporting on the speech as well.)

The acting Navy secretary went on to tell the crew why he thought Crozier needed to be sent packing.

“Because it is the mission of the ship that matters. You all know this, but in my view, your Captain lost sight of this and he compromised critical information abut your status intentionally to draw greater attention to your own situation,” he said. “That was my judgment and I judged that it could not be tolerated of a Commanding Officer of a nuclear aircraft carrier. This put you at great risk even though I am certain that he never thought it never would.”

He then issued a dire warning of his own: If every commanding officer acted like Crozier, then it wouldn’t be long before “we would no longer have a country.”

“There was very little upside in this decision for me. You can believe that or not. I made a decision for the Navy I love, for the Navy I served in, and now serve for, and mostly for the sailors I am responsible for. Not just here but on nearly 300 other ships in the Fleet. Your Captain’s actions had implications for them, too. Imagine if every other CO also believed the media was a proper channel to air grievances with their Chain of Command under difficult circumstances. We would no longer have Navy. Not long after that, we would no longer have a country.”

“Still, I understand that you may be angry with me for the rest of your lives,” Modly acknowledged. “We will get you the help that you need. You have my personal word on it. Your CO had my personal word on that from day one. Whatever else you may think of me, I don’t go back on my word.”

[Image via Department of Defense]