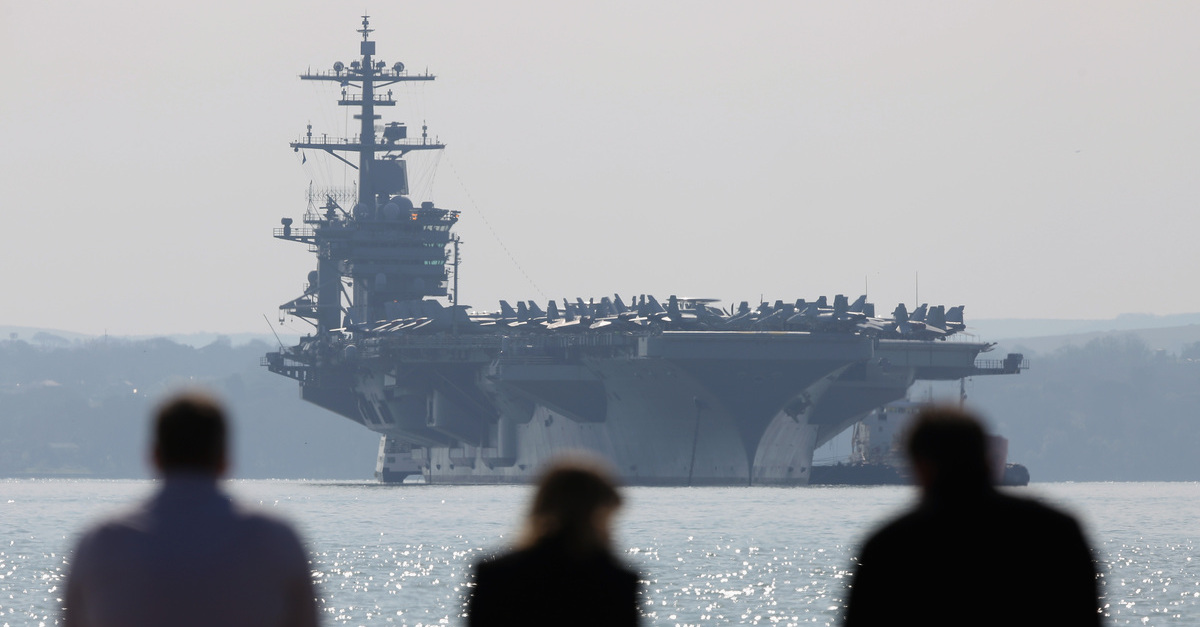 People gather on the sea front to look at the USS Theodore Roosevelt on March 23, 2015 in Gosport, England.

An attorney for the intelligence community whistleblower whose report led to President Donald Trump‘s impeachment says that recently fired Navy Captain Brett Crozier should file a reprisal complaint for what appears to be a politically-motivated dismissal.

Late Thursday it was reported that Capt. Crozier was being relieved of duty after he made comments critical of the administration’s response to the novel Coronavirus (COVID-19) pandemic.

“If this is for his disclosure about the health and safety concerns about his sailors, then it would be reprisal,” Compass Rose attorney Andrew Bakaj tweeted. “He needs to file a reprisal complaint with DoD OIG. #Whistleblower #COVIDー19 #USSTheodoreRoosevelt.”

Bakaj elaborated in an email to Law&Crime:

As a general premise, I am concerned about the perception that the Secretary of the Navy is relieving the Captain after he reported his concerns about the health and safety of his ship’s crew. This is why I believe he should file a whistleblower reprisal complaint under 10 U.S.C. Section 1034 with the Department of Defense Office of Inspector General. The reason why he should do this is because his disclosure to his superiors about the health and safety of his crew is protected by law. Should he have been relieved of command for it, it would be retaliatory.

Until being relieved, Crozier commanded the USS Theodore Roosevelt, a 5,000-strong aircraft carrier named after the famous progressive Republican Party president who served at the turn of the 20th century. Though fired, the captain will still hold on to his rank and remain in the sea-faring service branch.

An NBC News report noted the extent and impact of Crozier’s criticism:

Crozier raised the alarm earlier this week that sailors on the ship need to be quarantined to stop the spread of the virus. His plea for assistance quickly made headlines.Crozier sent a letter to the Navy on Monday begging for help addressing the coronavirus outbreak aboard his ship, which was forced to dock in Guam last week.

The ship leadership began testing everyone on board. By Wednesday, there were 93 positive test results and more than 1,000 people had departed the ship into isolation on Guam. In total, 2,700 people are expected to disembark the ship this week, with a smaller crew remaining to maintain the ship.

Those alarm bells were reportedly raised by way of a “strongly worded letter” which somehow made its way to the media.

Bakaj explained the delicate nature of a situation like this [emphasis in original]: “[W]hen a whistleblower reprisal investigation commences, the investigators look to determine whether the action (in this case the Captain being relieved of Command of the U.S.S. Theodore Roosevelt) was taken in retaliation OR whether the action should have occurred irrespective of the disclosure.”

“This is where this matter comes to bear: there is an allegation that the Captain leaked this memorandum to the media,” the whistleblower attorney noted. “I don’t know if this is true or if someone else did this. But this is where the case will be made or lost.”

Bakaj went on to note that “members of the armed forces can’t just go to the press.”

“Stepping back, it’s important to know what the Captain did or didn’t do,” he continued. “We don’t know whether it was the Captain himself who leaked the memorandum to the press, or if someone else did and he’s taking the fall. If it’s the latter, then I would submit that this is retaliatory. If he provided this to the media, this would be problematic.”

The Trump administration, however, insists it was the way Crozier made the criticism that accounted for his firing.

The gripe, to hear Acting Navy Secretary Thomas Modly tell it, was that Crozier sent the letter via “non-secure unclassified email” to a “broad array of people.”

But Modly also heaped scorn on the warning itself.

“I have no doubt in my mind that Captain Crozier did what he thought was in the best interest of the safety and well-being of his crew,” Modly added. “Unfortunately, it did the opposite. It unnecessarily raised the alarm of the families of our sailors and Marines with no plans to address those concerns.”

Wow this was fascinating. Modly claims the buck stopped with him, denied that Crozier leaked the letter, although contradictoraly implied the leaking of the letter and its publication was the real issue, & that Crozier panicked. It’s tempting to see this as bad optics & reprisal. https://t.co/lGUovtUleR

Editor’s note: this article has been amended post-publication to include additional remarks from Andrew Bakaj.