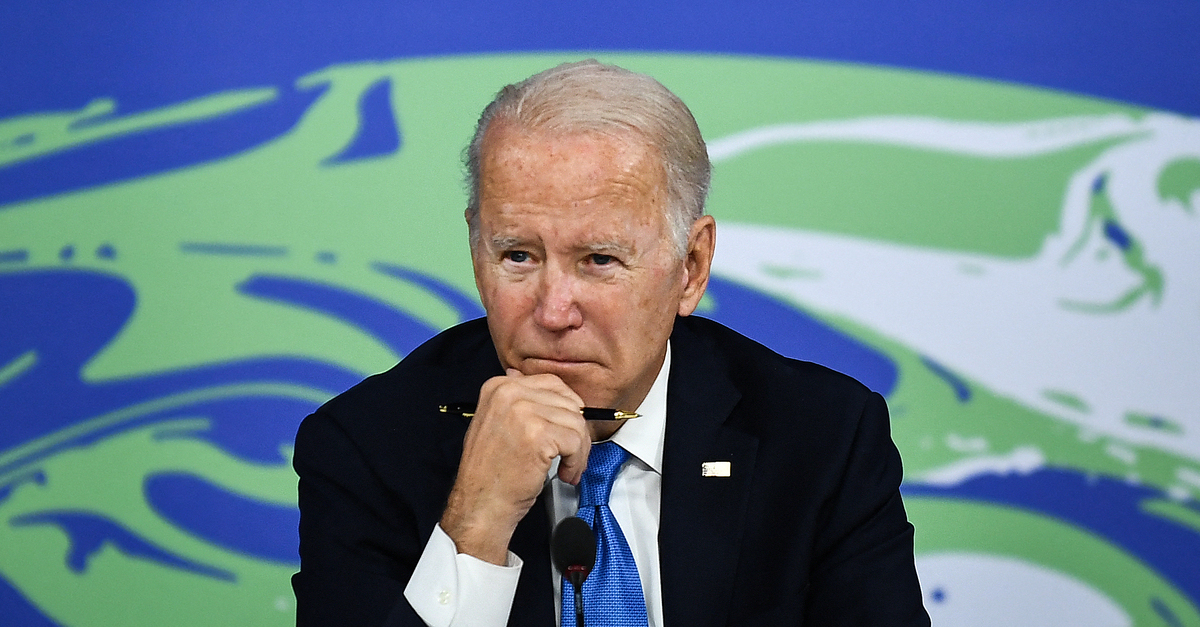 President Joe Biden reacts during a meeting on “the Build Back Better World (B3W)”, as part of the World Leaders’ Summit of the COP26 UN Climate Change Conference in Glasgow, Scotland, on November 2, 2021.

Two environmental conservation advocacy groups filed a massive federal lawsuit against the Biden administration on Wednesday in an effort to invalidate thousands of drilling permits in the Western United States. They claim that by authorizing drilling for oil and gas, the federal government has threatened the health and safety of endangered species.

Plaintiffs Center for Biological Diversity and WildEarth Guardians filed a 254-page civil complaint against the U.S. Department of the Interior and U.S. Bureau of Land Management for issuing over 3,500 oil and gas drilling permits in New Mexico and Wyoming during the first 16 months of the Biden administration.

The groups say that issuing these permits violate the Endangered Species Act, the National Environmental Policy Act, and the Federal Land Policy and Management Act, because the drilling is certain to harm the environment. The plaintiffs say that the drilling will release up to 600 million tons of greenhouse gases over the life spans of the wells, which will in turn worsen the climate crisis, damage ecosystems, and harm more than 150 animal species, including Hawaiian songbirds, polar bears and coral reefs. The case was filed in U.S. District Court for the District of Columbia.

The plaintiffs allege that the federal agencies violated federal law by failing to even consider the harm that would result from the emissions produced by drilling on public lands. The Endangered Species Act, argue the plaintiffs, requires federal agencies to use the best available science to assess the potential harm caused by their activities, specifically including the danger posed to endangered species.

and 1 percent of global emissions. It also alleges that BLM shirked its duty as a federal agency when it “myopically considered the localized impacts of a small subset of license approvals,” but “failed to take a hard look at cumulative impacts, ignored the effects that additional greenhouse gas pollution would have on climate-imperiled species, and failed to prevent the unnecessary and undue degradation of public lands.”

The lawsuit calls into question the 2008 legal opinion written by then-Solicitor of the Department of the Interior, David Bernhardt. In the opinion, Berhnardt said that even when a proposed action would add carbon to the atmosphere, the Department is not required to study the impact on endangered plant or animal species.

Bernhardt, a lawyer and oil and gas lobbyist, went on to become the Secretary of the Interior under Donald Trump in 2019. Bernhardt also served as the designated survivor for the 2020 State of Union.

Bernhardt wrote that “science cannot say that a tiny incremental global temperature rise that might be produced by an action under consideration would manifest itself in the location of a listed species or its habitat,” and that “any observed climate change effect on a member of a particular listed species or its critical habitat cannot be attributed to the emissions from any particular source.”

Environmental experts have said that the appropriate inquiry is not the specific detriment caused by a particular pollutant, but rather, the cumulative contribution to the climate crisis that is at stake.

“Fossil fuels are driving the extinction crisis, and the Bureau of Land Management is making things worse by failing to protect these imperiled species,” Brett Hartl, government affairs director at the Center for Biological Diversity, said in a statement. “The agency’s cursory approval of more than 3,500 drilling permits contradicts President Biden’s pledges to address the terrifying threat of climate change.”

“Every new well takes polar bears and many other species one step closer to extinction,” Hartl continued.

The Center for Biological Diversity and WildEarth Guardians are asking the district court to invalidate and revoke the oil and gas permits in question as violating federal law.

A spokesperson for the Department of the Interior declined to comment on the lawsuit.