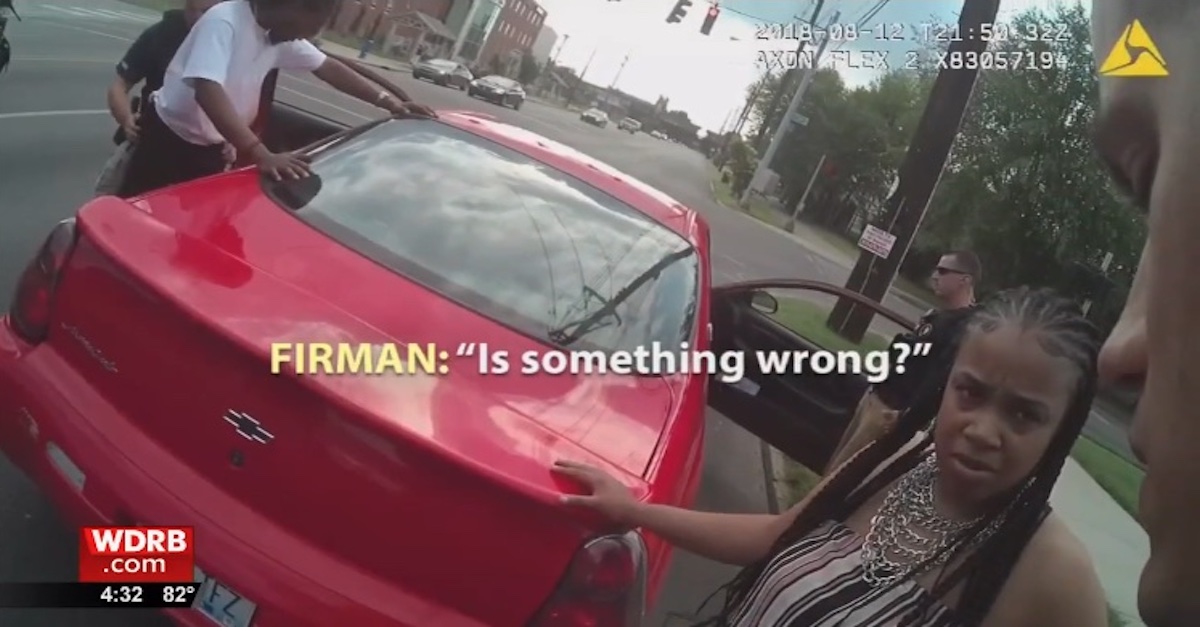 The city of Louisville, Kentucky, has paid a couple $75,000 to settle a discrimination lawsuit arising out of a 2018 traffic stop, according to a report from local Fox affiliate WDRB.

Anthony Parker and Demetria Firman were driving home from church on August 12, 2018 when they were pulled over by Louisville Metropolitan Police officers, who they claim made up a reason to get the couple out of the car and search them without their consent, according to the complaint.

Parker, who was driving Firman’s car at the time, was ostensibly pulled over for failing to use a turn signal, according to the federal complaint. Four officers surrounded the car. Parker’s 9-year-old son was in the back seat of the car at the time, the complaint said.

Bodycam video showed that Parker had, in fact, properly signaled his turn.

“[B]ecause they are black, were in a nice car, and were in a designated target neighborhood of LMPD, they were pulled over for these reasons only, were boxed in by unmarked LMPD vehicles, were frisked without reasonable suspicion,” the complaint alleged.

Firman’s car and purse were also “torn apart without consent or reasonable suspicion in a desperate attempt by the officers to find guns and drugs,” the complaint also said. “They did not.”

The couple was only allowed to leave the scene “when it became apparent to the officers that Demetria and her fiancé were personal acquaintances with a colleague of the officers,” the complaint said.

The officers did not issue a ticket to either Parker or Firman.

The city settled the lawsuit in August, according to court records. Local Fox affiliate WDRB reported that under the settlement, the Louisville metro government “acknowledges no wrongdoing,” and Parker and Firman agree to “refrain from disparaging officers.”

The lawsuit was one of several ongoing lawsuits from 2018 alleging racial bias by the LMPD’s Ninth Mobile Division, according to WDRB. Two of the officers named as defendants, Kevin Crawford and Gabriel Hellard, were also sued after pulling over a teenager for making a wide turn—a traffic stop that resulted in the department implementing new department policies for pulling people over and removing them from their cars and handcuffing them, WDRB reported.

Crawford was also named in a lawsuit filed by a man who was with a mentally disabled passenger when he was pulled over and frisked while a dog and officers searched the car.

Crawford has since resigned from the department, and is now a patrol officer for the Jeffersonville Police Department in Clark County, Indiana, WDRB reported.

The settlement closes at least one chapter in the LMPD’s beleaguered recent history. In March 2020, police killed Black medical worker Breonna Taylor in her apartment during a botched search warrant execution; in November 2020, an investigation revealed that Louisville police had concealed hundreds of thousands of documents relating to officers sexually abusing teenagers.

In April, the U.S. Department of Justice announced an investigation into the use-of-force practices of the Louisville/Jefferson County Metro Government and the LMPD.

“The Investigation will assess whether LMPD engages in discriminatory policing, and also whether it conducts unreasonable stops, searches, seizures, and arrests, both during patrol activities and in obtaining and executing search warrants for private homes,” the DOJ said in a press release at the time.

You can read Parker and Firman’s complaint, below.