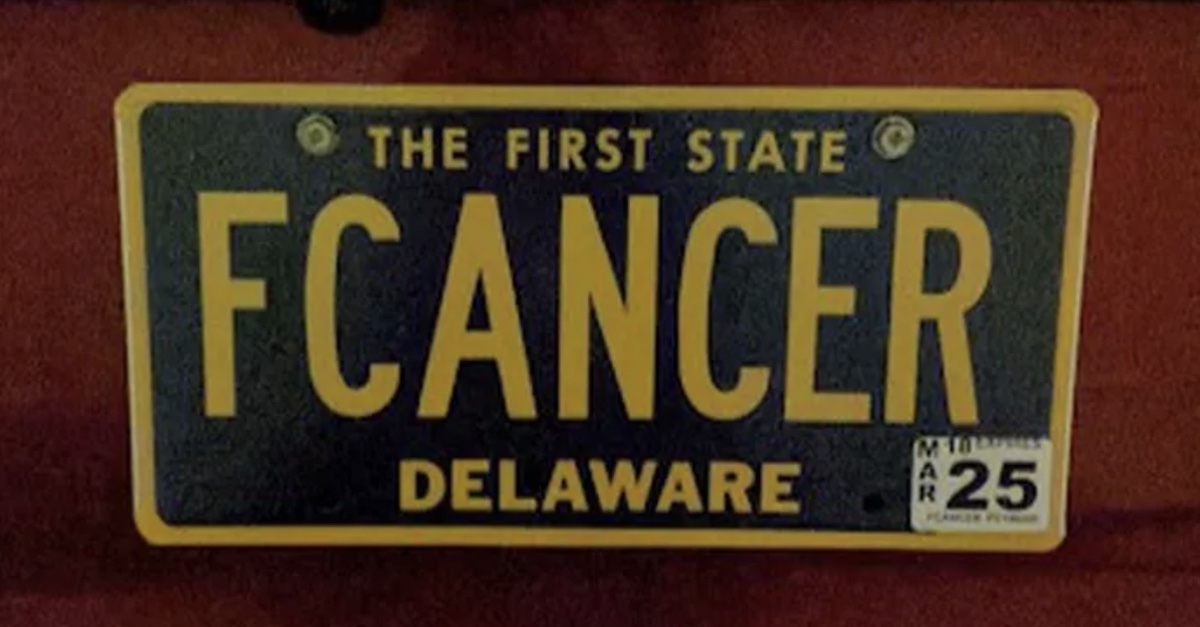 A federal judge ruled that a Delaware woman raised a “significant constitutional issue” in her lawsuit against the state’s Division of Motor Vehicles for the revocation of her vanity license plate reading “FCANCER.”

Kari Lynn Overington, 41, was initially granted the license plate in 2020 only to have it revoked six months later with a statement by a DMV employee that the plate “does not represent the division and the state in a positive manner.”

Overington filed a civil complaint in federal district court in Delaware against three Delaware state officials. Overington appeared in the case pro se, without legal counsel, and simply filled out the brief complaint form used by the court. In it, Overington said that she “was a recent survivor of an aggressive form of breast cancer,” and that she followed all the necessary procedural steps for reserving and obtaining the vanity plate. Overington argued that the Delaware administrative code relating to vanity plates was unconstitutional and asked that the court issue an injunction to stop the DMV from refusing or recalling vanity plates on the basis of the statute.

U.S. District Judge Richard G. Andrews, a Barack Obama appointee, sided with Overington at the motion to dismiss phase. Andrews wrote that the case presents a “significant constitutional issue.” In Andrews’ two-page order, the judge praised Overington, and noted that, “Plaintiff, a non-lawyer, has intelligently presented her case this far.”  The judge continued, however, that “a constitutional issue of the sort raised here ought to be decided through the adversarial process with both sides of the issue being presented through counsel.” Despite Overington not requesting a court-appointed attorney, the judge wrote that he would contact the Clerk’s office to see whether counsel might be appointed to support Overington’s claim as an amicus curiae. Including court-appointed counsel in this way means that Overington would not be responsible for any legal fees, and any attorney appointed would not represent Overington. As an amicus, though, that attorney would litigate the case from the same point of view as Overington’s, and would raise arguments to the court that would support Overington’s case.

The case will next proceed through the discovery process. Should it fail to settle before trial, the trial judge would ultimately face the task of assessing whether the applicable Delaware administrative code provision violates the First Amendment on its face or as applied to Overington.

The case has potential to raise several distinct constitutional issues.

There is the question of whether a vanity license plate constitutes government or individual speech. If it is deemed government speech, Delaware would be entitled to full free speech rights including the right to disallow certain plates. But if a vanity plate is deemed individual speech, the court would then need to assess whether “FCANCER” is protected — an analysis that would require a determination as to whether the plate is profane or obscene.

Overington’s case is not the only recent litigation over state license plate practices. In 2021, Law&Crime reported a lawsuit filed by Mississippi car owners and nonreligious advocacy groups against Mississippi that argued the inclusion of “In God We Trust” on the state’s standard-issue license plates violated their First Amendment free speech and free exercise rights. That lawsuit is still proceeding through the litigation process.

The U.S. Supreme Court decided a landmark First Amendment case involving license plates in 1977 when it ruled that New Hampshire could not force its citizens to display its “Live Free or Die” state motto on license plates attached to personal vehicles.

SCOTUS also handed down a recent unanimous ruling that may be directly applicable to Overington’s case. The high court ruled in May that the City of Boston violated the First Amendment by refusing to fly a Christian group’s flag in front of City Hall. SCOTUS found that the flag, though displayed on government property, did not constitute government speech. Should a court similarly find that vanity license plates constitute individual protected speech, Overington may well prevail in her quest to keep the “FCANCER” plate.

Charles “C.R.” McLeod, the Director of Community Relations for the Delaware Department of Transportation, provided the following statement via email to Law&Crime:

DMV’s position regarding vanity plates is any request that contains obscenity, vulgarity, profanity, hate speech, or fighting words will be denied. ​Unfortunately, the plaintiff’s license plate violates this policy, even though we appreciate and sympathize with the sentiments behind it. We are disappointed that the judge did not consider the email communications between the parties, because those emails contain the admission by the applicant that the plate does stand for a profane word. The DMV intends to defend its position and will evaluate its options regarding vanity plates going forward.

Overington did not immediately respond to request for comment.