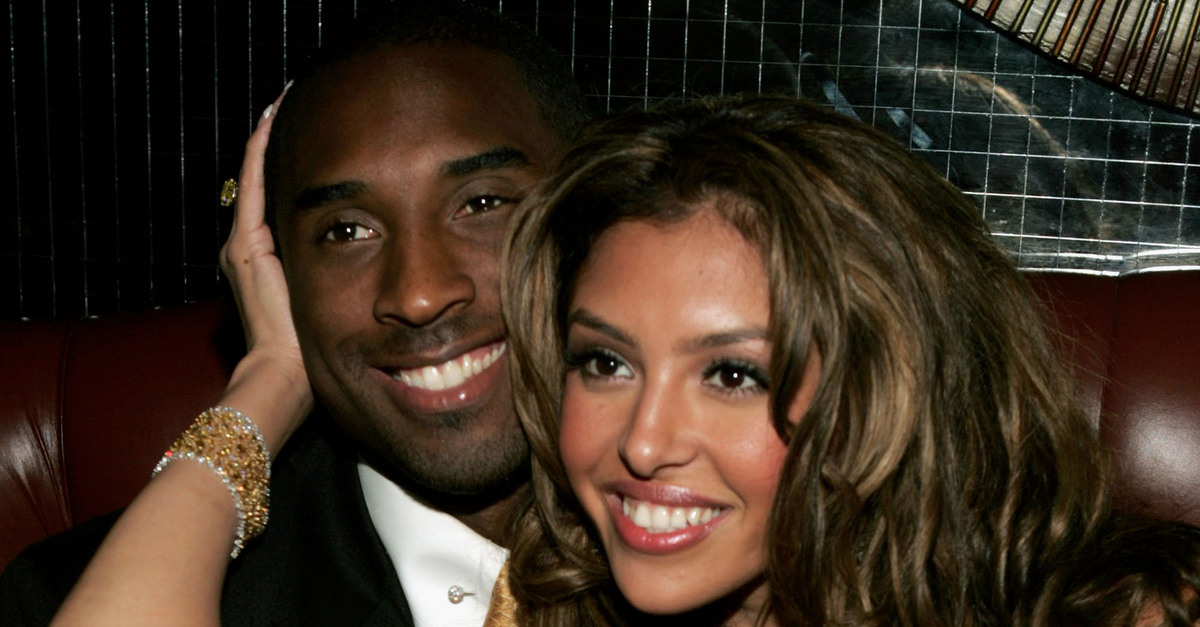 Basketball player Kobe Bryant and his wife Vanessa were photographed at the official after party for the 2004 World Music Awards, September 15, 2005 at Body English in the Hard Rock Hotel in Las Vegas, Nevada. (Image via Frank Micelotta/Getty Images.)

As Vanessa Bryant‘s civil lawsuit against Los Angeles County moves toward trial, attorneys for both sides are engaged in the usual pretrial jousting matches over what evidence should and should not be shown to jurors. One major piece of evidence Bryant appears determined to keep out of court is her Instagram account. One legal question relevant to the judge’s decision whether to admit Bryant’s posts is whether the posts are relevant to the calculation of damages — that is, whether Bryant suffered emotional distress that is directly attributable to Los Angeles County.

Bryant is suing the county for improperly sharing graphic photos of the tragic helicopter crash that killed NBA star Kobe Bryant, his 13-year-old daughter Gianna Bryant, and seven others in January 2020. The lawsuit alleges that first responders shared images of the crash with multiple sheriff’s deputies, allowing the gruesome pictures to be secreted on personal cell phones and later to become a source of gossip within the department.

L.A. County has admitted that photos were taken, were shown internally among personnel, and that at least one photo was shown to a person at a bar. A primary issue in the case is whether Bryant suffered emotional distress as a result of the county’s actions — and if so, how much she should be compensated for that distress.

In documents filed with the U.S. District Court in California, L.A. County said it seeks to introduce Bryant’s Instagram account as it appears online. The county argues that the posts are in Bryant’s own words and constitute “critical evidence probative of Plaintiff’s claim of emotional distress.” According to the county, jurors should decide for themselves how much emotional distress Bryant has suffered in part by looking at Bryant’s own words and photos. In its filing, the county explains its interest in showing these posts: “What was Plaintiff posting about the loss of her family members, the helicopter crash, and the issues in this lawsuit? What was she saying about what and how she was doing?”

Bryant opposes the introduction of her Instagram posts at trial on several legal grounds. She argues that the posts are irrelevant to the case, that they would confuse or waste the time of the jury, that they are hearsay, and that they would create unfair prejudice in part because they show Bryant’ financial condition.

The filing shows many examples of Bryant’s social media posts, including some that showcase Bryant and her family socializing with celebrities and enjoying lavish vacations.

A sampling of these posts, taken from the court filing (the entirety of which you can view here), is shown below: 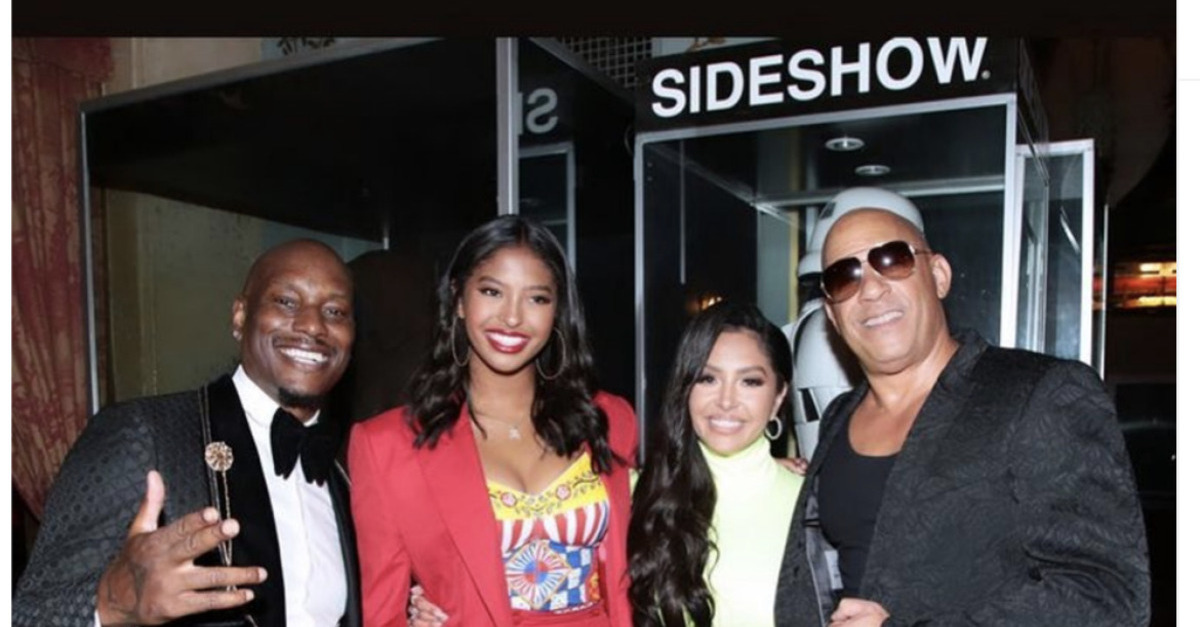 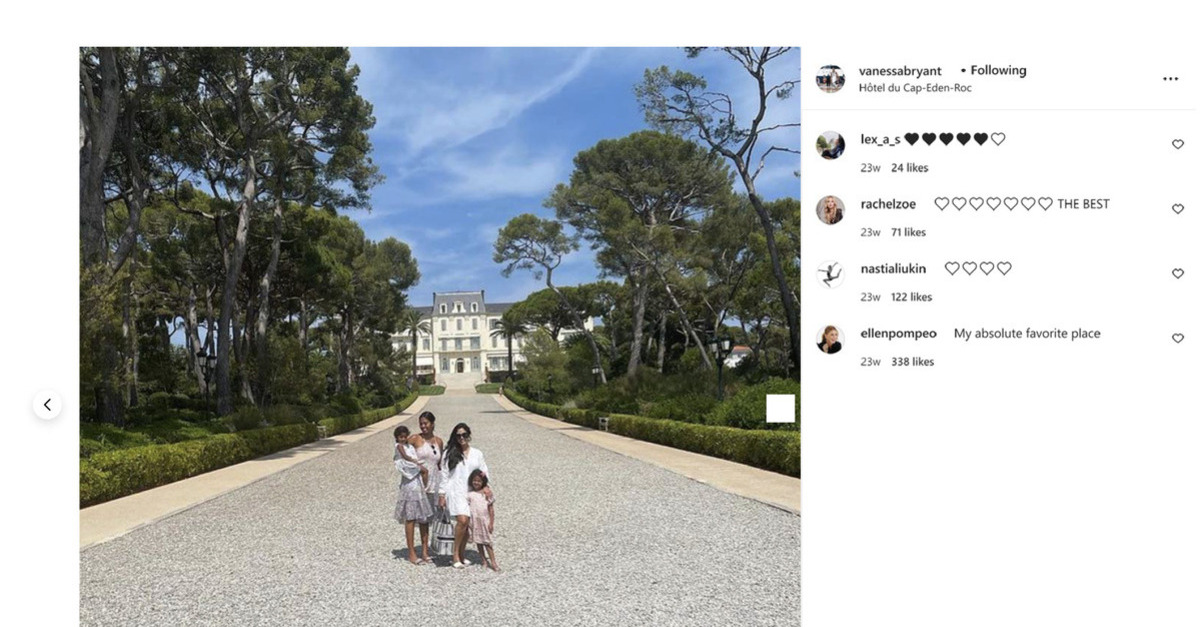 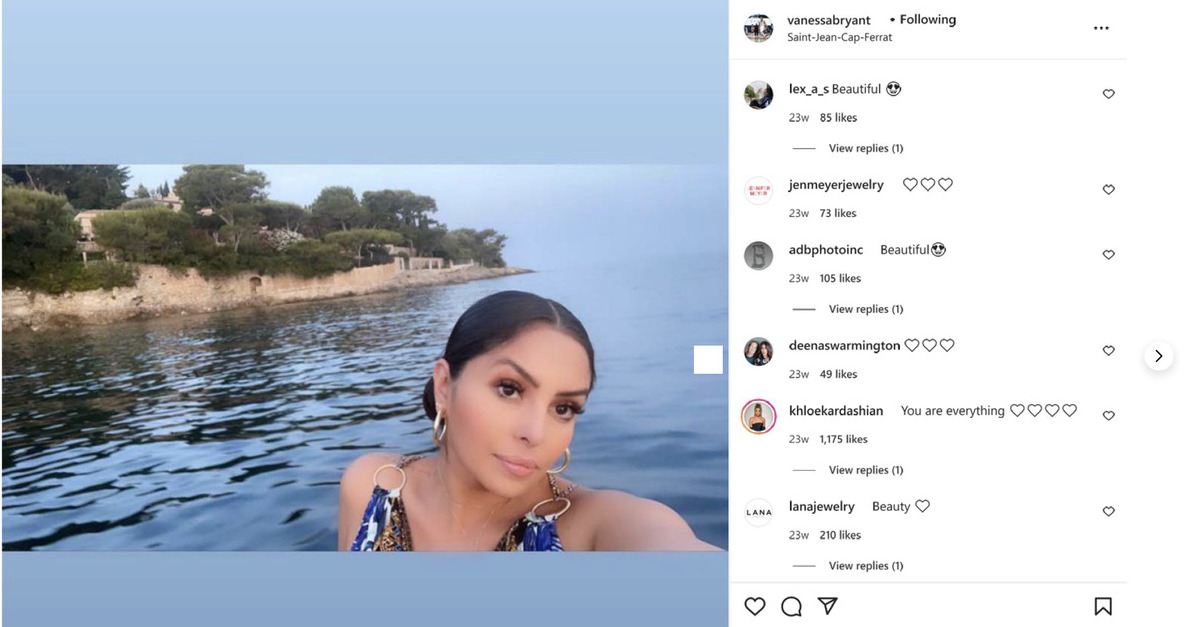 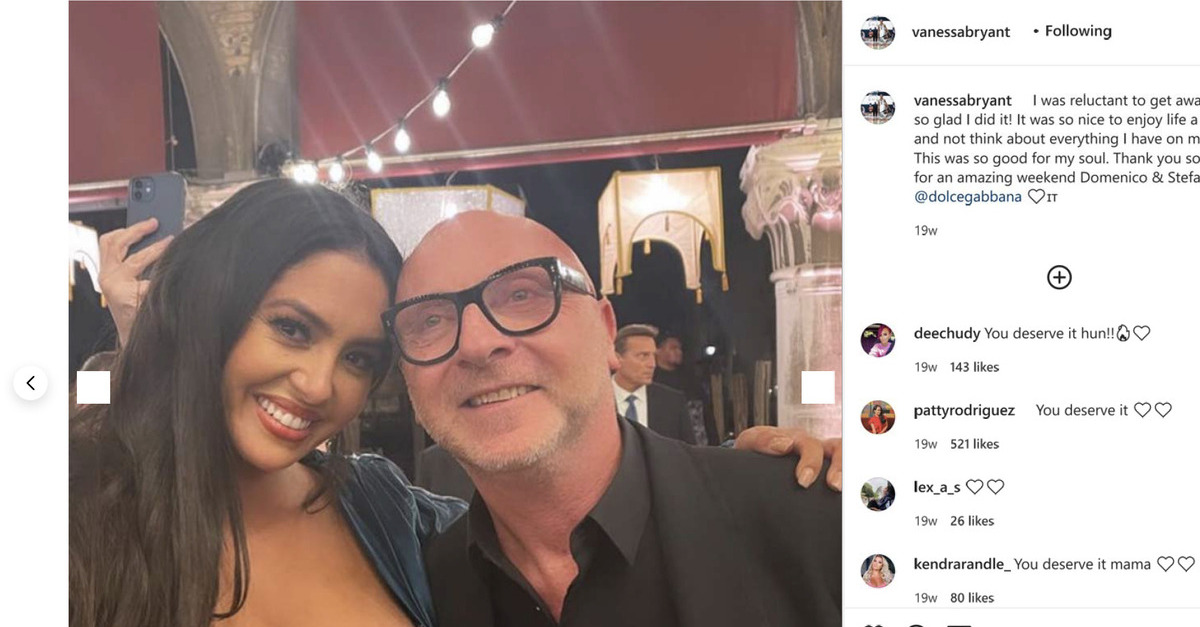 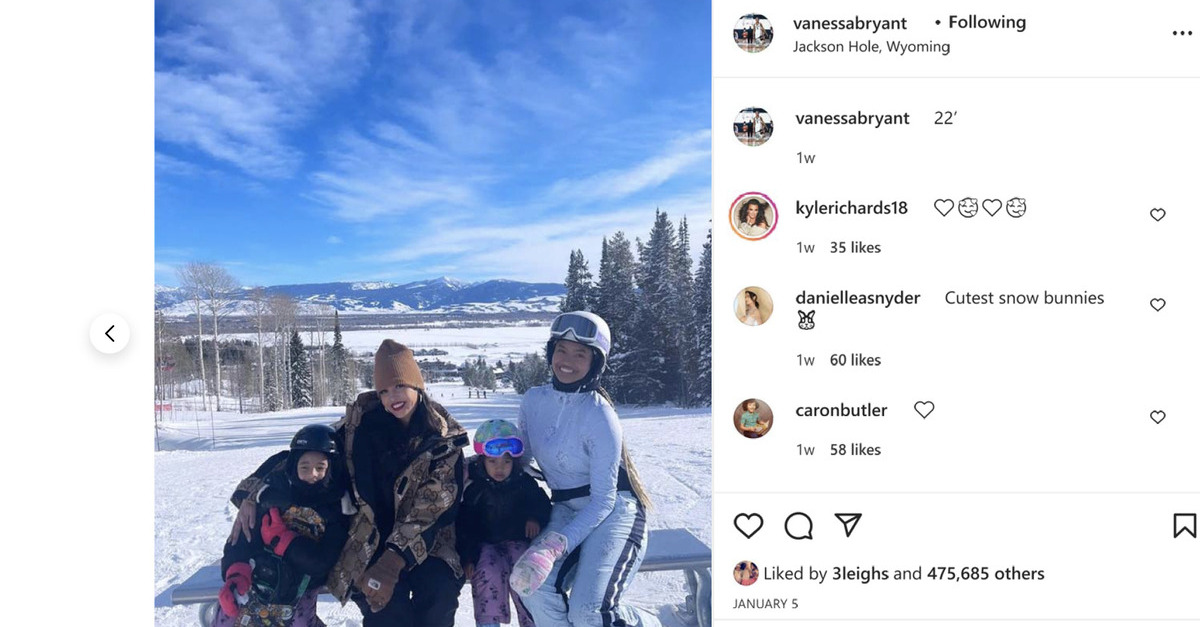 Two posts, however, may pose a particularly interesting legal issue for the court. On October 31, 2021, Bryant posted two photos of herself dressed as the Disney character Cruella de Vil from the 101 Dalmatians franchise. In one post, Bryant included the following caption:  “They say there are five stages of grief:  Denial, anger, bargaining, depression, and acceptance. Well, I’d like to add one more . . . revenge.” Bryant attributed the quote (which was from the 2021 movie Cruella) to the title character. 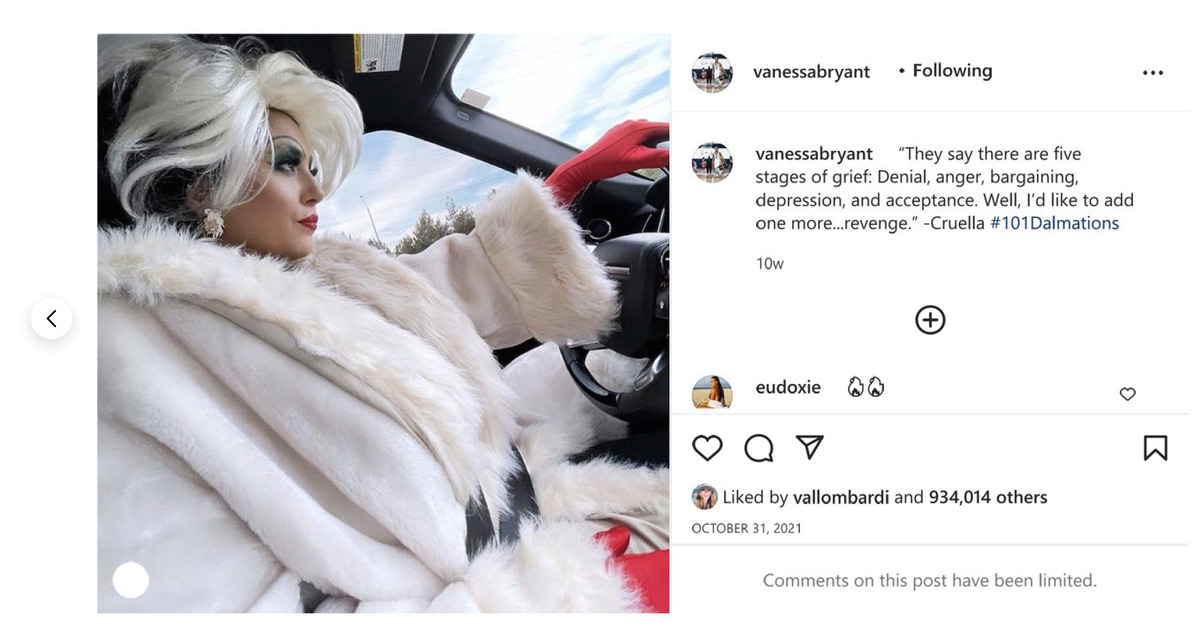 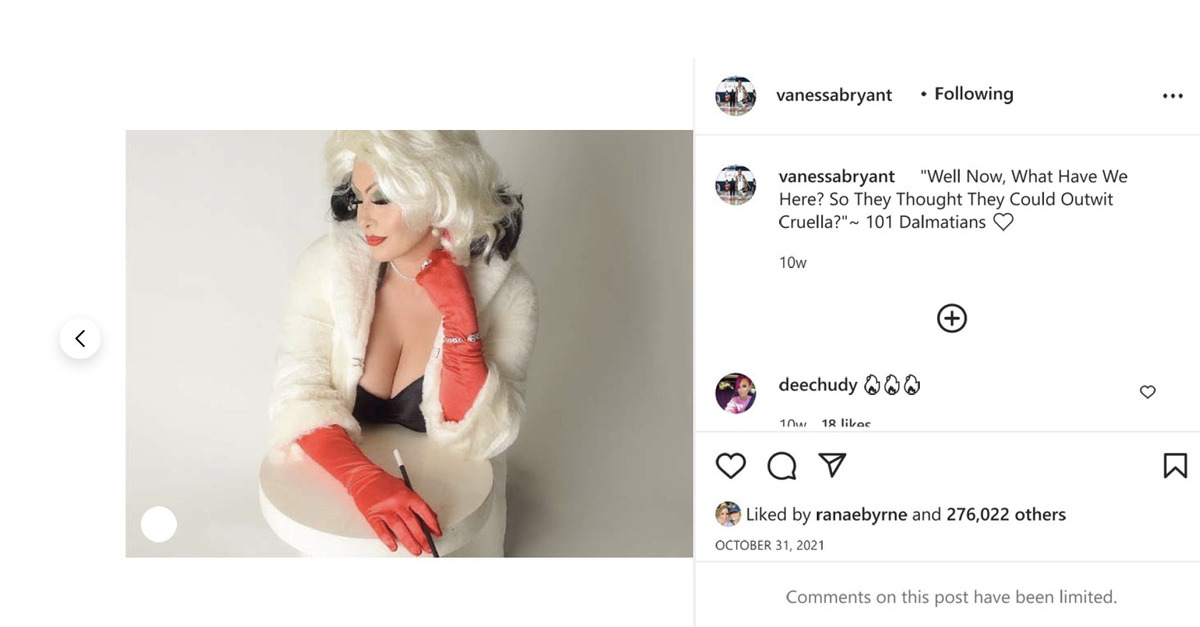 L.A. County argues in its filing that there is “significant” probative value to introducing Bryant’s social media posts. Per the filing:

A primary argument advanced by the county is that any emotional distress suffered by Bryant is attributable to the fatal crash itself — not to the improper sharing of photos.

In addition to social media posts, Bryant has asked the court to disallow any mention of her prior wrongful death action against Island Express Helicopters or the confidential settlement of that lawsuit. A month after the crash, in February 2020, Bryant sued the helicopter company and alleged that the pilot had been negligent and had violated flight safety rules.

The parties settled that lawsuit in June 2022. Bryant now argues that any mention of the wrongful death lawsuit or of her “financial condition” would cause “prejudice, confusion, and/or waste of time” for the jury.

Bryant is also asking the court to block any reference to a 2021 lawsuit she settled with her mother, Sofia Urbieta Laine. In that case, Laine, 68, filed a complaint in California state court which alleged that Bryant defrauded her by having her work for years without pay as a personal assistant and nanny. Laine said that during his lifetime, Kobe Bryant promised to financially support her.

In August 2021, after the case settled, Bryant told E! News that her mother was “continuing to try and find ways to extort a financial windfall from our family” and that her mother had never been a personal assistant or nanny.

“I have always been a stay-at-home mother and my husband and I were our daughter’s full-time care givers,” Bryant said.

Terms of the settlement between Bryant and her mother have not been made public.

U.S. District Judge John F. Walter (a George W. Bush appointee) is expected to rule on these and the parties’ other evidentiary disputes in the coming weeks.