‘Let the Record Reflect I Have Repented of My Sins’: Youngest Defendant Charged in Jan. 6 Attack Wants to Represent Himself, Appears to Assert Sovereign Citizen Talking Points to Judge 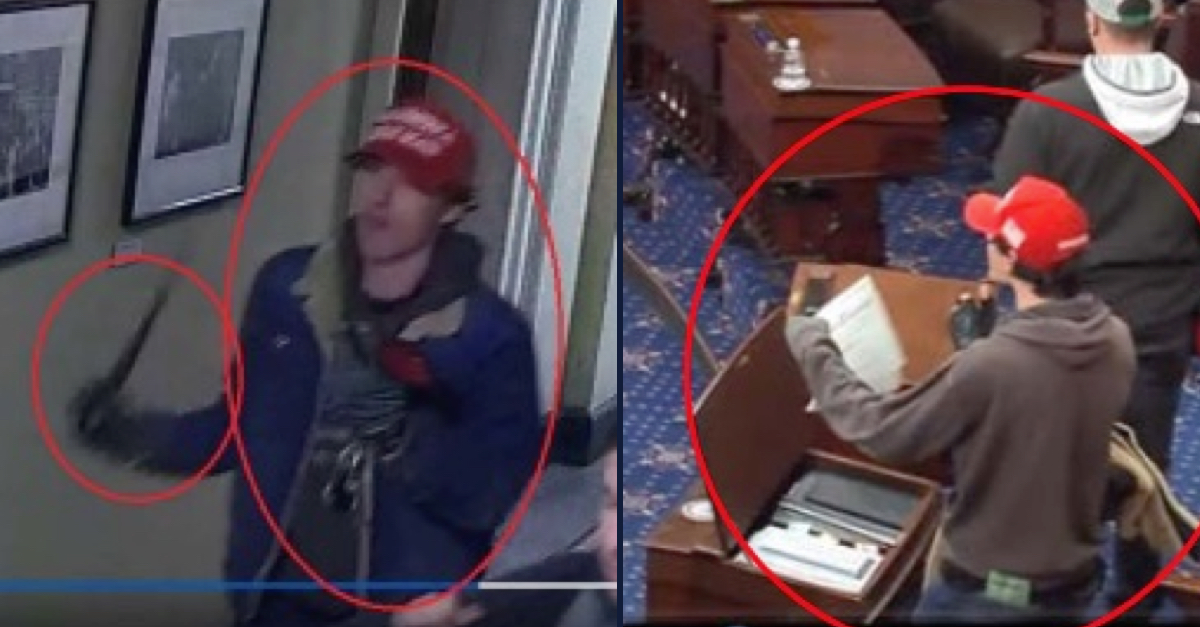 The youngest person charged in the Jan. 6 attack on the U.S. Capitol is apparently striking out on his own.

Bruno Joseph Cua, a Georgia man who was 18 at the time he allegedly stormed the Capitol along with scores of other Donald Trump supporters angry over the results of the 2020 election, appeared before U.S. District Judge Randolph Moss on Tuesday. He indicated that he was considering representing himself, and also said that he wanted to settle the case — all while repeating what sounded a lot like “sovereign citizen” talking points.

On Monday, Cua’s lawyers Jonathan Jeffress and William Zapf had filed a motion to withdraw as counsel.

“Recently, the attorney-client relationship between counsel and Mr. Cua has become irretrievably broken due to a fundamental disagreement regarding legal issues and a course of action,” the motion said. The lawyers said that providing additional details would violate attorney-client confidentiality, but noted that Cua had consented to the motion and had indicated to the lawyers that he “wishes to proceed pro se at this time.”

Moss, a Barack Obama appointee, started the hearing by listing several filings from Cua that were apparently the lawyers’ motion to withdraw.

“Those are not recognized pleadings,” Moss said. “I’m not quite sure what to make of those, but we need to decide how to proceed. Let me ask Mr. Cua: is your dissatisfaction with your current counsel, or with any counsel? In other words, are you looking for a new lawyer, [or] do you want to represent yourself?”

Cua, appearing by video, did not directly answer Moss’ question.

“Good morning, Your Honor,” Cua said. “I’m here by special appearance, not a general appearance,” he continued, echoing fellow Jan. 6 defendant Pauline Bauer, who had memorably told the judge in her case, Trump-appointed U.S. District Judge Trevor McFadden, that she was appearing in his court by “special divine appearance.”

Those are fairly standard statements for followers of the “sovereign citizen” movement, which relies on conspiracy theories and misinformation to justify adherents’ apparent belief that they are exempt from U.S. law.

During a back-and-forth between judge and defendant, Moss tried to clarify what Cua meant, to no avail.

“I don’t know where you found this material, but I have no idea, frankly, what you’re talking about,” Moss eventually replied, after Cua repeated his “special appearance” statement.

Cua repeated some of his talking points, and then asked: “What need is there for an attorney?”

Moss told the defendant that if he wanted to represent himself, the judge would need to have a separate hearing in order to ensure that Cua was making the decision to go pro se knowingly and voluntarily, after having been informed of the risks.

Moss then ran down the list of charges against Cua, including obstruction of an official proceeding, which carries a potential 20 year prison sentence, and engaging in violence in a restricted building or grounds while carrying a deadly and dangerous weapon, which is punishable by up to 10 years behind bars.

“Those are really serious charges, and before you make a decision you want to proceed on your own, which would be unwise … you have a constitutional right to do so, if that’s what you want to do,” Moss said.

He then proposed an in-person hearing, noting that he was “not inclined to do that by video conference given the importance of the decision.”

“I’m not here to testify,” Cua said when Moss asked when he could appear in court. “How may I settle this today?”

Moss warned Cua that if he didn’t answer his questions, he would send the U.S. Marshals Service to arrest him and bring him to Washington for a hearing.

“You can’t represent yourself if you’re not capable of answering a question of the Court,” the judge added.

“Let the record reflect I have repented of my sins,” Cua said as the back-and-forth continued.

“If you don’t answer my question I’m going to have to order you to be arrested,” Moss said, again asking Cua when he can come to Washington for a hearing.

After taking a brief break to talk with his lawyers, Cua had an answer.

“Judge, the end of next week would be the best,” he said.

Moss set a hearing for July 28. He told Jeffress and Zapf that he would hold off on ruling on their motion to withdraw, and then turned to Cua.

“In the meantime, Mr. Cua, if you’re unhappy with the representation by Mr. Jeffress and Mr. Zapf, I would urge you to talk to another lawyer just to get a second opinion,” Moss said, adding that he could appoint an attorney for Cua if he wanted advice on whether to have a lawyer at all.

“I cannot impress upon you enough the seriousness of this decision, given the gravity of the charges against you and the difficulty of representing yourself,” Moss said.

“In the end it’s going to be your decision whether you want to do that or not,” Moss added. “It’s a really important decision [and] I want to make sure you have all the information.”

Cua is, as Moss described, accused of multiple felonies, including fighting with a plainclothes police officer while using a baton.

In a filing from March 2021 opposing Cua’s release from pretrial custody, prosecutors say that he was also seen “sitting atop the Senate dais, in the chair previously occupied by former Vice President Mike Pence, with his feet up on a the desk.”

“Other CSPAN footage shows the defendant documenting paperwork from a Senator’s desk on his cellphone,” prosecutors added.

Prosecutors also note Cua’s allegedly extensive social media posts, including a Jan. 8, 2021 missive on the right-wing website Parler that “[t]here will be no ‘warning shot’ next time.”

Moss did agree to release Cua from custody in March 2021 after Cua tested positive for COVID-19. The court docket shows that on May 5, 2022, Moss modified Cua’s conditions of release to remove location monitoring.