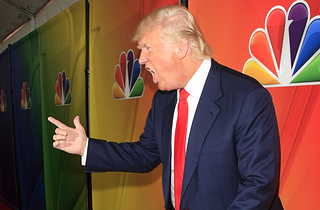 Throughout his presidential campaign, a lot of attention has been given to the contracts that Donald Trump has employees sign, and specifically the non-disclosure agreements contained therein. Among others, former campaign manager Corey Lewandowski, low-level campaign volunteers, and even ex-wife Ivana Trump have all signed paperwork in which they were not allowed to talk. On Friday, another Trump-related contract came to light via The Daily Beast, one that maybe should have been kept secret: The one signed by contestants on “The Apprentice,” Trump’s now-defunct reality competition show produced by Mark Burnett, the creator of “Survivor.”

The Daily Beast devoted its headline to the clause that allows the producers to film the contestants in the nude, but while that does sound strange for “The Apprentice” specifically, it’s not out of the ordinary for reality shows. However, if you read on through the article, it becomes clear that they buried the lead. Apparently, contestants had to be tested for “HIV, Hepatitis B, Hepatitis C, HPV, syphilis, chlamydia, gonorrhea, and here.” Why? This part might explain it: According to the contract which was viewed by Daily Beast reporters, contestants must agree “that Producer may impose one or more Series Rules regarding the type of sexual activity, if any, that participants will be permitted to engage in.” Explaining THAT is where it gets dicey.

To parse exactly what’s going on here, we spoke to Bobby Samini, an entertainment lawyer whose clients include Donald Sterling. “It would be normal and customary to see provisions that, for example, completely restrict sexual activity between cast members and/or others related to the production.” According to Samini, the difference here is that the producers are reserving the right to enforce rules about “the type of sexual activity” contestants engage in, which makes it clear that this is not simply a “no fraternization” policy.

The first question that comes to mind is if that is even legal. To Samini, that’s pretty cut and dry: “The provision likely only applies to the show and is unlikely to be enforceable outside of filming and production.”

With that out of the way, we have the other big question: What would the rationale for such a strange provision even be? Samini has an interesting theory: “It seems absolutely plausible that the provision is intended (indirectly) to prevent same sex activity. Considering the demographic of The Apprentice viewer, it certainly could be a means to prevent displays of LGBT sexual activity without saying so directly.” Of course, in the event that was the case, it would mean trouble for the show. “If the contract provision has some discriminatory intent, it is highly likely that a Court would decline to enforce the terms,” Samini explained.

The strange specificity is what makes this so out of the ordinary and prone to speculation. Samini notes that “if the clause gave the producers the opportunity to prohibit any or all sexual activity (without giving them the ability to specify the ‘type of’) and assuming it was applied by the producers to everyone equally, there would be little to discuss here.” In other words, even if Samini’s theory about the “why” is wrong, it’s still a profoundly weird piece of contractual language.

LawNewz has reached out to a representative for Trump to get a comment on this story. We’ll update this space if we get a response.