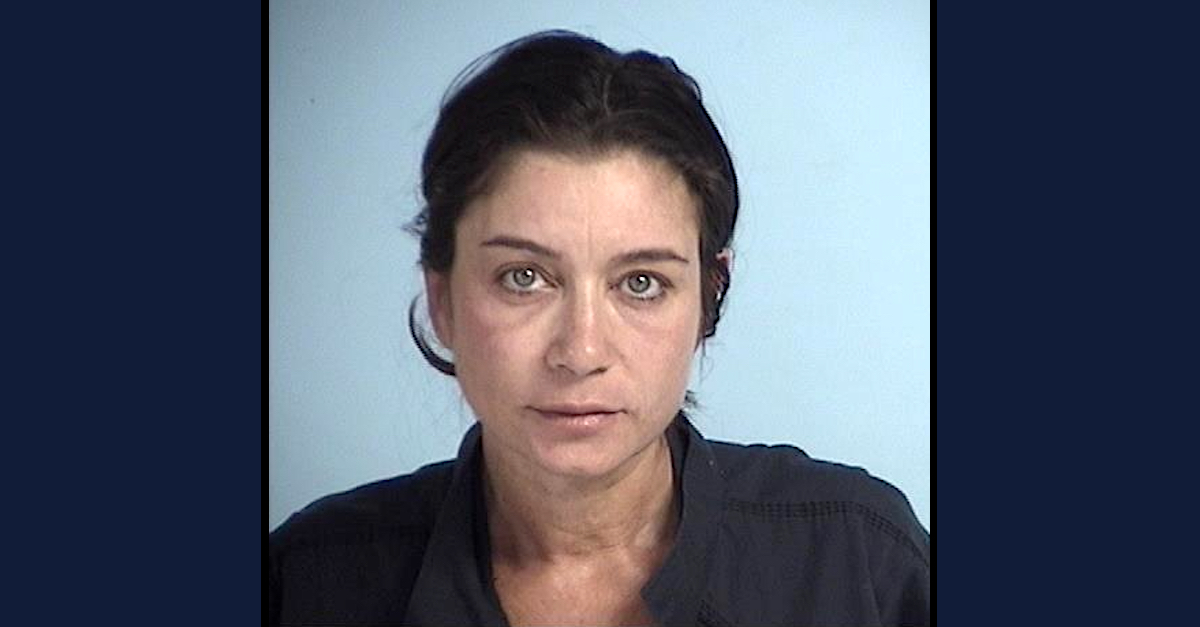 A woman whose now-viral altercation with an 80-year-old man on a Delta Air Lines flight — a portion of which involved a squabble about face masks — has had other run-ins with the law over the course of the past year, law enforcement records show.

Patricia Cornwall is now facing a federal assault charge for the incident on the Dec. 23 flight, according to federal court documents in the Northern District of Georgia.

During the flight in question, Cornwall, 51, was a passenger on the flight from Tampa to Atlanta and was allegedly returning to her seat after using the restroom. She found her path blocked by a flight attendant with a beverage cart. Cornwall asked the flight attendant for help getting back to her seat but was instructed to take an empty seat until the beverage service was complete.

“What am I, Rosa Parks?” Cornwall snapped at the flight attendant, according to papers filed by the FBI.

An 80-year-old man, identified in police reports as Russell Miller, then reportedly told her that she “isn’t black” and “this isn’t Alabama and this isn’t a bus.”

Things escalated from there, as captured in a fellow passenger’s cell phone video. Cornwall and Miller exchanged insults (he at one point admonishes her, “Sit down, Karen!”) as she berated him (“Put your fucking mask on!”) for not wearing his face mask. Miller repeatedly pointed out that he was eating and therefore did not have to have his mask on — not to mention that Cornwall’s own mask was down on her chin.

Cornwall can be seen in the video lunging at Miller, apparently striking him in the face and spitting on him.

“Now you’re going to jail!” he shouted at her. “That’s assault.”

The flight attendants used the beverage cart to force Cornwall further down the aisle of the plane and separate her from Miller. The defendant was detained, and the police were called to a report of a passenger acting disorderly and causing injury to passengers and flight crew.

Upon landing at Hartfield-Jackson International Airport in Atlanta, Atlanta Police Department officers were waiting at the gate and spoke to the flight attendants and other passengers who witnessed the incident. The APD officers detained Cornwall, contacted the on-call FBI agent, and took her to the local Atlanta police precinct where FBI agents responded and took her into their custody.

The police report included additional details about Cornwall’s alleged actions and injuries she caused. It says Miller was “punched in the face and scratched on his face eye area,” while another passenger was “burned by hot water because of [Cornwall’s] disruptive actions.” Additionally, the report says Cornwall attempted to kick a flight attendant who was attempting to restraining her during the outburst.

CNN reported that Cornwall made her initial appearance on federal court in Atlanta on Monday. She is facing a Class A misdemeanor charge of assault for allegedly “striking, beating, or wounding R.S.M. in the special aircraft jurisdiction of the United States,” according to the complaint.  (Miller was identified only as “R.S.M.” in the federal document.) Cornwall has been detained in federal custody since being arrested on Dec. 23 at the airport.

Cornwall did not have to enter a plea yet for this initial appearance. She faces up to one year in prison and up to a $100,000 fine.

Magistrate Judge Christopher Bly engaged in “extensive discussion” with Cornwall’s attorney, CNN said, regarding the terms of Cornwall’s release and how she might be permitted to travel back to her residence in Los Angeles.

In the end, Bly set Cornwall’s bond at $20,000 and granted her permission to take a flight back to Los Angeles (with an airline other than Delta). Other than that trip home, the defendant is prohibited from traveling by any other interstate commercial carrier (plane, train, or bus) while she is out on bail.

The viral nature of the video from the flight set internet sleuths on Cornwall’s trail, and she was quickly identified as a former Playboy model, NFL cheerleader, and actress. Working under the stage name “Patty Breton,” Cornwall appeared on a 1989 episode of Baywatch, had a minor role on Married… With Children in 1987, and was featured in Playboy: Cheerleaders in 1997.

During the early 1990s, she was a member of the Raiderettes, the cheerleading squad for the Raiders; at the time, the NFL team was based in Los Angeles.

According to CNN, Delta spokesperson Grant Myatt confirmed that Flight 2790 was “met by law enforcement after an unruly customer disturbance during flight.”

“Situations like these are rare for the vast majority of our customers and Delta has zero tolerance for unruly behavior at our airports and aboard our aircraft,” said Myatt.

Cornwall started the year already in legal trouble stemming from a Dec. 11, 2020 arrest in Los Angeles for DUI. According to the New York Post, she pleaded no contest to having a blood alcohol level of 0.08 or higher. She was sentenced in May of this year to 36 months of probation. She was also ordered to complete 100 hours of community service and a three-month alcohol and drug education counseling program for first offenders.

That educational program apparently didn’t sink in. Cornwall was arrested again for DUI, this time at 3:18 a.m. on Nov. 10 in Walton County, Fla. She was booked into the local county jail and released the following day on $1,000 cash bond. Court records show she was charged with driving under the influence, careless driving, and failure to carry/exhibit on demand her driver’s license. She filed a notice of criminal indigent status and Justin Thomas Turner with the public defender’s office was appointed to represent her. Cornwall entered a written plea of not guilty on Dec. 2, and her next court date is in January.

A TMZ report on the incident adds even more colorful details:  the arrest occurred after Cornwall allegedly crashed her gray Nissan into a tree in Santa Rosa Beach and tried to attack first responders. When a tow truck driver arrived at the accident scene and attempted to provide assistance, he reportedly found Cornwall in the driver’s seat while unsuccessfully attempting to put the car in reverse and remove it from a tree.

The tow truck driver called the police, saying that he noticed an odor of alcohol on Cornwall’s breath. Florida Highway Patrol officers arrived to find Cornwall still in the vehicle. She refused to get out or provide her name. The arrest report described Cornwall as having a “flushed” face, slurring her speech, being “belligerent,” and attempting to “fight” the police officers.  The authorities on the scene detained her “for her safety and ours.” Cornwall failed a field sobriety test and refused to take a breathalyzer.

There was also an order of protection entered against Cornwall in January of this year after her sister-in-law, Monica Cummings, filed for domestic violence protection from the courts. In legal documents, Cummings alleged that Cornwall had a “history of violent outbursts and destructive and erratic behavior” and had allegedly left her voice messages threatening to kill her.

Read the charging document in the case connected to the Delta flight below: