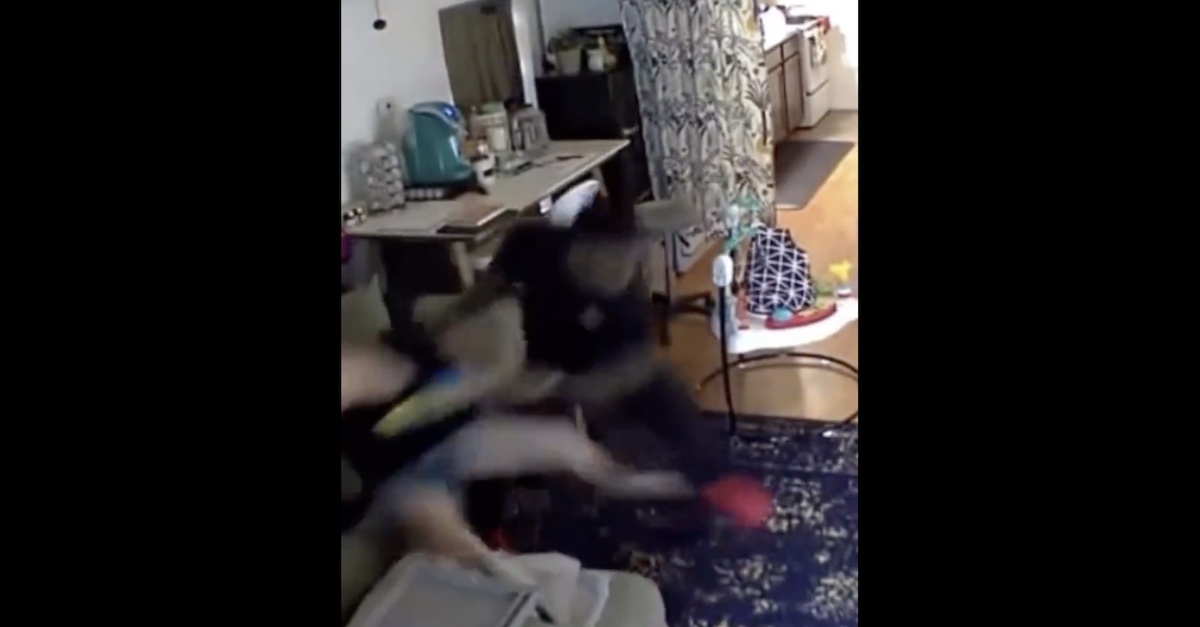 Former NFL running back Zac Stacy was identified as the man who was caught on camera in a shockingly graphic video brutally abusing the mother of his young child–and right in front of the child at that.

In the clip, Stacy walks toward his ex-girlfriend while she is helpless on her couch. The woman’s hands are raised in a defense-like posture as her assailant reaches forward and picks her up by her midsection with both hands. In one motion, he flings the woman across the room like a ragdoll and sends her crashing, hard and with extreme force into the opposite wall–knocking over a flatscreen television set, which then falls onto the left side of her body.

The woman’s right makes contact with an unoccupied baby bouncer, which jostles a bit as Stacy turns his back and walks away.

The sound of the former couple’s 5-month-old son crying is audible, just briefly, as the ex-football player quickly swivels his head back around and shoots his victim a presumably menacing glance.

A frightened cat scurries back and forth across the room a couples times to avoid the violence as the woman pleads for her abuser to listen.

“It wasn’t,” she continues, attempting to explain something before being cut off.

Cross-talk occurs and the conversation is hard to make out for a couple seconds.

“Listen!” she says again as Stacy moves towards her. “Please!”

“You think that was okay?” he asks again.

During that dialogue, the former St. Louis Rams and New York Jets player uses his hands to grab and unwrap part of the blanket covering the infant before rushing back to the woman, kicking the baby bouncer and then towering over her as she cries out, “please” repeatedly.

“You thought that was okay?” he says again. “And then you’re gonna ruin relationships and talk about I’m destructive?”

Stacy then immediately rears back and appears to slap or punch her in the face.

“Fucking bitch,” he says, picking the mother of his child off the floor by her shirt before the footage cuts away to another angle and earlier time period where Stacy appears to directly punch the woman in the head twice before the initial throw into the television set.

Obtained by TMZ Sports, the incident contained on the video reportedly occurred at the woman’s Florida home over the weekend.

The outlet reports that the woman, who is not being named, “filed for a restraining order Monday — for her and her son.”

A copy of that order was also cited by TMZ Sports.

“He punched me several times in the head,” she wrote. “I begged him to stop because the baby was on the couch just a few feet from where he punched me. He then picked me up and threw me into my TV. The TV began to fall and he turned to make sure I wasn’t getting up. As I laid on the floor he began to yell at me, telling me I’m destructive. He then picked me up off the floor and off my feet and body slammed me into our son’s bouncy seat.”

“I fear for my life and my children’s lives,” the restraining order application continues–noting that she was hospitalized following the abuse.

The woman said she called police after the attack but by the time law enforcement arrived, Stacy was long gone.

Reaction to the video was furious.

I’m not retweeting the video but ZAC STACY NEED TO BE THROWN UNDER THE JAIL. Any man that puts his hands on a woman is a coward. Can’t believe what I just saw.