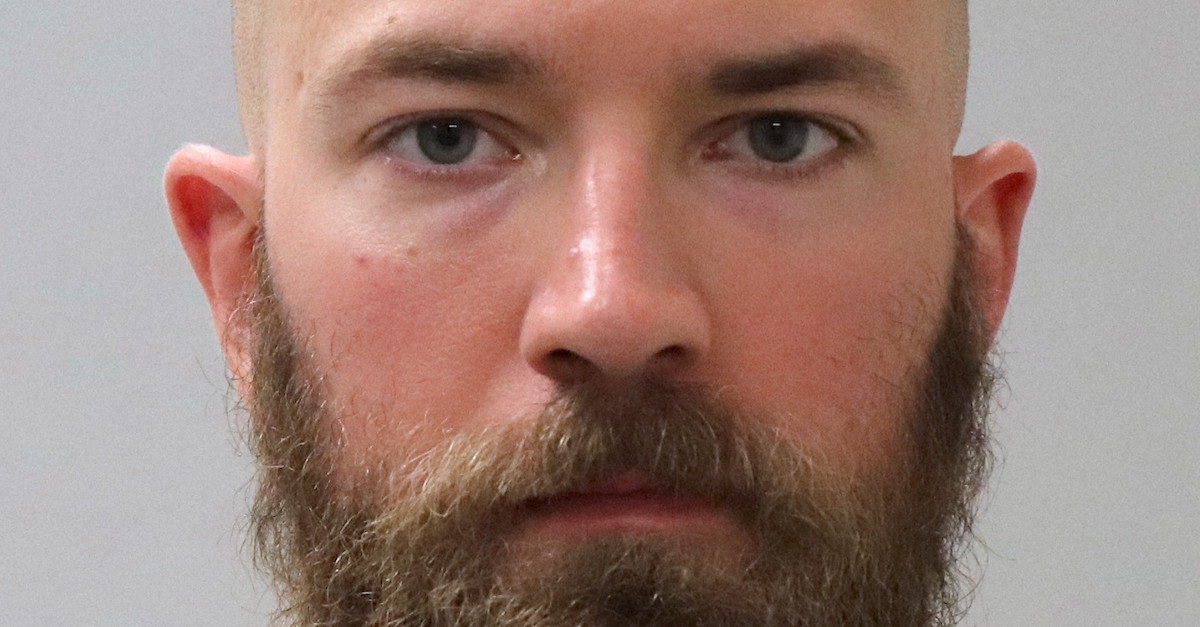 William Darby appears in a post-sentencing mugshot taken by the Madison County, Ala. Sheriff’s Department.

Body camera footage has been released in the shooting death of Jeffery Parker by a now-convicted Huntsville, Ala. police officer.

Parker, 49, was suicidal and was holding a gun to his own head when police were called to intervene in April 2018. William Darby, the officer who pulled the trigger, pulled up to the scene, pulled a rifle from his squad car, ran to the home where Parker was sitting, and fired a fatal bullet approximately one minute after he exited his cruiser.

Two other officers were already on scene. Darby pushed past both of them before firing his weapon. 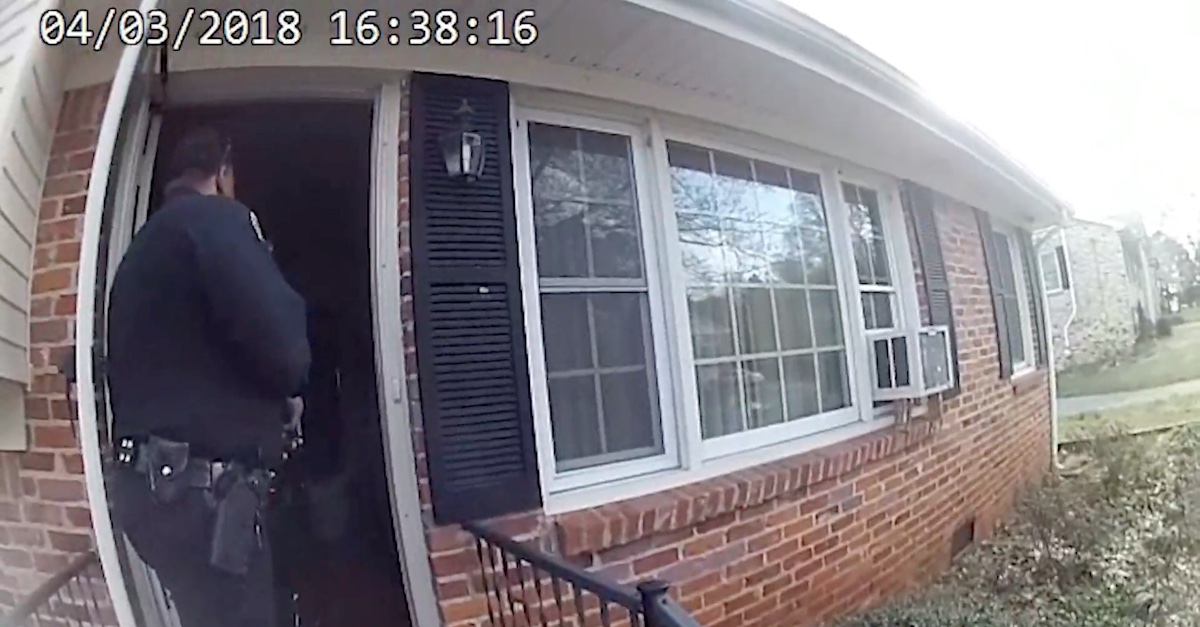 This screengrab from William Darby’s body camera video shows his view as he arrived at Jeffrey Parker’s home.

Darby was sentenced on Aug. 20th to 25 years in prison for murdering Parker. Darby touted his Christian faith before learning his fate. A judge previously agreed to release Darby on bond after conviction but before sentencing.

The video and audio shows Darby arriving at the scene, cussing in his cruiser, pulling his rifle, and jogging to Parker’s home. When he arrived at Parker’s doorstep, Darby, who is white, quickly pushed past two other officers who both appear to be people of color after attempting to tell them how to manage the situation.

The two other authorities at the scene were identified at Darby’s trial as officer Genisha Pegues and officer Justin Beckles. Pegues was reportedly the “senior officer” on the scene, but all three police personnel present appear to have held the same rank as Darby.

Pegues testified at Darby’s trial that she was trying to talk Parker out of harming himself.  She said her gun was drawn but was “not pointed at Parker” through most of the incident. 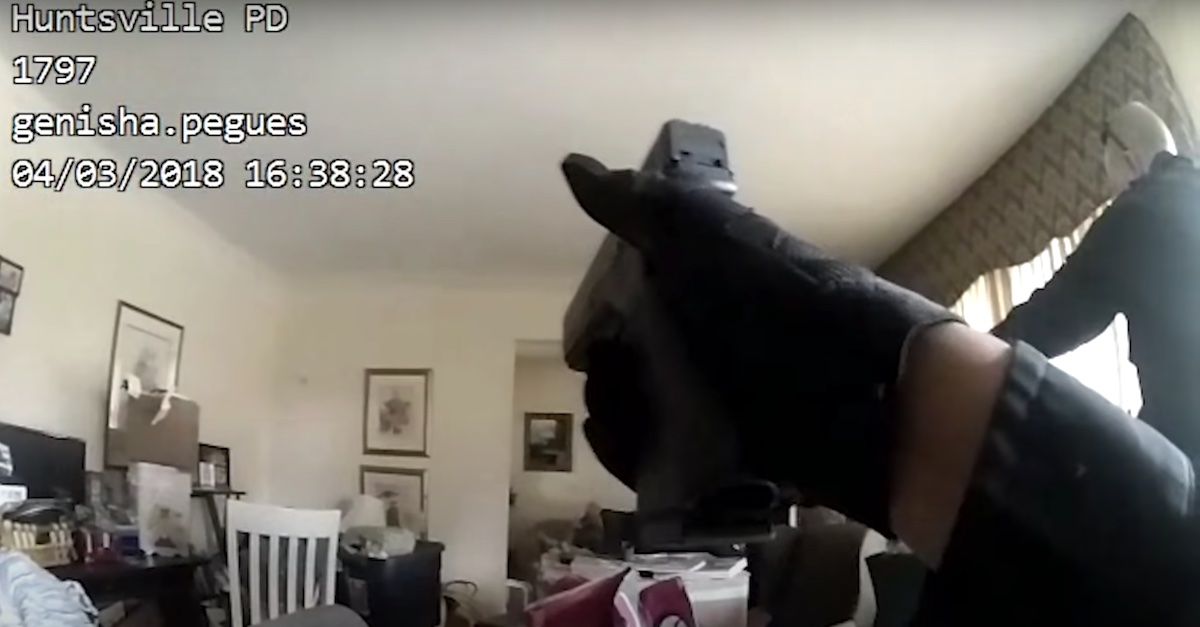 An image from a body camera worn by officer Genisha Pegues shows her pistol drawn and pointed generally in the direction of police shooting victim Jeffrey Parker. Officer William Darby, the only officer who fired a bullet, is at right — just seconds before he fired.

The video backs up her testimony.

“Hey, what’s your name?” Pegues asked Parker. “Why you want to take your life, man? Huh? Strung out on drugs?”

Pegues asked if anyone else was in the house. The reply was difficult to ascertain, but Pegues repeated that a woman was apparently “upstairs.” Pegues then asked the name of the woman; it was also inaudible.

“What’s going on today that you want to take your life?” Pegues asked Parker.

Darby arrived separately from the other two officers.

“Point your fucking gun at him,” Darby told Pegues when he showed up.

“Put the gun down!” Darby yelled toward Parker from the suicidal man’s doorstep.

“He has it to his head,” Pegues said to Darby with reference to Parker and the pistol the suicidal man was holding.

“I don’t want anything to happen to you right now,” Pegues said to Parker. “I don’t.”

“He can shoot you,” Darby said to Pegues.

“Listen. He’s right here in front of me,” Pegues said to Darby.

“Put the gun down,” Darby told Parker as he crossed the threshold into the suicidal man’s home and pointed his rifle at the man’s head. “Put the gun down!” he again yelled. 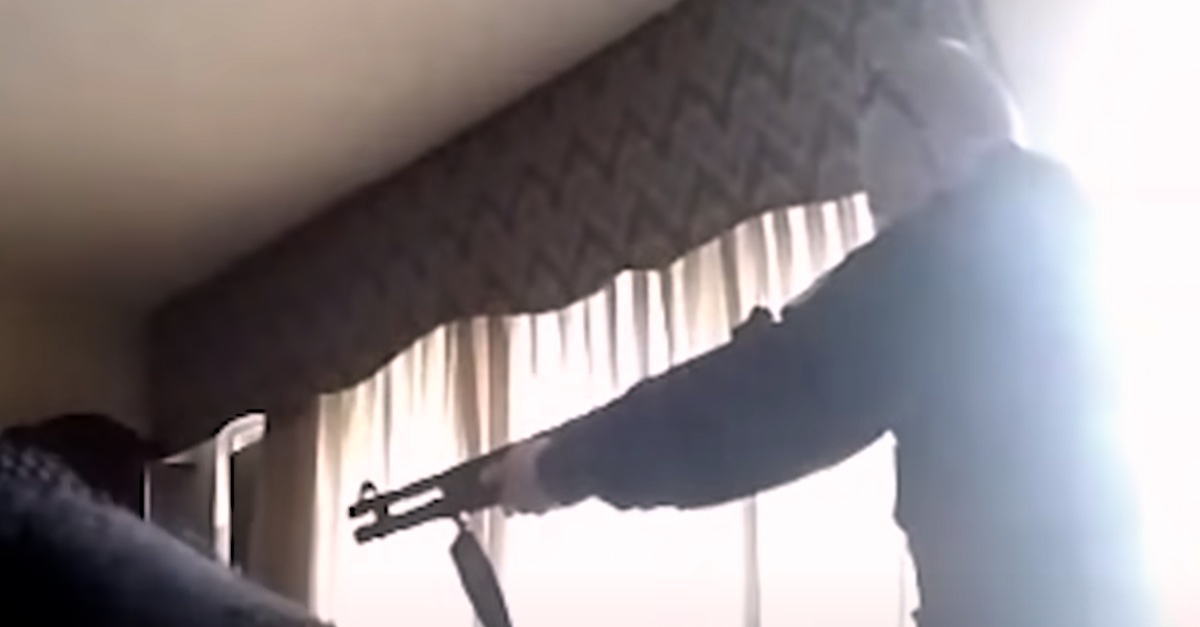 “Hey, brother. Put it down, bro! Put the gun down!” Beckles said.

“Put it down; I’m not going to tell you again!” Darby yelled.

“We don’t want you to take your life. Please, please! Lower the gun right — ” Pegues pleaded. 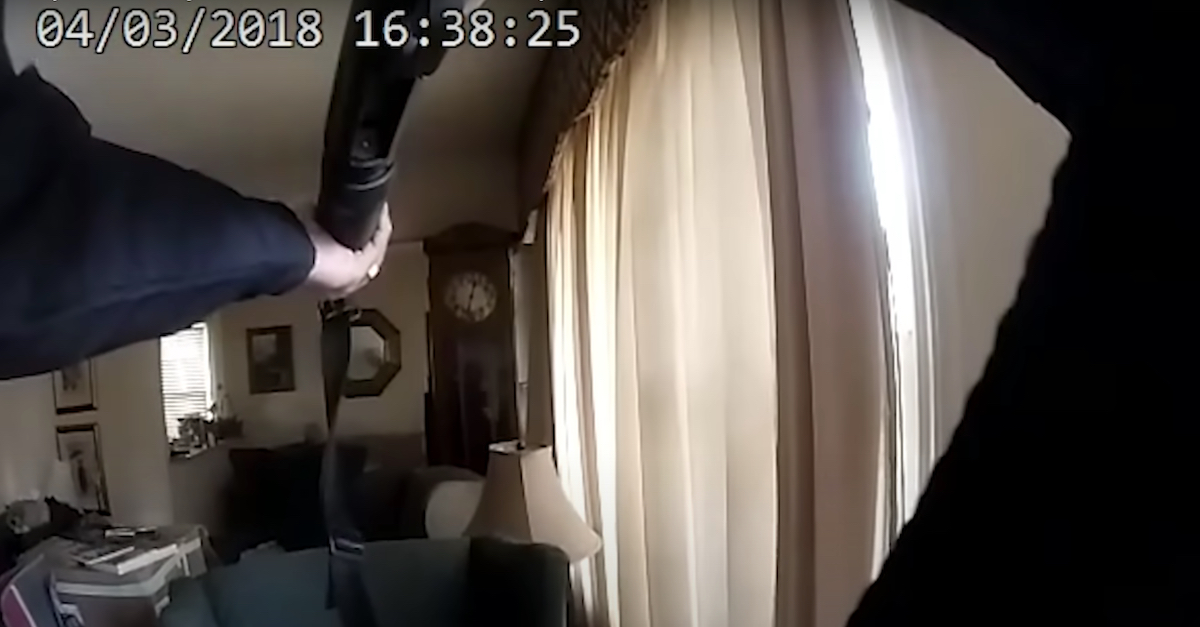 William Darby’s body camera footage shows what he saw split seconds before he fired his rifle and killed Jeffrey Parker.

Darby approached Parker, took the pistol from the victim’s lifeless hands, and placed the victim in handcuffs.

A sobbing woman — presumably the woman who was said to have been upstairs — could be heard asking officers what happened.

Darby claimed at trial that he fired when he saw Parker start to move his gun. Pegues testified that she had the situation under control without Darby’s decision to escalate the matter.

Darby pulled the trigger about 10 seconds after he entered Parker’s home.

The mayor and the chief of police publicly slammed the jury’s unanimous decision to convict Darby shortly after the verdict. Darby’s lawyers have indicated they plan to swiftly appeal the conviction.

Darby is currently in custody at the Madison County Jail in Huntsville, according to an Alabama Department of Corrections website. His release date is scheduled for Aug. 17, 2046.

Body camera angles from all three officers are embedded in the player below and are presented in the following order: Beckles, Darby, and Pegues. The video was edited by statewide newspaper consortium AL.com.

[Mugshot of Darby via the Madison County, Ala. Sheriff’s Office. All other images via body camera video.]