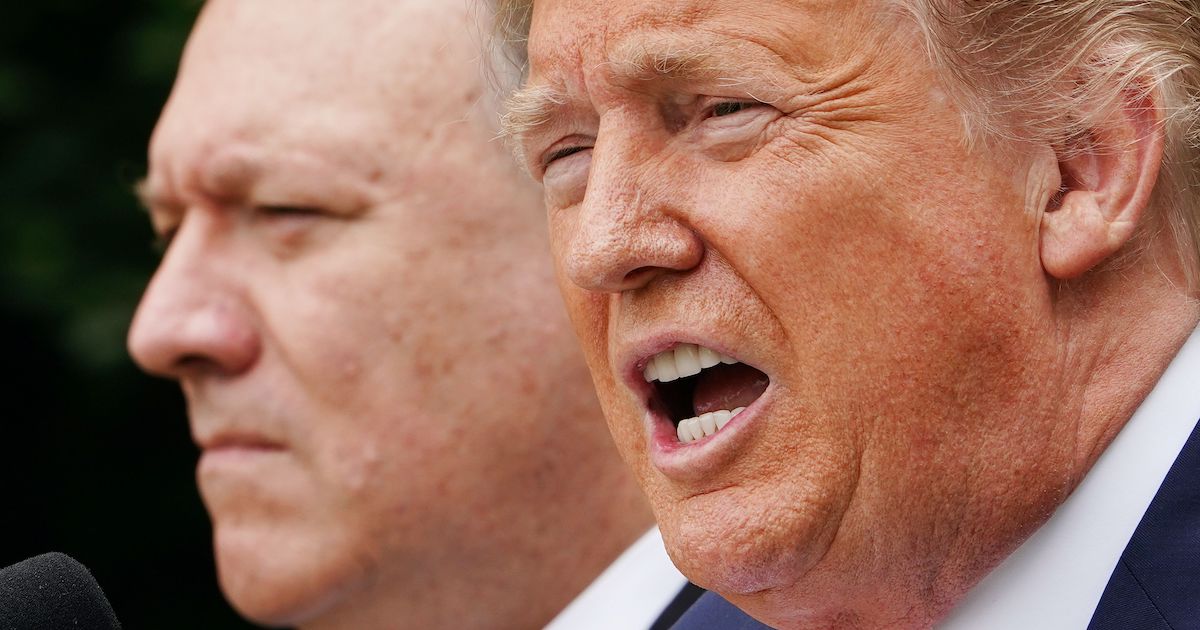 The State Department decided that Finnish journalist Jessikka Aro would not receive the International Women of Courage (IWOC) award because her negative retweets about President Donald Trump were “not suitable,” were “out of place,” and were likely to cause “blowback” against Secretary of State Mike Pompeo and First Lady Melania Trump on the world stage. Then the Trump administration lied to the public about why it made this decision, the State Department’s Office of Inspector General confirmed in a report on its findings.

The section on the State Department’s internal considerations on the rescission of the award (the award was ultimately given to someone else) shows that a Senior Advisor literally said “yikes” when learning of tweets about Trump and Russian President Vladimir Putin, among others:

On February 8, 2019, S/GWI requested the social media handles of all the selected awardees. After receiving them, S/GWI assigned interns to review the various social media accounts. During this process, S/GWI discovered dozens of Twitter and Facebook posts by Ms. Aro that it considered controversial, some of which were critical of the current President. For example, one of the tweets that S/GWI flagged was a September 1, 2018, retweet of an NBC news report describing threats against the Boston Globe. Ms. Aro added the comment, “Trump constantly labels journalists as ‘enemy’ and ‘fake news.’ One Trump supporter made threatening calls to Boston Globe reporters and said he was shooting them in the head because they are ‘enemies of the people’ and ‘fake news.’ A search of the house found weapons and ammunition.” S/GWI also flagged a tweet dated June 28, 2018, in which Ms. Aro wrote, “Russian troll factory organized pro-Trump protests in US soil. In July Trump and Putin will meet in Helsinki, Finland, and Finnish people can protest them both. Sweet.”

On February 14, 2019, an S/GWI staff member emailed an EUR official and stated that it was “urgent that we find time today” to discuss the “2019 IWOC Awardee from Finland.” The staff member also forwarded this email to a Senior Advisor in the Office of the Under Secretary for Civilian Security, Democracy, and Human Rights (J), noting that they had “something to address regarding the 2019 IWOC Awardee from Finland.” The Acting Director, who was copied on this email, then replied and attached the package of materials containing Ms. Aro’s posts. The Acting Director wrote, “I am very concerned over her retweets that may cause blowback. She is not suitable.” The Senior Advisor responded, “Yikes. These are out of place.”

The OIG report provided a window into how the Trump administration makes decisions based on what is either fear or anticipation of negative media attention—particularly when the targets of that embarrassment are the First Lady and Secretary Mike Pompeo:

On February 15, 2019, S/GWI staff held a call with both EUR and Embassy Helsinki officials. Ambassador Pence also joined the call from Washington, although it was unclear how he learned of the call or the underlying issue. The DCM did not participate in the call. According to meeting notes provided by Embassy Helsinki, the Acting Director argued that Embassy Helsinki should not move forward with presenting an IWOC Award to Ms. Aro, citing concerns that Ms. Aro could potentially use the ceremony’s platform to make “a political statement.” These notes also reflect the Acting Director’s concerns that “the media could highlight the tweets and Facebook posts during the ceremony,” causing potential embarrassment to the Department, particularly given the involvement of the Secretary and the First Lady. The Acting Director told OIG that her primary worry was that Ms. Aro would be on the stage with the First Lady, the wife of the person about whom Ms. Aro had made negative comments. The Acting Director also said that other senior Department officials shared this concern, although she did not specifically identify any individuals other than the J Senior Advisor and Ambassador Pence. In contrast, officials at Embassy Helsinki who were involved in this process told OIG that they did not consider the posts to be problematic. Instead, they noted that some of the social media posts at issue appeared to be the result of poor internet translations or were “reposts” of content generated by internet “trolls” in an effort to smear Ms. Aro. To the extent the posts were correctly attributable to her, some viewed them as “legitimate political speech.”

The concern with the nominee is not her political points of view (that was evident from her nomination cable), and we are not concerned about what she may say in DC. The issue is her past tweets and retweets that could potentially be highlighted and flashing across tv screens. It may negatively impact the awards, take away the attention from the other 9 courageous women, and cause embarrassment[.] This will be a huge risk for the DOS to take and put her on the same stage as the Secretary and the FLOTUS.

The OIG said that the State Department then lied to the public about what happened here. Employees within the Secretary’s Office of Global Women’s Issues (S/GWI) told both the public and Congress that Aro’s social media posts were not factors in decision-making surrounding the award. Talking points said that there were simply more qualified women than Aro:

A nominee made it to semi-finalist consideration by the Department of State for this competitive, high-profile award. While the nominee’s credentials are impressive, the nominee was not selected to receive an award due to the extremely high caliber of this year’s nominations.

But the story was actually as simple as it appeared to be: Aro was told she would receive an award; the award was rescinded when her negative tweets about Trump were discovered; the decision was made in no small part to prevent negative media attention and embarrassment—particularly for FLOTUS and Secretary Pompeo—on a global stage; the State Department lied when it said Aro was erroneously told she would receive an award and that her anti-Trump social media posts didn’t factor in.

“Because decisions as to IWOC awardees are solely within the Department’s discretion, the decision to rescind Ms. Aro’s award appears to have been an authorized exercise of the Department’s broad discretion to select awardees,” the conclusion read. “OIG found, however, that Department officials made subsequent statements to the public and to congressional staff that inaccurately asserted that Ms. Aro was erroneously notified that she had been selected for the award and that factors other than Ms. Aro’s social media posts formed the basis of the decision not to give her the IWOC Award.”