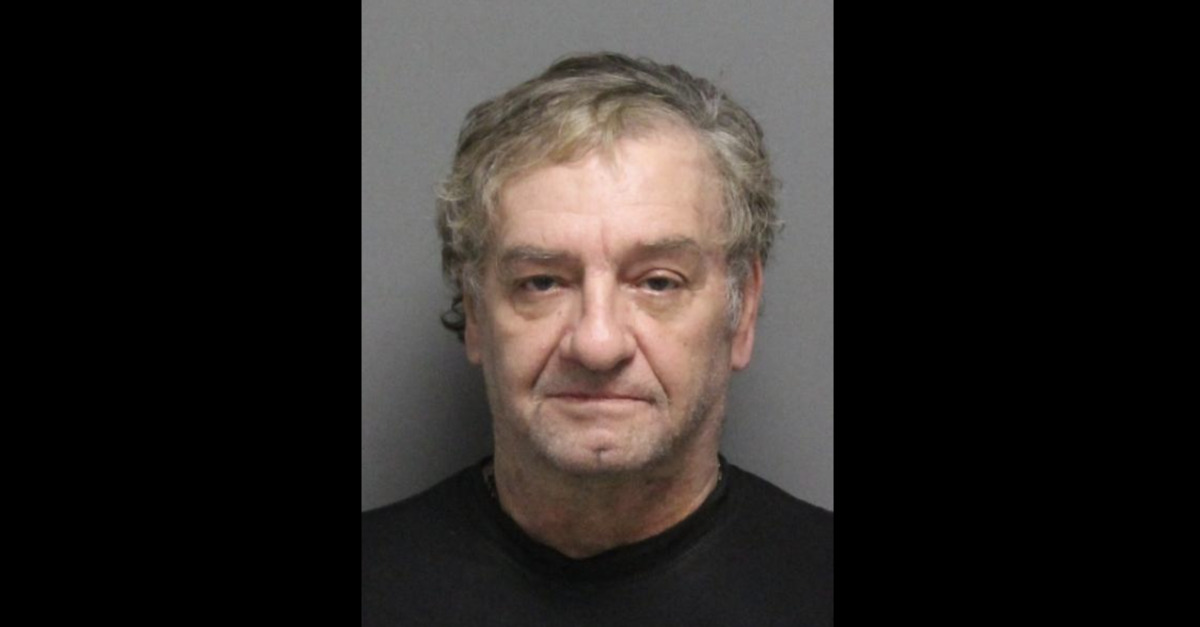 A QAnon influencer who accuses Democratic Party politicians of being pedophiles has been identified in two reports as a registered child sex offender. David Todeschini, 70, goes by the name of “David Trent” online where his thousands of fans listen to him opine on any number of conspiracy theories related to the broader QAnon movement.

“Why this country hasn’t risen up and hung these bastards by now is beyond me,” Todeschini said in a September video complaining about federal vaccine mandates. “These treasonous rat bastards need to be taken out of Washington, D.C. I say get all the children out and nuke it.”

According to RightWingWatch, a project of People for the American Way, the title of that video describes President Joe Biden as a “Cho-mo,” which, the outlet says, is “prison slang for a pedophile.” RightWingWatch first reported that David Todeschini was the real name behind the pseudonym David Trent.

According to VICE News, Todeschini also subscribes to the so-called “frazzledrip” conspiracy theory, a particularly violent piece of political fan-fiction assumed to be real by adherents which alleges that former presidential candidate Hillary Clinton has been captured on video sexually abusing and torturing a young girl with a trusted longtime aide before using the child’s blood in a ritualistic fashion.

“This is proven beyond a reasonable doubt and to a moral certainty with physical, undeniable, irrefutable evidence,” he told the outlet, failing to provide any such evidence or proof.

There is, however, a public record of one David Todeschini’s own child abuse.

On May 19, 1999, the QAnon adherent and influencer was convicted of one count each of sexual abuse in the first degree and sodomy in the second degree for coercing an 8-year-old boy into sexual activity in 1996. He was given a sentence of 28 months to seven years in state prison. The convicted child molester ultimately served a five-year sentence. Todeschini had no known prior relationship with his victim.

According to the New York State Division of Criminal Justice Services, the conspiracy theorist is considered a Level 3 threat, which is defined as a “high risk of repeat offense and a threat to public safety.”

He is also considered to a be a “Sexually Violent Offender” in New York.

The website also offers details of his conviction and the sexual assault thats he committed against the child on Aug. 10, 1996:

Todeschini reportedly confirmed his alias in an interview with VICE and told the outlet that he planned to sue RightWingWatch for their original story—but did not cite an inaccuracy when asked to do so. Per VICE:

Todeschini confirmed that he used the alias David Trent in a phone interview with VICE News on Thursday morning.

Todeschini said he was planning on suing Right Wing Watch for publishing the investigation, but when asked what was inaccurate about the account, he failed to respond.

Kristen Doerer, the author of the original story and managing editor for RightWingWatch, recently retweeted VICE’s story about Todeschini, highlighting his litigation threat:

“Todeschini said that he was planning on suing Right Wing Watch for publishing the investigation, but when asked what was inaccurate about the account, he failed to respond.”https://t.co/aIGhqLTDHN

Todeschini can easily be identified as his alias with a quick visual comparison of “David Trent” on the “Inglorious Patriots” BitChute program to Todeschini’s 2019 mugshot from the New York sex offender registry and his 2020 mugshot from the North Carolina sex offender registry. Todeschini’s alias is hardly hidden—RWW was able to cross-reference multiple social media accounts to determine they are operated by the same person. Numerous aspects of Todeschini’s LinkedIn page match his Facebook page, which he operates under the Trent alias, including claiming to have worked for IBM and served in the U.S. Air Force, his love for his Jeep Wrangler, and having studied at RCA Institutes. His LinkedIn page also advertises his Net4Truth website. The ’97 Jeep Wrangler description on his LinkedIn page matches the vehicle description provided on the New York sex offender registry, and his BitChute channel also advertises his Facebook page. On numerous social media pages, he touts being a Vietnam war veteran.

Todeschini is not currently under community supervision in New York State, but officials there said that aliases are supposed to be registered with the sex offender registry. He currently lives in North Carolina where he is a property manager in addition to his conspiracy theory-focused content creation activities.

Todeschini reportedly cast himself as a victim of the “deep state” who did what former Trump National Security Advisor Michael Flynn did, telling VICE he “pled guilty to a crime that he didn’t commit.”