Hours after we learned that Rep. Matt Gaetz (R-Fla.) had lawyered up amid a widening Department of Justice investigation into sex trafficking (among other matters), the House Ethics Committee announced an investigation of its own on Friday into the various allegations about Gaetz’s conduct that have made headlines over the last days and weeks.

“The Committee is aware of public allegations that Representative Matt Gaetz may have engaged in sexual misconduct and/or illicit drug use, shared inappropriate images or videos on the House floor, misused state identification records, converted campaign funds to personal use, and/or accepted a bribe, improper gratuity, or impermissible gift, in violation of House Rules, laws, or other standards of conduct,” the statement from Committee Chairman Rep. Ted Deutch (D-Fla.) and Ranking Member Rep. Jackie Walorski (R-Ind.) began. “The Committee, pursuant to Committee Rule 18(a), has begun an investigation and will gather additional information regarding the allegations.” 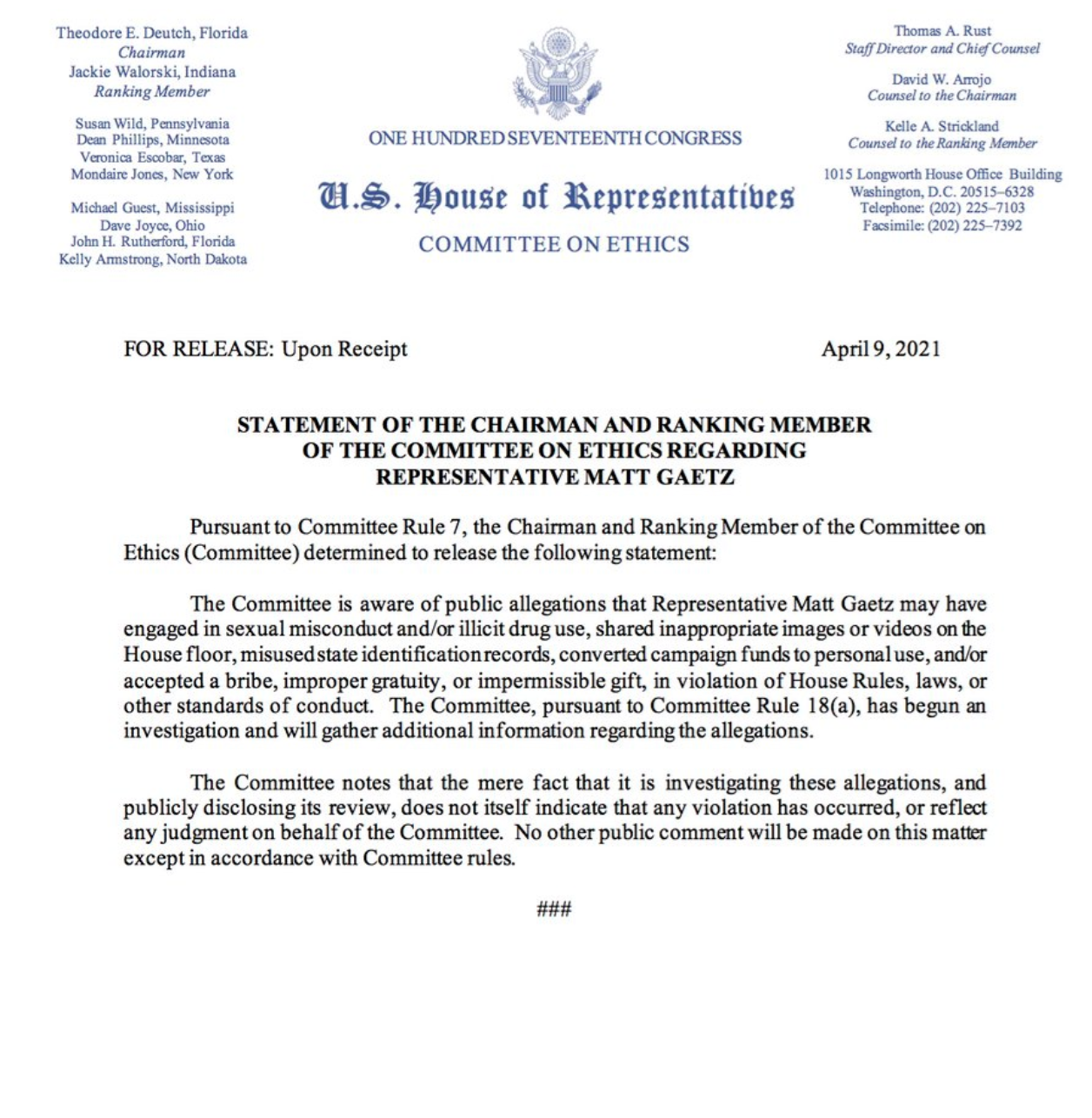 The announcement of the investigation comes the day after Gaetz’s indicted associate Joel Greenberg, a former Florida tax collector, and prosecutors officially expressed a willingness to resolve Greenberg’s criminal case with a plea deal. Greenberg’s defense lawyer Fritz Scheller made waves when answering the questions of the press outside of court. After being peppered with several questions, Scheller said: “I’m sure Matt Gaetz is not feeling very comfortable today. Alright?”

“Should a change of plea not occur, the parties agree to a July 2021 trial,” the document added.

This is not the first time that the House Ethics Committee has investigated Rep. Gaetz. The previous investigation focused on whether he committed witness tampering or obstruction on the eve of Michael Cohen’s congressional testimony against Donald Trump, Cohen’s former boss.

“Hey @MichaelCohen212 – Do your wife & father-in-law know about your girlfriends? Maybe tonight would be a good time for that chat. I wonder if she’ll remain faithful when you’re in prison. She’s about to learn a lot,” Gaetz tweeted (and deleted) on February 26, 2019.

Gaetz has denied wrongdoing, denied seeking a pardon from Trump, claimed he is the victim of an extortion plot, and blamed Attorney General Merrick Garland for an investigation that began when Bill Barr served in that role. Gaetz said he has never paid for sex and he claimed that the last time he had a sexual relationship with a 17-year-old was when he was 17. He has also set his Venmo transaction history to private.

Rep. Gaetz has also added high-powered defense attorneys Marc Mukasey and Isabelle Kirshner to his legal team. The Logan Circle Group, a PR firm working on Gaetz’s behalf, said in a statement earlier in the day that Gaetz is “going to fight back against the unfounded allegations against him. His legal team, led by Marc Mukasey and Isabelle Kirshner, will take the fight to those trying to smear his name with falsehoods.”