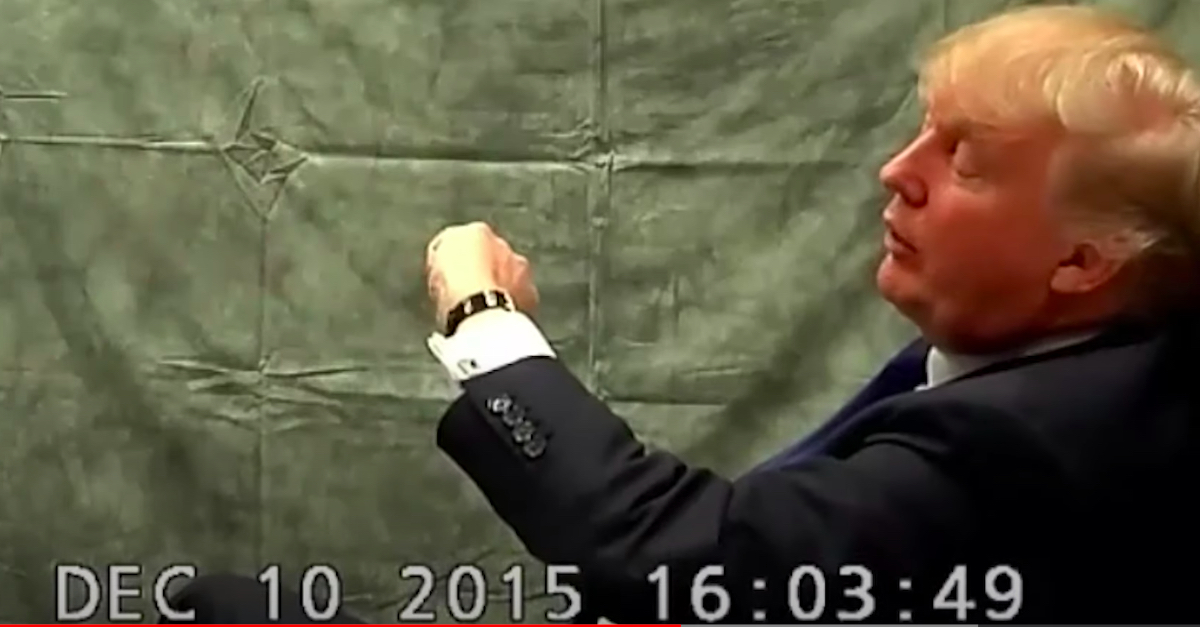 A hot-mic video of Donald Trump from late 2015 shows the then-GOP presidential candidate privately boasting about pressuring the Better Business Bureau (BBB) to change the rating given to his embattled Trump University business venture. It also shows him complaining about a “Spanish” judge he later called a “Mexican.”

The video, obtained and released by Mother Jones on Thursday, stemmed from a December 2015 taped deposition in a lawsuit filed by former Trump University students alleging they had been defrauded by Trump’s false promises regarding the real estate seminar. While Trump repeatedly insisted throughout his 2016 campaign that he did nothing wrong and vowed never to settle the lawsuit, he agreed to pay the plaintiffs $25 million settlement over the “sham” university.

During a break in the deposition, which took place in a conference room in Trump Tower, Trump and his attorney Daniel Petrocelli were left in the room alone, with both men apparently unaware that the camera was still rolling.

Referring to the BBB, a non-profit group that gives businesses a letter grade from A-F, Trump noted that the organization had given Trump University a “D” rating, telling Petrocelli, “that’s a kill for you.” Then Trump described how his “guy upstairs,” who he described as an “Alan Garten type,” had phoned the BBB and said, “We’re going to sue you – [unintelligible] – an ‘A,’ and got the ‘D’ removed.” The University shut down in 2010.

During a televised presidential debate a few months later, Trump made several claims about Trump University’s rating with the BBB that were soon shown to be demonstrably false.

The video also shows Trump talking about U.S. District Judge Gonzalo Curiel, a Barack Obama appointee who was presiding over the case.

“Is he an asshole or does he just want me in his courtroom?” Trump asked Petrocelli. “He’s an average judge,” Petrocelli responded, adding, “He’s not nuts. He’s from the wrong side of the aisle, too. That’s not helping.”

Trump then asked, “What about the Spanish thing?”

A little more than a year later, newly-elected President Trump attacked the Indiana-born Curiel – who was presiding over an immigration lawsuit against Trump – as being “a Mexican.”

In a 2017 interview, Trump described Curiel as being “extremely hostile” toward him because of his stance on immigration.

After being criticized for his comments, Trump doubled-down a few months later saying of Curiel, “He’s a Mexican. We’re building a wall between here and Mexico.”

The tape was given to Mother Jones by Art Cohen, one of the lead plaintiffs in the Trump University lawsuit. David Corn, who obtained the video, said Trump lawyers demanded that the video be destroyed.

EXCLUSIVE: @realDonaldTrump and his lawyers really don’t want you to see this hot-mic video of him I obtained. So much so they demanded we destroy the video. Here it is. https://t.co/Ir6dii4cLf