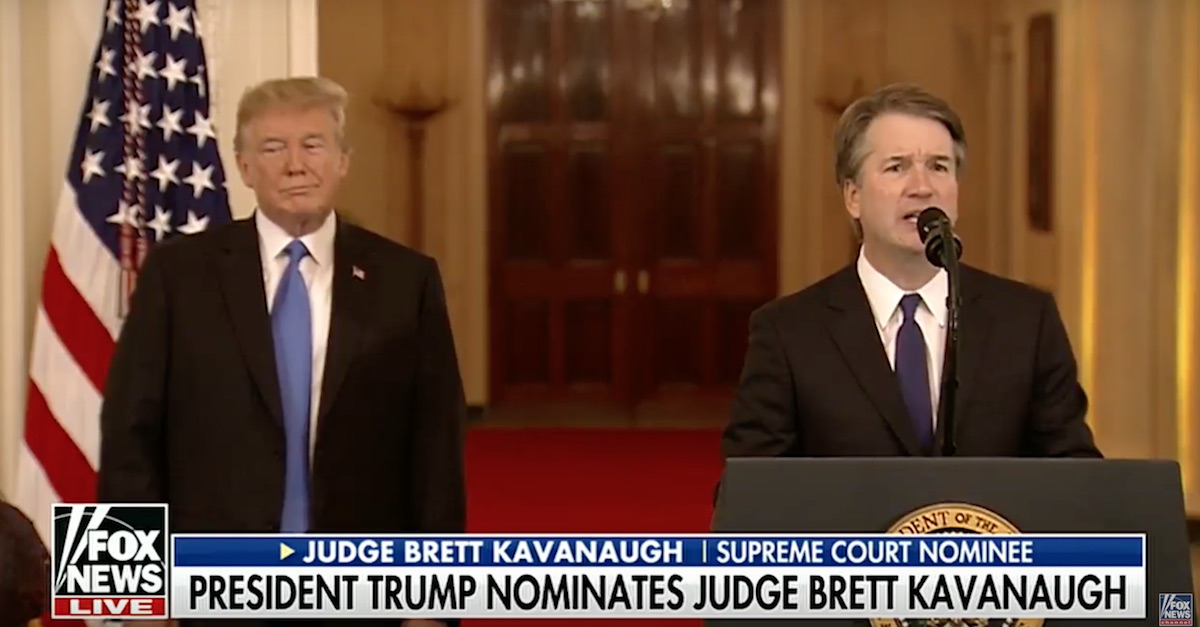 Fox News is a professional media outlet with a fairly massive reach. But even the pros get a little trolled sometimes.

This account, @_brettkavanaugh, has since been suspended by Twitter support–and after Law&Crime‘s article was published, Fox deleted their tweets referring to said account. The account didn’t tweet much (about five times total) before being suspended and some of the tweets were fairly anodyne; but there were plenty of clues that Kavanaugh wasn’t actually the person behind the digital Twitter mask.

For one, the account’s timeline history only went back to around 9 p.m. on Monday night–almost the exact time President Donald Trump made the Kavanaugh selection announcement on live TV.

The first post on the account’s timeline (no longer extant but a retweet survives here) was a copied-and-pasted recitation of Kavanaugh’s odd initial statement upon receiving President Trump’s rose:

I am grateful to President Trump and I am humbled by his confidence in me. Thank you President. No president has ever consulted more widely or talked with more people from more backgrounds to seek input about a Supreme Court nomination. #SCOTUS

Keep on barking. Teefa will be a smash hit. And Meesha will lose court case. I wonder what you are going to tweet after these 2 scenario? Poor girl😂😂 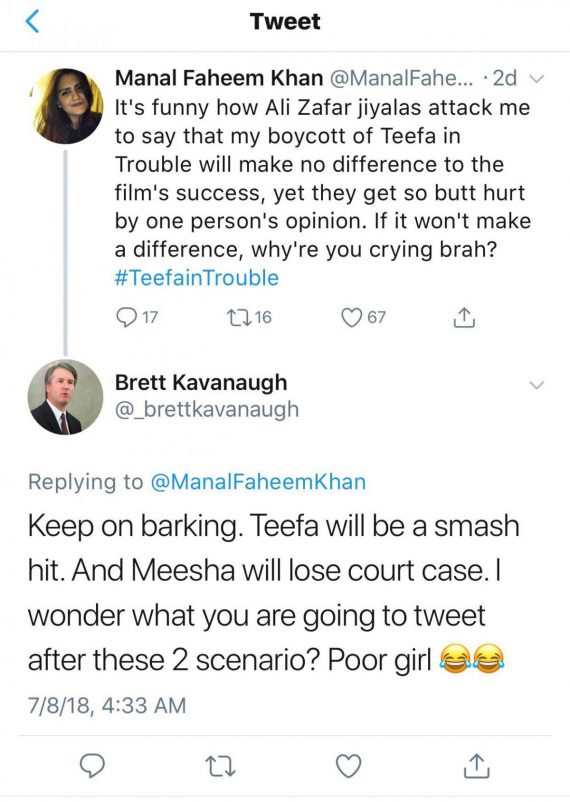 One of the last tweets posted by the since-suspended account was a recycled version of another actual statement from Monday night’s ceremony, “Tomorrow I begin meeting with members of the Senate. I will tell each senator I revere the Constitution. If confirmed by the senate I will keep an open mind in every case.” The use of this statement obviously confused many Twitter users–and apparently some in the media.

But one particular tweet from the account–this one easily visible on the timeline–should have put any journalist on red alert as to @_brettkavanaugh’s authenticity (or lack thereof). This tweet was culled straight from the ultra-current culture wars of civility and protest that have erupted in the wake of President Trump taking office:

Another tweet–which was quickly deleted and noted by Twitter user @Irma_Squirrel–should have made the account’s falsity fairly obvious due to its off-beat syntax and spelling errors. Yet another tweet–also quickly deleted–somewhat implausibly offered a Twitter poll asking users if they were “happy” about Kavanaugh’s nomination; this one prompted a direct reply to Fox’s Twitter account, which apparently didn’t take the skepticism that seriously. 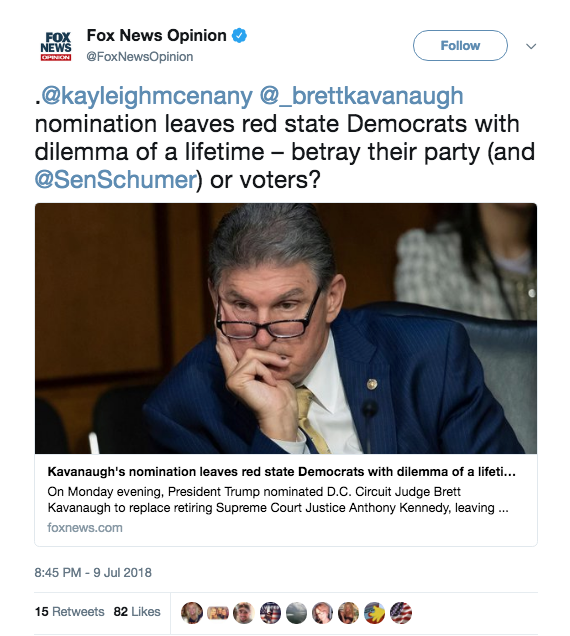 Another tweet offered a defense of Kavanaugh from right-wing attorneys John Yoo and John Delahunty. Here’s a screengrab of that tweet: 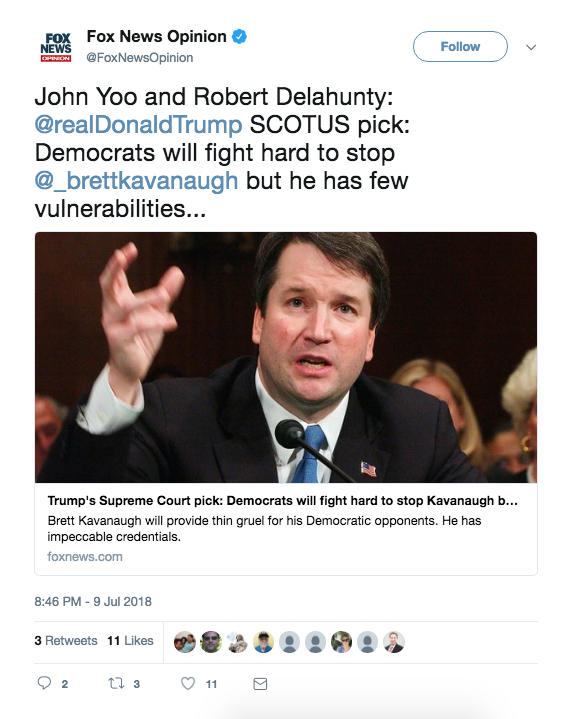 The third tweet offered reassurances from the First Liberty Institute’s Kelly Shackelford that Kavanaugh was a strong supporter of “religious liberty.” The final screengrab: 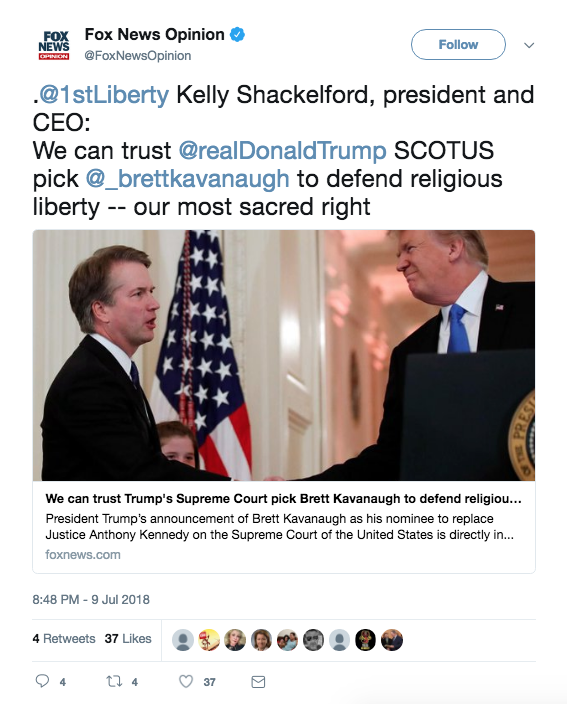 As noted, most of the fake Kavanaugh tweets were simply rehashed versions of various public statements and positions Kavanaugh has made or holds. Others were probably a bit too silly for much comment. But the culture war tweet was an obvious and arguably dangerous falsehood which was heavily retweeted before the account went dark. The content of that falsehood spread like wildfire across Twitter.

Law&Crime reached out to Fox News for comment on this story, but no response was forthcoming at the time of publication. After this story was published, Lynne Jordal Martin, senior editor of FOX News Opinion released the following statement to Law&Crime, “The tweets have since been deleted on our FOX News Opinion Twitter account and we regret the error.”

Editor’s note: this story has been amended post-publication to include a statement from Fox News and to reflect said statement.