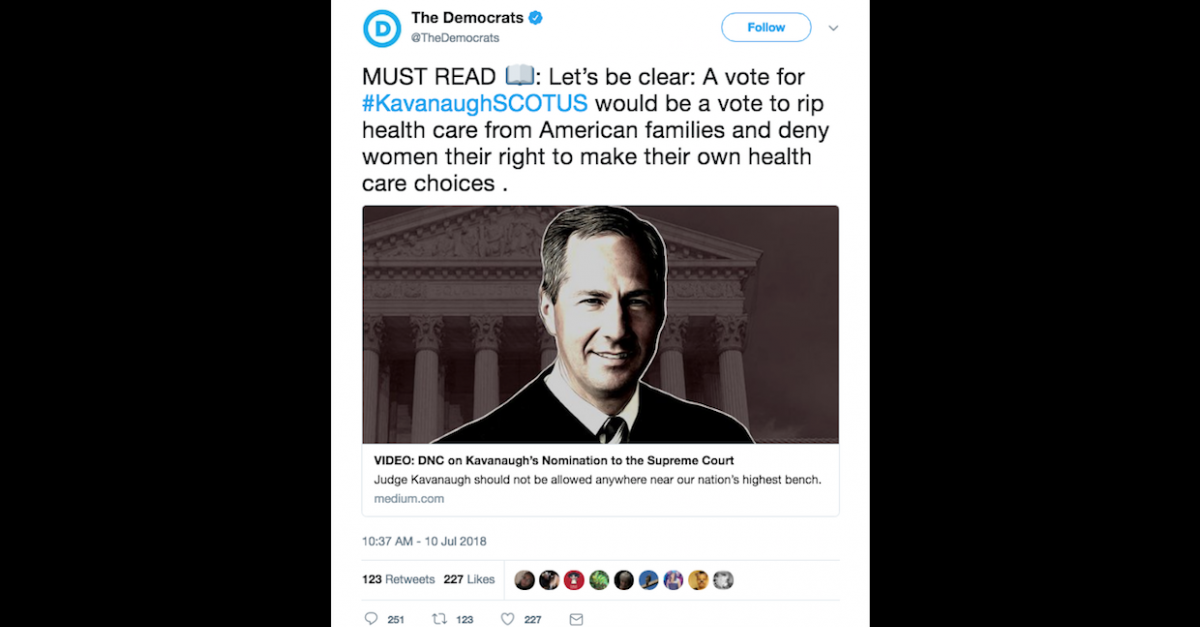 The Democratic Party wants you to know that they are very much resisting President Donald Trump‘s nomination of Brett Kavanaugh to the Supreme Court of the United States. That’s why they posted the following tweet earlier this afternoon:

MUST READ 📖: Let’s be clear: A vote for #KavanaughSCOTUS would be a vote to rip health care from American families and deny women their right to make their own health care choices.

Strong words–apparently aimed at Kavanaugh’s allegedly hostile record to one income-generating portion of the Affordable Care Act. Competent emoji use, too. Except the man in the image is not Judge Kavanaugh. Not even a little bit.

Instead, the official Twitter account for the nation’s oldest political party used an image of U.S. District Judge Thomas Hardiman. The image chosen appears to be heavily-edited and was almost certainly prepared in advance.

Law&Crime reached out to the Democratic National Committee’s press department for comment.

Hardiman was a rumored Supreme Court finalist each time President Trump has made such a nomination.

A staunch conservative in his own right, Hardiman’s judicial pedigree would have likely elicited similar accusations from Democrats had he actually been the nominee this time around. But, for the second time in a row, Hardiman has had to endure the presidential snub after waiting through weeks and weeks of speculation.

(In fact, the fever pitch surrounding Hardiman’s quite-possibly-imminent nomination went so high that a completely different Thomas Hardiman had to plead with people on Twitter to leave him alone.)

So much for Mr. Hardiman. Unless, of course, you’re the social media director for the Democratic Party. The tweet has since been deleted and in its place is the same verbiage with a similarly-edited image of Judge Kavanaugh.

MUST READ 📖: Let’s be clear: A vote for #KavanaughSCOTUS would be a vote to rip health care from American families and deny women their right to make their own health care choices. https://t.co/WpGjcjREEQ