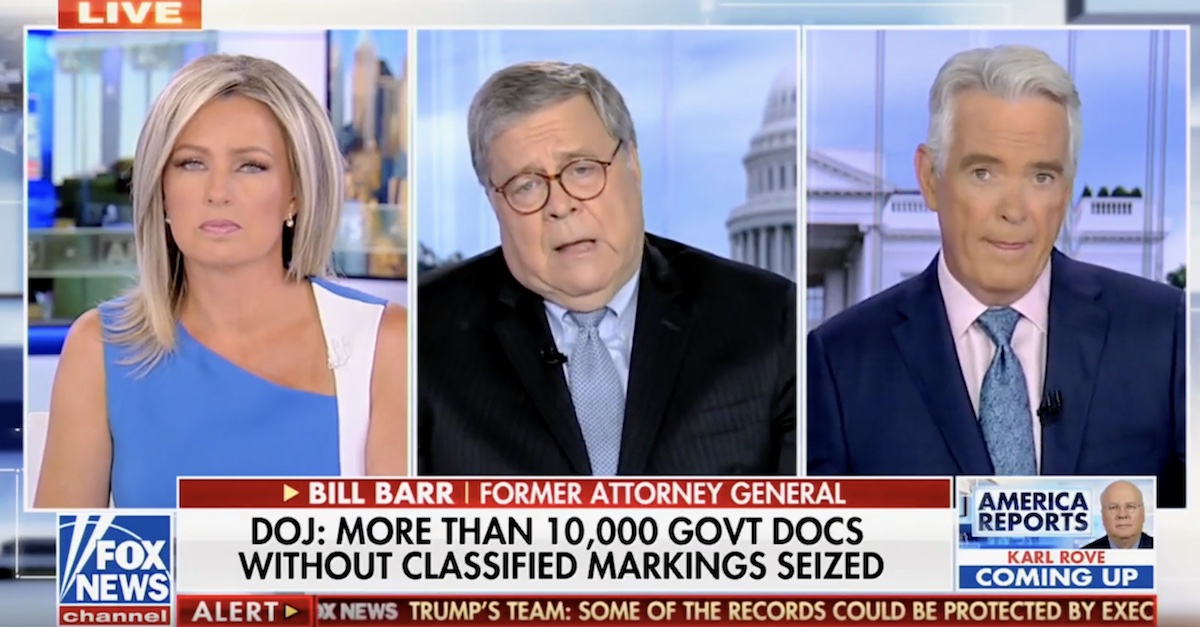 Bill Barr, the 77th and 85th Attorney General of the United States, appeared on Fox News and made clear Friday that he thinks the special master gambit currently being undertaken by Donald Trump’s lawyers in federal court is a “red herring” and a “waste of time.”

The assessment from the former Trump administration AG was sweeping and unambiguous on the issue of the special master. It came the day after a Trump-appointed federal judge reportedly appeared to warm to the idea of appointing a special master who would weed out documents from the seized Mar-a-Lago materials that might be covered by the attorney-client privilege.

“Well, I think the whole idea of a special master is a bit of a red herring. The only documents that have been taken, it seems to me, that there’s a legitimate concern about keeping away from the government and insulating the government from would be documents relating to his private lawyer communications, him as an individual and as outside lawyers,” Barr said, as noted by Mediaite. “If there’s stuff like that, fine. Identify it. There doesn’t appear to be much of it. I’m not sure you need a special master to identify it.”

Barr noted that there appears to have been “loads of classified information sitting in Mar-a-Lago.”

“I personally think for them to have taken things to the current point, they probably have pretty good evidence, but that’s speculation,” the former attorney general then opined.

He then indicated that the operation to seize the material was neither swift nor in his view unwarranted:

“They feel, and the record — the facts — are starting to show that they were being jerked around,” Barr continued, again referencing the current DOJ.  “And so how long, you know, how long do they wait?” he asked rhetorically.

Barr then said he was “skeptical” of what he called Trump’s “I declassified everything” defense:  “because, frankly, I think it’s highly improbable.”

“And second,” Barr continued, Trump’s manner of handling the declassification could have been bizarre:  “if, in fact, he sort of stood over scores of boxes, not really knowing what was in them and said, ‘I hereby declassify everything in here,’ that would be such an abuse, and that shows such recklessness that it’s almost worse than taking the documents.”

When asked whether a prosecution would occur, Barr said the issue would turn on “how clear the evidence of obstruction or deceit is.”

“I think it is clearly foolish what happened and inexplicable,” he continued in apparent reference to the movement of the documents and not to the DOJ’s decision to take them back.

“But beyond that, they may well be able to make a case out here,” Barr mused.  “But then there’s an additional question, given the fact this is a former president. Given the state of the nation . . . and given the fact that the government has gotten its documents back, does it really make sense to bring a case as a matter of prudential judgment?”

He then tried to answer his own question by pining for a negatory response.

“They may be inclined to bring that case,” Barr said.  “And, you know, there’s going to be differences of opinion, whether that makes sense. But we really have to know the facts to say, you know, to make a judgment about that. I hope it doesn’t happen.”