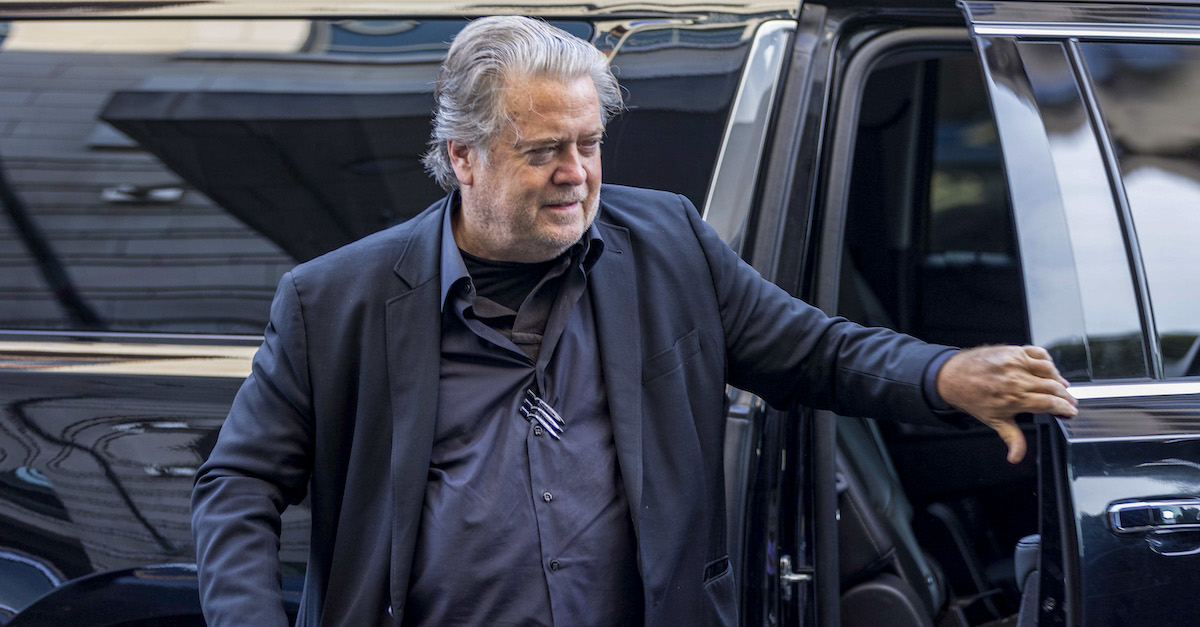 Former White House senior strategist Steve Bannon arrives at the Federal District Court House for the fifth day of his contempt of Congress trial on July 22, 2022 in Washington, D.C.

A Washington, D.C. federal court delivered a double denial to former White House strategist and top Donald Trump adviser Steve Bannon on Friday over his eleventh hour efforts to avoid being punished after his late July conviction on contempt of Congress charges.

U.S. District Judge Carl Nichols, a Trump appointee, previously asked the defendant to file additional briefing on his motion to dismiss — which Bannon’s attorney did in early August.

In his Friday order, Nichols rubbished the defendant’s arguments in the motion to dismiss as legally insufficient.

“In his supplemental brief, [Bannon] argues (as he did before and during trial) that his inability to compel certain members of the House of Representatives to testify violated his Fifth and Sixth Amendment rights,” the judge writes. “The Court disagrees.”

Nichols goes on to say that Bannon would have needed to show “that the evidence lost would be both material and favorable to the defense” — but Bannon failed to do that because he mostly only offered examples of questions he wanted to ask members of Congress.

Additionally, the court said the topics Bannon was trying to quiz elected officials on were “previously held [to be] irrelevant.”

The court also says Bannon “acknowledges” many of his would-be questions had already been deemed irrelevant.

Nichols’ order then runs through several additional arguments advanced by Bannon’s lawyers but concludes that none of those arguments really speak to the relevant legal standards at play – either to the elements of the offense on which the defendant was convicted or to the original burdens on the congressional committee itself.

“In the end, [Bannon] offers little to demonstrate that the actual testimony he would elicit would have been material to the issues at trial,” the order says. “That falls short of his burden.”

In late August, Bannon essayed additional arguments to support a motion for a new trial.

The court also dismissed that motion on Friday.

The core of the new trial request, the court noted, had to do with a disputed interpretation of the word “willfully” in the relevant statute “along with the Court’s other holdings that flowed from that interpretation.”  Bannon posited an analysis that would “necessitate a new trial.”

However, Nichols said Bannon’s theories were simply out of a low-level district court’s hands.

Bannon also complained about the makeup of various jury instructions. In one instance, the defendant’s attorneys claimed that their own theory was improperly excluded from the jury instructions, but the court noted that the defense failed to cite any legal authority as to why its theory should have been included.

“Defendant also appears to take issue with the Court’s having defined the meaning of the criminal statute for the jury,” Nichols drily muses later on. “But that is precisely the Court’s role.”

The court goes on to defend against claims that other instructions were included in error while giving Bannon’s team a nod toward on what and how they might appeal, should they file one.