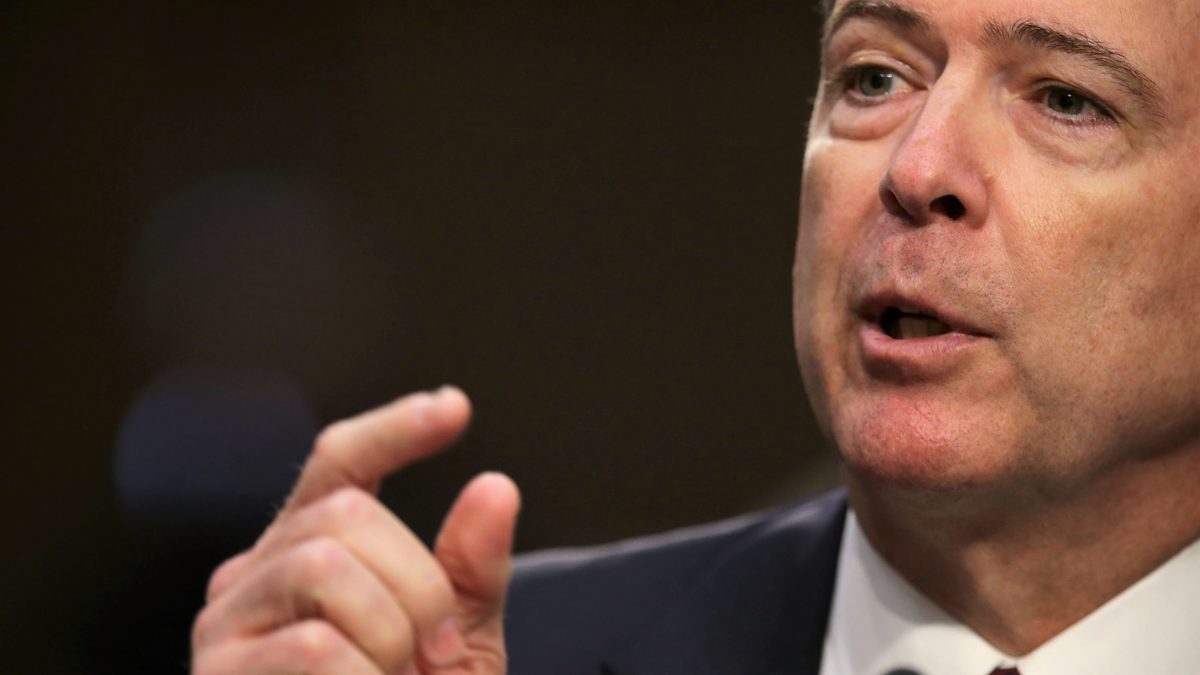 In a colorfully-worded opinion, a federal judge late Monday slammed what he called the FBI’s legal “chutzpah” for coming up with a new excuse not to give CNN information surrounding the memos of former FBI Director James Comey.  The memos were Comey’s attempt to make a record of his conversations with President Donald Trump.

Here’s the short version of the background as contained in Monday’s opinion.  CNN and other news organizations sought the Comey memos 2017.  When the FBI cited the “then-ongoing nature” of the Mueller investigation and refused to make the memos public, CNN sued.  A federal judge initially refused to force the FBI to turn the memos over.  Then, however, the FBI turned redacted versions of the memos over to Congress.  Through Congress, the press gained access to redacted versions of the memos.  CNN continued to litigate for the full memos, and a federal appeals court sent the case back to the lower district court to determine what, if anything, from the redacted portions of the memos could be turned over to CNN.  Most of the information was eventually handed over to CNN and others.

CNN wanted more, however, including two declarations made by FBI agents during the course of the litigation and a transcript of a so-called “ex parte proffer” (that’s when the FBI provided information to the judge during the original litigation but without CNN’s attorneys present).  Again, the FBI gave most of the information to CNN, but not all of it.  One remaining declaration from one remaining FBI agent remained the sticking point.  That’s what this case is about.  The judge agreed CNN should have it on common-law and First Amendment grounds.

Rather than provide the declaration pursuant to the judge’s order, the FBI fought back. In doing so, the FBI did something that any second-year law student knows is not a good idea:  the FBI came up with new reasons why CNN should not have access.  The new excuse was Freedom of Information Act Exemption 3.  That’s the part of FOIA which says the government cannot disclose information which is barred from disclosure by other statutes.  (The Department of Justice’s guide on how to employ Exemption 3 is worth reading if you’re having trouble sleeping; the DOJ’s Web site on the matter is only marginally more palatable.)  The FBI went further than just conjure the new excuse.  It also tried to argue that the court should have raised Exemption 3 on its own volition after looking at the contents of the declaration to prevent CNN from obtaining it.

To no one’s surprise, Judge James E. Boasberg of the D.C. district was not impressed with the FBI’s newly-discovered legal stance.  Here is how the judge summed it up:

Defendant Federal Bureau of Investigation never mentioned Freedom of Information Act Exemption 3. Nor did that exemption make any appearance in an FBI agent’s declaration filed in support of the Government’s position. In now seeking partial reconsideration of the Court’s decision, the Bureau nevertheless contends that the Court’s failure to address Exemption 3 constituted either “clear error” or “manifest injustice.”  The Court, Defendant believes, should have construed three sentences of the declaration — which referred to a different statute altogether — as not only invoking FOIA Exemption 3 but also fulfilling Defendant’s burden of demonstrating the applicability of that exemption, and thus delivering it victory. While such a position certainly takes chutzpah, it does not take the cake here.

In other words, the FBI lost.  Again.

Judge Boasberg noted that at this stage in the proceedings, Civil Procedure Rule 59(3) governs.  That Rule, the judge noted, “is discretionary and need not be granted unless the district court finds that there is an intervening change of controlling law, the availability of new evidence, or the need to correct a clear error or prevent manifest injustice . . . [c]ritically, Rule 59(e) is not a vehicle to present a new legal theory that was available prior to judgment.”

The judge called the FBI’s argument to revisit the case a “mulligan” — in other words, the original argument was poor — and said the FBI’s attempt to stretch Rule 59(e) to cover this matter was “a bridge too far.” What’s more, the judge said that even if the FBI had argued Exemption 3’s applicability to the case from from the beginning, it still wouldn’t have been a winning argument.   The “murky waters” of the FOIA exemption do not easily dovetail into the laws governing access to court records, the judge wrote, and the FBI did not “wrestle with” the broader issues.  “This deficiency adds to the stack of reasons counseling against reopening this can of worms,” the judge concluded.

The FBI initially attempted to justify withholding the information because, in part, the content contained “‘non-public information about intelligence methods’ that the FBI was ‘obligated to protect . . . under the National Security Act of 1947.'”  The judge said that “invoking the National Security Act was not a way around the common-law right of access to judicial records.”

For those partisans keeping score, Boasberg was appointed to his current role by Barack Obama, but Chief Justice John Roberts appointed him to the Foreign Intelligence Surveillance Court, and George W. Bush appointed him to a previous job.