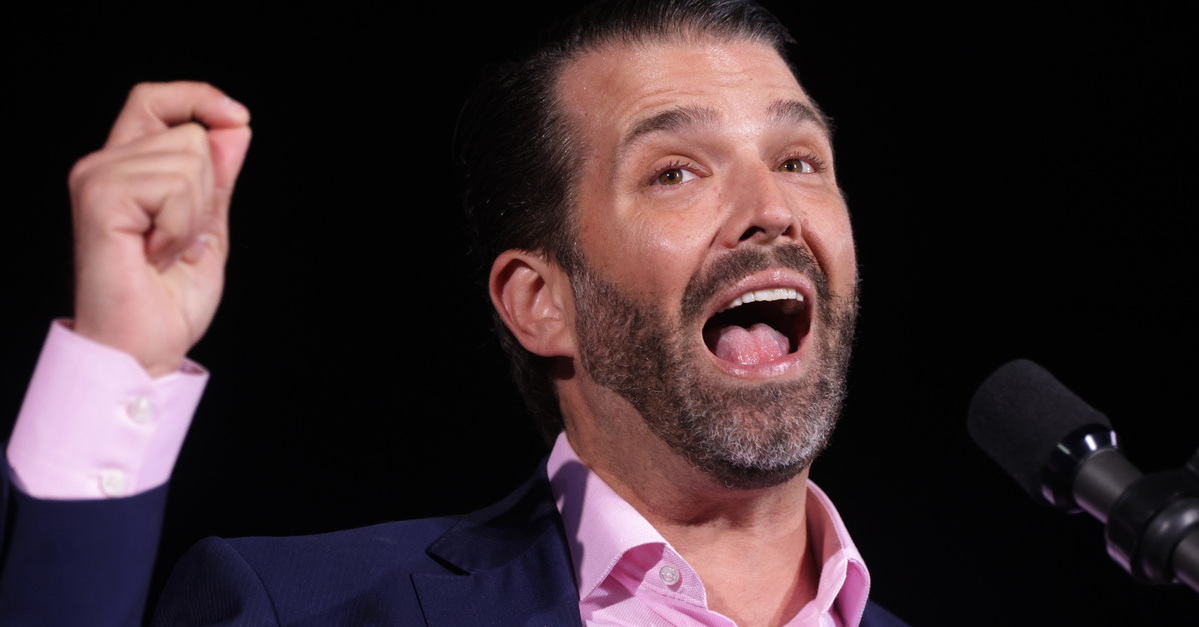 Blankenship, who served time behind bars in connection with his role in a 2010 coal-mining disaster, sued the former First Son for defamation. The plaintiff alleged that Trump, Jr. defamed him in a series of tweets that referred to Blankenship as a “felon.”

The dispute between Blankenship and Trump, Jr. was born of online political warfare over the West Virginia senatorial election on May 8, 2018. In the immediate lead-up to the election, Don Jr. urged his followers to vote against Blankenship.

“I hate to lose,” wrote Trump, Jr., “So I’m gonna go out on a limb here and ask the people of West Virginia to make a wise decision and reject Blankenship!”

I hate to lose. So I’m gonna go out on a limb here and ask the people of West Virginia to make a wise decision and reject Blankenship!

No more fumbles like Alabama. We need to win in November. #wv #wvpol

On the same day, CNN’s Dan Merica posted a tweet, linking to an article he authored, captioned, “Trump’s son urges West Virginia Republicans to reject Blankenship, who responds by labeling @DonaldJTrumpJr part of the ‘establishment.'”

Merica commented in his piece that Trump, Jr.’s tweet was “the clearest signal yet” that Republicans considered Blankenship a political threat.

“National Republicans were worried when Blankenship jumped into the race,” argued Merica, “given that the former CEO of Massey Energy had just recently finished serving a yearlong sentence following a misdemeanor conviction for his involvement in the deadliest US mine explosion in four decades.”

Trump, Jr. responded to Merica’s piece in another tweet, which included a link to the CNN article. “Ha, now I’m establishment?” Trump, Jr. seemingly asked Blankenship. “No, I’m realistic & I know the first thing Manchin will do is run ads featuring the families of those 29 miners killed due to actions that sent you to prison.”

Ha, now I’m establishment? No, I’m realistic & I know the first thing Manchin will do is run ads featuring the families of those 29 miners killed due to actions that sent you to prison. Can’t win the general… you should know that & if others in the GOP won’t say it, I will. https://t.co/3dBmoVrMF1

Another Twitter user responded to Trump Jr.’s tweet, remarking, “Don’t think Manchin will do that. His ads are usually ab[ou]t him.”

Trump, Jr. then responded to that user, replying, “He’s probably never run against a felon.” That tweet appears to have been deleted since its original posting, and it forms the basis of Blankenship’s lawsuit.

Blankenship brought a civil action in federal court against Trump, Jr. alleging that the tweets above constituted defamation, false light invasion of privacy, and civil conspiracy. Blankenship had been convicted of a misdemeanor, not a felony.

Trump, Jr. moved to dismiss the defamation and false light claims. The court, however, ruled in Blankenship’s favor on the motion, and the case now moves ahead toward trial.

Trump, Jr.’s argument — one by which the district court was utterly unconvinced — was that his tweet simply conveyed an opinion, as opposed to a fact. Trump, Jr. also argued that his reply tweet had only been directed at a single twitter user, and not at Blankenship himself. Trump, Jr. also offered the justification that his use of the term “felon” had not been the focus of the tweet, but rather, was an “incidental” reference.

The former FSOTUS offered an argument in the alternative that even if his words did constitute a statement of fact, and even if that statement had been wrong, that he made a “reasonable assumption” that Blankenship was a felon.

John T. Copenhaver, Jr. (a 95-year-old Gerald Ford appointee serving on “senior status”) penned the opinion for the U.S. District Court in West Virginia. Ruling that Blankenship’s case was strong enough to move forward, Copenhaver noted that Trump, Jr. conceded his actual knowledge of Blankenship’s history with respect to the mine explosion.

“Based on this article that Trump, Jr. himself cites within his own quote tweet,” Copenhaver wrote, “there is a plausible inference that he had knowledge of the plaintiff’s conviction history in association with the mine explosion, and in particular that the conviction was a misdemeanor, not a felony.” This misstatement, coupled with Trump, Jr.’s likely knowledge of its inaccuracy, “supports a plausible allegation of reckless disregard for the truth,” concluded the judge.

In an argument that seems to echo those we’ve heard from former President Donald Trump, the defendant Trump, Jr. argued that his reply tweet had been simply “an exaggeration,” and that he had been merely offering “colorful rhetoric” in an effort to make a point. “Trump, Jr. asserts,” wrote the judge, “that this type of ‘loose, figurative, or hyperbolic language’ is protected by the First Amendment.”

Judge Copenhaver summarily rejected these arguments, writing that Blankenship “is clearly a subject of both the quote tweet and the reply tweet,” and noting that “[t]here is no requirement in a defamation suit that the statement be directed toward the victim.” “[T]he nature of Twitter posts, including replies,” remarked the judge, “is that they are in the public view.” “Whether or not someone has committed a felony, and therefore may be identified as a felon,” continued the judge, “is a factual determination.”

In response to Trump, Jr.’s argument that the felony-misdemeanor distinction is not enough upon which to base a defamation claim, Judge Copenhaver wrote, “[t]he court by its nature understands the distinction between a misdemeanor and a felony.”

“Although the exact difference between these categories may not be as clear to general society,” he continued, “the court agrees with the plaintiff that ‘society at large’ might view[] a ‘felon’ far differently than a person who has committed an offense resulting in a misdemeanor conviction.” At this stage, the court ruled, “Trump Jr.’s tweet labeling the plaintiff a felon was not a substantial truth or a minor inaccuracy.”

Wednesday’s ruling in Blankenship’s favor does not mean that he will ultimately win the lawsuit, but it does mean that his case against Donald Trump, Jr. will now proceed toward trial. Blankenship has, in the past, sued multiple media outlets with similar claims.

Attorneys for Don Blankenship and Donald Trump, Jr. did not immediately respond to request for comment.