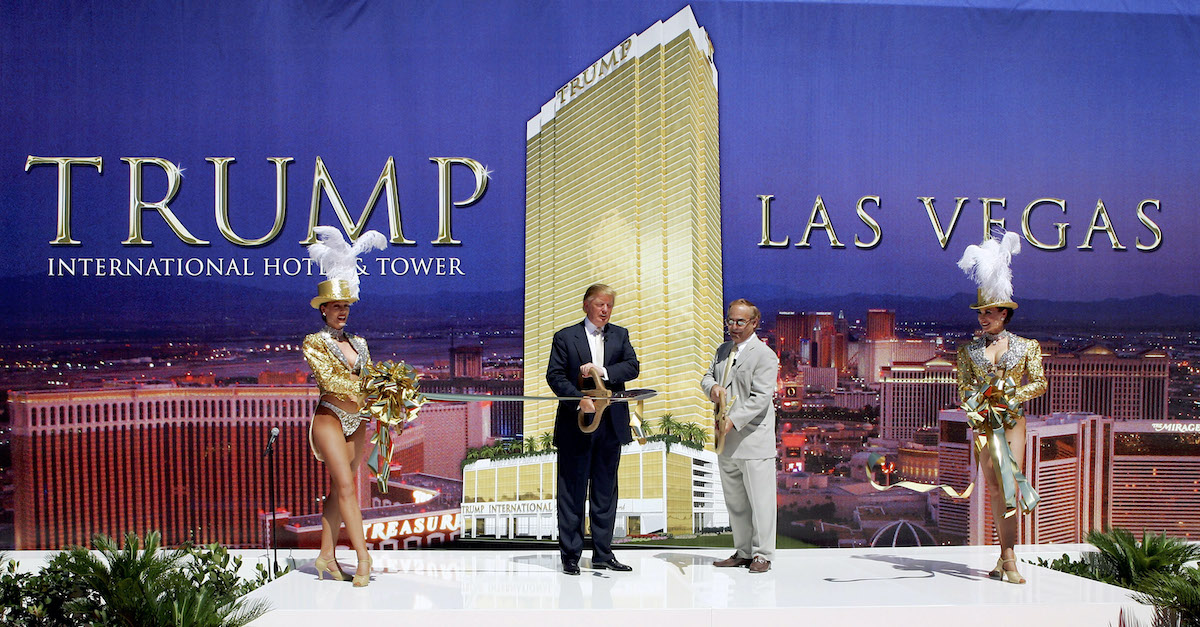 Earlier this week, a man in a red, white and blue hat exited a pink Checker Cab taxi and walked into the lobby of the 64-story Trump International Hotel along the Las Vegas Strip carrying a large black bag and a suitcase.

After putting both on the floor, the man allegedly said: “Everybody needs to leave building. There is a bomb in here.”

Roughly a minute later, the man waved at the security camera, entered the same cab and drove away.

So begins the probable cause statement against Dandre Maurice Lundry, the 44-year-old Detroit, Michigan man suspected of six offenses involving hoax bomb threats against the 45th president’s favored hotel on the West Coast.

That was not the only threat that Lundry allegedly flung at the Trump Hotel on Tuesday.

At 12:54 p.m., mere minutes after the in-person threat, a call came in a Trump Hotel Reservations number where the woman who picked up reported hearing a static-filled line with the caller saying: “Bomb. 15 minutes to evacuate the building,” according to the probable cause statement obtained by Law&Crime.

Police say the woman checked the caller ID to find that the same number had dialed in earlier, in a call that was disconnected.

“Due to Lundy’s actions, customers and employees inside the hotel were alarmed and scared,” a detective with the Southern Nevada Counter Terrorism Center wrote in the arrest report. “Employees and customers feared there was a bomb in the lobby and took cover in secure areas as well as immediately exiting the hotel. Lundy’s actions caused extreme alarm at the hotel and resulted in people being evacuated and business coming to a stop to insure everyone was safe.”

According to the arrest record, Lundy appeared not to appreciate the gravity of his alleged actions once detectives detained him.

“Can I get my suitcase back from Trump?” Lundy allegedly asked detectives. “I told them it’s a bomb. No one got hurt. So there’s no crime.”

The Clark County District Attorney’s Office told Law&Crime that formal charges have not yet been filed, but public records show that Lundy is suspected of six offenses: two counts of communicating a bomb threat, two counts of making false threats regarding an act of terrorism, one count hoax bomb used in furtherance of another felony and a count of burglary of a business.

Prosecutors have until Sept. 9 to file a criminal complaint.

According to the Las Vegas Metropolitan Police Department report, Lundy further opened up after detectives read him his Miranda rights.

Lundy allegedly told detectives that he wanted to send Trump a message that he is “a beast,” adding that he believed the former president had “messed up his life for the last 3 years.”

“Lundy admitted he took a cab to the Trump Hotel, walked inside with the suitcase and bag, placed them down and stated there was a bomb in them,” the report states.

Police say that Lundy said he placed a Bible, rock and $1 dollar bill inside the suitcase, along with handwritten “scriptures” identifing Trump as a beast.

According to Lundy’s case docket, the District Attorney’s office initially referred his case for prosecution on Tuesday.

“The State has provided clear and convincing evidence that no less restrictive alternative to monetary bail will satisfy its interests in ensuring the defendant’s presence and community safety,” the docket states.

Update—Sept. 2 at 4:08 p.m.: This story has been updated with a change of headline and details from arrest records obtained by Law&Crime.