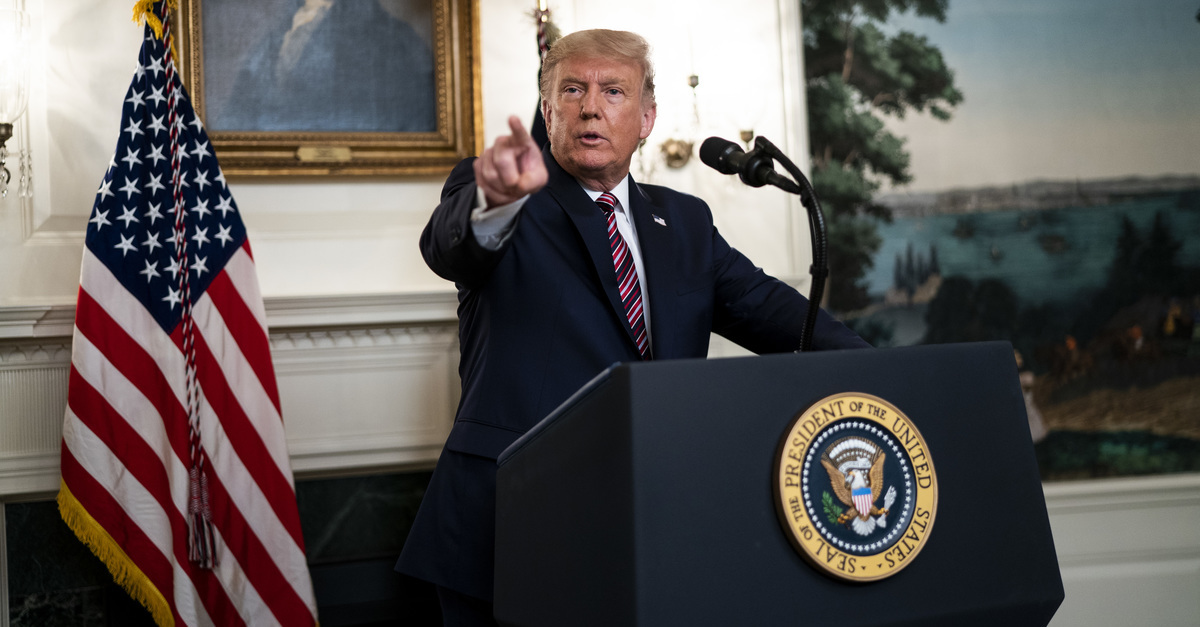 A Second Circuit Court of Appeals panel panned arguments from Donald Trump’s lawyers in opposition to the Manhattan District Attorney Cy Vance’s criminal subpoena of a third party for the president’s tax returns.

The Friday arguments evidently didn’t go well in the judge’s eyes because Trump lawyer William Consovoy refused to concede that there is a documents request Vance could make that would not be overbroad. Consovoy asserted this despite Supreme Court precedent from July that held the president is not absolutely immune to the state criminal process.

Consovoy: "That would be far narrower, no question. It's far less overbroad."

Judge Lohier: "Is there a request for documents … that would not, in your view, be overbroad?"

Consovoy answers in the negative.

“That’s a problem,” shot back Circuit Judge Raymond Lohier, a Barack Obama appointee. Consovoy did have a retort, however. To support the notion that Vance is on an endless “fishing expedition” of seemingly unlimited scope, Consovoy dinged the DA’s Office for relying on media reports as a pretext for a broader investigation of Trump and Trump Organization financial records.

On Monday, Vance argued in an appellate brief that he needs to get Trump’s tax returns out of the hands of Mazars USA and into the hands of a grand jury because news reports indicate that a “criminal tax fraud” investigation is warranted.

The brief filed in the Second Circuit cited reports from The Washington Post, The Wall Street Journal, and The New York Times to provide a “snapshot” for the court of the Trump Organization’s “financial improprieties” that “could potentially violate New York law.”

“These reports have identified transactions spanning more than a decade, involving individual and corporate actors who were based in New York County,” the brief said.

Vance’s office cited several New York state criminal laws in an apparent attempt to convince the court that there are a variety of potential crimes to investigate—beyond hush payments Michael Cohen executed on Trump’s behalf before the 2016 election. Put another way, Vance says the public record sufficiently debunks the president’s claims that he is merely being harassed by a county prosecutor’s fishing expedition. Vance argued instead that where there’s smoke there’s fire.

Circuit Judges Pierre Leval and Robert Katzmann, both Bill Clinton appointees, appeared to be sympathetic to the DA’s arguments and skeptical about Team Trump’s arguments.

Leval used the words “deeply contrived” to describe Consovoy’s arguments, while Katzmann wondered out loud if Consovoy was proposing that the Second Circuit “change the way grand juries have done their work for time immemorial just because someone is President of the United States?”

Merriam-Webster defines the word contrived as “having an unnatural or false appearance or quality.” Leval is saying that Consovoy’s arguments are lathered up with the veneer of legal merit.

Lohier also questioned the Trump argument that the grand jury investigation cannot be allowed to evolve and expand.

"To say that a DA and a grand jury investigating fraud in a tax return can only look at business operations in Manhattan … seems to me to be far-fetched."

“Why should we require a specific allegation that this is the one grand jury investigation that’s unique in that it’s stuck, it cannot expand beyond the 2016 Cohen payments?” Lohier asked.

Lawyers, usual suspects among them, promptly pounced on this judicial shade.

Where could this head from here?

If, indeed, the Second Circuit panel rules against the president as they telegraphed on Friday, Trump lawyers will almost certainly seek an en banc rehearing that would drag out proceedings further. If need be, the Supreme Court, whatever its composition, will be the last resort.

After Trump loses to Vance 3-0 in the 2d Circuit, as it certainly looks like he will, he’ll probably seek en banc review & lose there. Then he’ll ask his by-then stacked SCOTUS to bail him out. Even there he should lose. But will he? Watch this space. https://t.co/9ZS2tKYh6t

Remember Trump v Vance. Now in Second Circuit, its likely last stop (Sup Ct will be asked to take, and will stay while it decides, but will turn it down). @thedeannapaul with solid coverage of where things stand and where they are going. https://t.co/XZyWdkKAjf