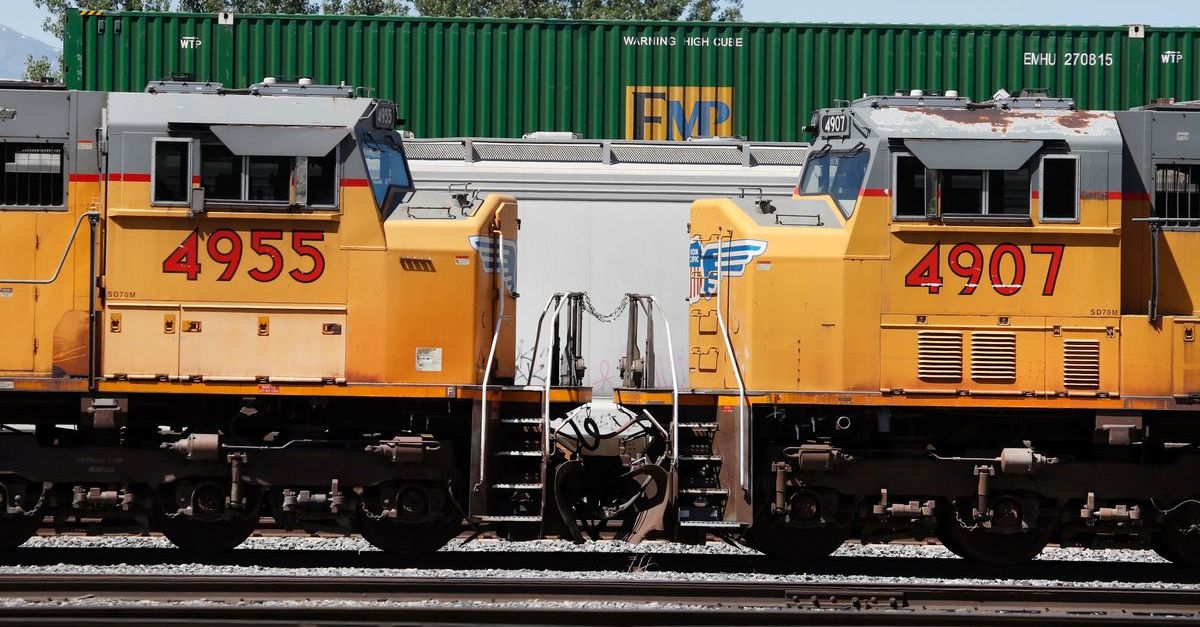 Two Union Pacific train engines face each other as they sit idle at a train yard in Salt Lake City, Utah on June 9, 2020.

Matthew Lebsack, a railroad engineer who got back at his boss by taking a dump “on the connector between two cars,” throwing “soiled toilet paper out of the window,” and saying he “left a ‘present’ for him,” gets to keep his job, a federal appeals court begrudgingly decided on Wednesday.

“All this despite the restroom being just steps away,” three Republican-appointed circuit judges noted. “His coworkers then had to clean up the mess using bottled water and paper towels.”

As Law&Crime previously reported in late 2019, Lebsack was victorious at the district court level in the dispute between himself and his union on one side and Union Pacific on the other.

Each court, in turn, found that they were bound by the prior decision of the National Rail Adjustment Board, an arbitration body which criticized the underlying behavior but said that firing the engineer would simply be an unjust over-correction, all things considered.

“Although this Court has ruled in favor of SMART as to the reinstatement of Mr. Lebsack, this Court is troubled with this case,” U.S. District Judge Brian C. Buescher wrote in the original decision. “Upon careful review of the record, this Court is puzzled how the arbitration board in this matter came to the conclusion that Mr. Lebsack’s actions of purposely defecating on the knuckle of his train and leaving his feces for others to clean up somehow did not constitute conduct worthy of upholding his termination.”

The bewildered U.S. Court of Appeals for the Eighth Circuit echoed those concerns in their opinion dismissing the company’s complaint:

We share the district court’s bewilderment at the [Rail Adjustment] Board’s conclusion that a company cannot fire someone for purposefully defecating on company property. Even so, we cannot review the merits. Precedent limits us to asking if the Board is “arguably construing or applying the contract and acting within the scope of [its] authority.” We conclude that the Board applied the governing [collective bargaining agreement] and acted within the scope of its authority.

“After the parties’ arguments, the Board first issued an Interim Award reinstating Lebsack and later issued a Final Award upholding that decision,” the opinion notes. “The Board viewed termination as too harsh given Lebsack’s mitigating circumstances and his faithful service record. The Final Award concluded by emphasizing that ‘such conduct in the future cannot be tolerated nor excused.'”

Given that [Lebsack] was a long-term employee with a known history of psychological issues, before any disciplinary action was contemplated, it would have been reasonable for [Union Pacific] to have first sent [Lebsack] for comprehensive psych and medical evaluations to determine his fitness for duty and the credibility of his explanations. If found fit, it would then have been appropriate to handle the incident strictly as a disciplinary matter.

“The award only addresses Lebsack’s case,” the Eighth Circuit notes. “It imposes no prospective, all-encompassing duty on Union Pacific for any future cases.”

The three-judge panel also explained that the arbitration board is allowed to fashion its own resolution for bad employee behavior so long as its decisions are based on the operative collective bargaining agreement and, in this particular case, meet two contractual criteria contained in the collective bargaining agreement: (1) notifying the employee they are being targeted for discipline; and (2) conducting a fair and impartial investigation before meting out discipline.

“Unlike [in two cases cited by Union Pacific], this [collective bargaining agreement] does not expressly restrict the [Adjustment] Board’s authority to review and modify Union Pacific’s remedy choice, even in a just-cause termination,” the decision notes. “Without such a limit, we hold that the Board’s remedy did not contradict or alter the [collective bargaining agreement’s] terms.”