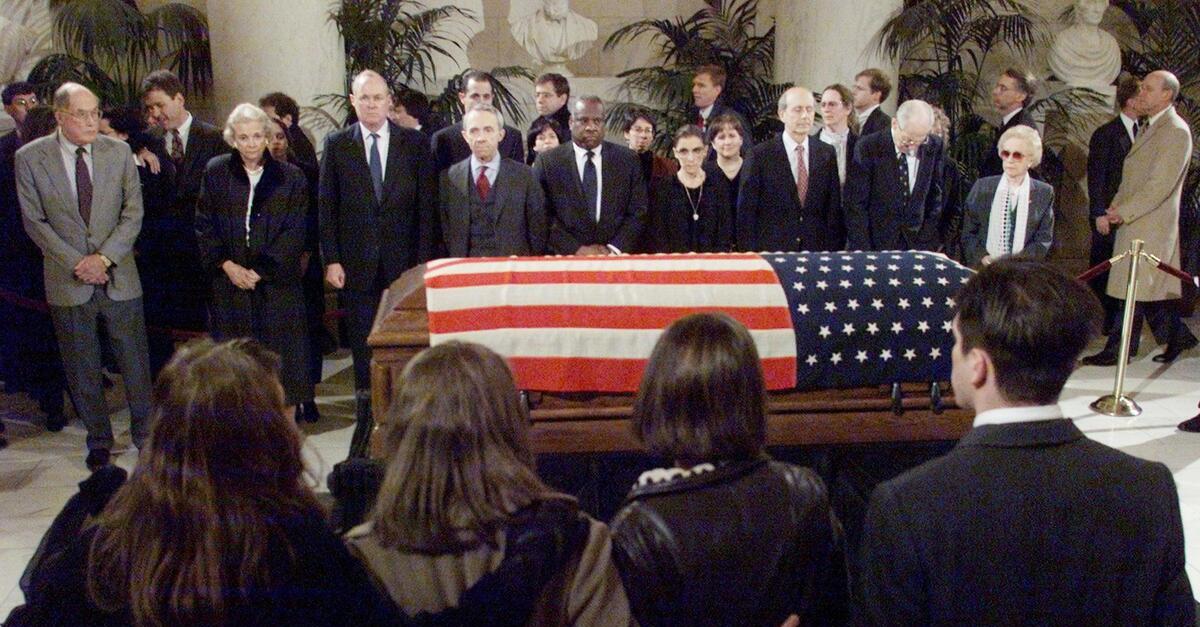 An amicus brief filed with the Supreme Court of the United States on Thursday contains several references to what the far-right authors term “paganism.” Those references are not positive and are marshaled in service of an argument that all abortions should be made illegal.

Filed by attorneys Phillip L. Jauregui and William J. Olson on behalf of Intercessors for America, the brief was submitted in the extant case stylized as Dobbs v. Jackson Women’s Health Organization, which is Mississippi’s effort to overturn the landmark case of Roe v. Wade.

Writing on behalf of the Magnolia State’s efforts to turn back time on women’s reproductive choice in favor of fetal rights and “God’s law,” the brief argues that the high court’s 1973 decision legalizing abortion and subsequent jurisprudence was “built on a pagan foundation.”

“Roe v. Wade begins its defense of abortion based on a survey of pagan nations,” the brief argues–citing the 130th page of the opinion.”The Court discussed ‘Ancient Attitudes,’ concluding that during Greek times and the Roman Era,'[a]ncient religion did not bar abortion’ and abortion ‘was resorted to without scruple.’”

The filing goes on to sum up the binary:

On the other hand, the “emerging teachings of Christianity were in agreement with” the view that “the embryo was animate from the moment of conception, and abortion meant destruction of a living being.” Thus, the Court properly viewed abortion to be very much a religious question, which the Court correctly understood to be a choice between Christianity and pagan doctrine.

That bifurcation is of exceptional importance to the amici whose website describes their group in the following way:

Intercessors for America (IFA) is a 501(c)(3) ministry organization and was founded in 1973 when God impressed upon the hearts of a group of godly, respected men the necessity of prayer and fasting. The nation was experiencing a plethora of problems. The Watergate scandal, Vietnam War, Arab oil embargo, Roe v. Wade, a growing acceptance of drug use, and other challenges were changing the way Americans lived and thought.

A group of Christians at a teaching conference in Florida focused on “prayer for the nations.” Challenged by the fresh and extraordinary teachings of the conference leaders, Derek Prince and Ern Baxter, a half dozen men were chosen to steward the movement of prayer and fasting for the nation. This group would become Intercessors for America. One of the first activities of the organization took place at a large dining table where John Talcott and his wife, Roselyn, wrote and assembled a prayer letter. This prayer letter was mailed to a group of like-minded people who recognized the need for God to intervene in U.S. governmental and cultural issues. From these beginnings, IFA has grown to impact the masses. Our leadership is comprised of staff and a board of directors, some of whom have been with the ministry since its inception.

“These leaders saw Roe as a tragedy, but also a sign — a warning — to the People, that the nation had opened itself up to the judgment of a Holy and Righteous God,” the brief notes–echoing the group’s website. “Biblical principles were being replaced by pagan principles. At such a time, they believed, it would be necessary to rally Americans to call upon the Lord. IFA continues to urge Christians to engage in the disciplines of prayer and fasting to overturn Roe — the same way in which the People have responded to other threats to the country throughout its history.”

In Roe, however, the late justice Harry Blackmun offered a more nuanced take on so-called “paganism” and “Christianity.”

Ancient attitudes. These are not capable of precise determination. We are told that at the time of the Persian Empire abortifacients were known and that criminal abortions were severely punished. We are also told, however, that abortion was practiced in Greek times as well as in the Roman Era, and that ‘it was resorted to without scruple.’ The Ephesian, Soranos, often described as the greatest of the ancient gynecologists, appears to have been generally opposed to Rome’s prevailing free-abortion practices. He found it necessary to think first of the life of the mother, and he resorted to abortion when, upon this standard, he felt the procedure advisable. Greek and Roman law afforded little protection to the unborn. If abortion was prosecuted in some places, it seems to have been based on a concept of a violation of the father’s right to his offspring. Ancient religion did not bar abortion…

Dr. Edelstein then concludes that the [Hippocratic] Oath originated in a group representing only a small segment of Greek opinion and that it certainly was not accepted by all ancient physicians. He points out that medical writings down to Galen (A.D. 130-200) ‘give evidence of the violation of almost every one of its injunctions.’ But with the end of antiquity a decided change took place. Resistance against suicide and against abortion became common. The Oath came to be popular. The emerging teachings of Christianity were in agreement with the Pythagorean ethic. The Oath ‘became the nucleus of all medical ethics’ and ‘was applauded as the embodiment of truth.’ Thus, suggests Dr. Edelstein, it is ‘a Pythagorean manifesto and not the expression of an absolute standard of medical conduct.’

In any event, the amicus brief argues that the resulting case law–and all of its progeny–have “de facto established paganism as our nation’s religion.” The authors then offer a direct-line link from paganism to the thoroughly modern concept of “secular humanism” by way of a Teddy Roosevelt quote that does not mention secular humanism at all.

“[I]n one area of law after another, this Court has abandoned the Bible and embraced Secular Humanism and its ancient cousin: paganism,” the brief argues.

The hallmarks of this pagan/secular humanistic national embrace are, according to the brief, “elevation of the collective over the individual,” “evicting God from government schools,” and “rewriting the Establishment Clause to undermine Christianity.”

These three symptoms of the decline that allegedly began with Roe have, again according to the brief, “opened the people to God’s righteous temporal judgments.”

“[T]he Court should be aware that the fabric of the nation seems to many to be unraveling,” the right-wing attorneys warn. “The point is that God rules in the affairs of men, and He cannot ignore the shedding of innocent blood. Holy Writ provides many illustrations of how the righteous judgment of a Holy God can be triggered against the people of a land.”

The point here, the brief argues, is that “paganism is a religion” and that people are “turning away from the worship of God while ignoring the fact that something is being turned to in its place.”

Not to be outdone, a footnote helpfully explains that a formerly fundamentalist Christian iteration of American bard Bob Dylan “penned a modern statement of this truth” by way of his 1979 song, “Gotta Serve Somebody.”

“America is under bloodguilt, and we should not be surprised that God may bring — or may now be bringing — His judgment upon America and Americans for all this shedding of innocent blood,” the filing warns in ominous terms. “Amici Intercessors pray that this Court, as it recently did with Korematsu v. United States, would use the occasion of this important case to review and repudiate Roe, relegating it and its progeny to the dustbin of history.”