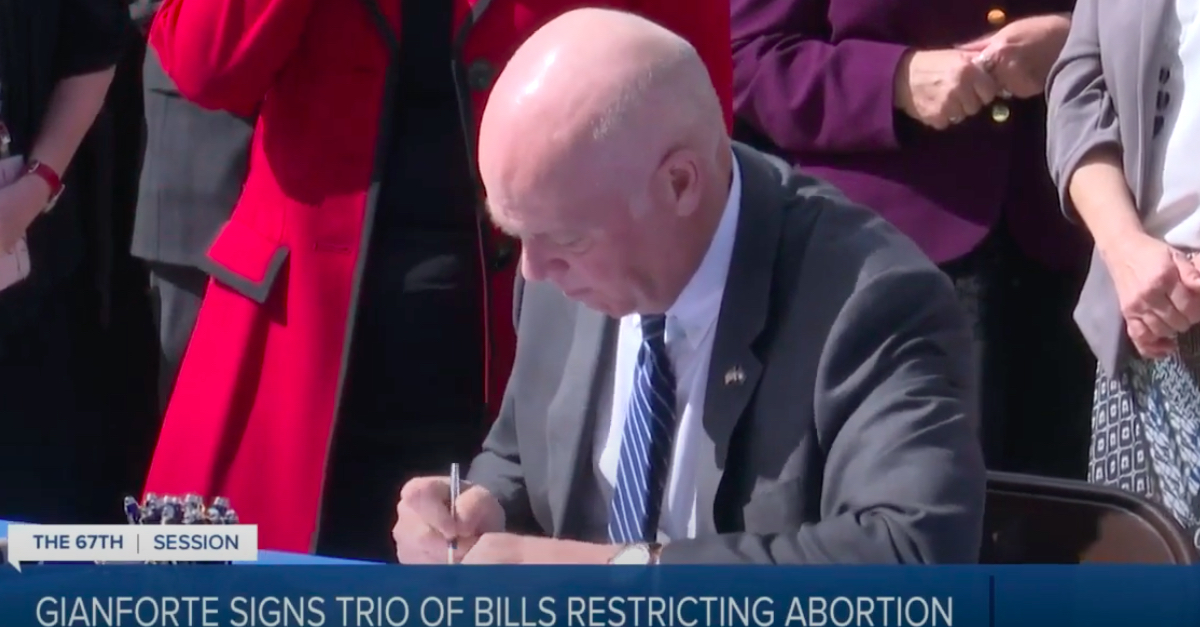 Montana Gov. Greg Gianforte (R) on Monday signed a series of bills that will curtail women’s access to abortions, including one that bans the procedure after 20 weeks. Gianforte adds Montana to a growing list of Republican-led states that have recently passed similar anti-abortion measures.

The Montana Pain-Capable Unborn Child Protection Act, the most restrictive of the three bills, says it is preventing abortions after 20 weeks because “there is substantial medical evidence that an unborn child is capable of experiencing pain by 20 weeks gestational age.” However, the vast majority of medical experts have rejected that claim for years, saying that the connections between the requisite nerves and the neurons that carry pain signals aren’t developed until the third trimester, typically around 26 or 27 weeks into a pregnancy.

“Rigorous scientific studies have found that the connections necessary to transmit signals from peripheral sensory nerves to the brain, as well as the brain structures necessary to process those signals, do not develop until at least 24 weeks of gestation,” the American College of Obstetricians and Gynecologists said in a memo written during the Trump administration. “Because it lacks these connections and structures, the fetus does not even have the physiological capacity to perceive pain until at least 24 weeks of gestation.”

The 20-week ban has no exceptions for rape or incest, but does allow abortions after 20 weeks if it is “necessary to prevent a serious health risk to the unborn child’s mother.”

Gianforte also signed two other anti-abortion measures into law. HB 171 requires any abortion-inducing medication to be administered to pregnant women in-person and prohibits “providing abortion-inducing drugs in schools and on school grounds.” HB 140 requires that pregnant women be afforded the chance to look at an active ultrasound and listen to the fetal heartbeat before an abortion procedure.

“Today we’re taking action to protect the most vulnerable amongst us, the unborn — we are celebrating life,” the governor said during the Monday’s bill signing ceremony. “It’s a promising day, a day that will go down in our state’s history as we defend life.”

Montana’s newly enacted restrictions came on the same day that Oklahoma Gov. Kevin Stitt (R) signed a so-called “fetal heartbeat” ban on abortions (a “fetal heartbeat” can be detected as early as six weeks into a pregnancy, so this bill effectively aims to outlaw the procedure). Oklahoma’s bill similarly has no exceptions for rape or incest but does allow for abortions deemed necessary “to prevent the death of the mother or to prevent substantial or irreversible physical impairment of the mother that substantially increases the risk of death.” There’s also this, per the Oklahoman:

Under the bill, any doctor who performs an abortion after a fetal heartbeat is detected could be charged with homicide.

Stitt also signed House Bill 1102 to revoke the medical license of doctors who perform abortions that are not medically necessary to prevent “irreversible physical impairment” or death of the mother.

Many conservative states have seen a resurgence of anti-abortion laws in the last year, with some such as Arkansas explicitly stating the impetus for the measures is to get the new conservative majority on the Supreme Court of the United States to overturn the landmark Roe v. Wade decision.

“I will sign SB6 because of overwhelming legislative support and my sincere and long-held pro-life convictions,” Arkansas Gov. Asa Hutchinson said when he signed the bill last month. “SB6 is in contradiction of binding precedents of the U.S. Supreme Court, but it is the intent of the legislation to set the stage for the Supreme Court overturning current case law.”