‘We Have to Exterminate These People’: Texas Man Arrested for Election-Related Threats in Georgia 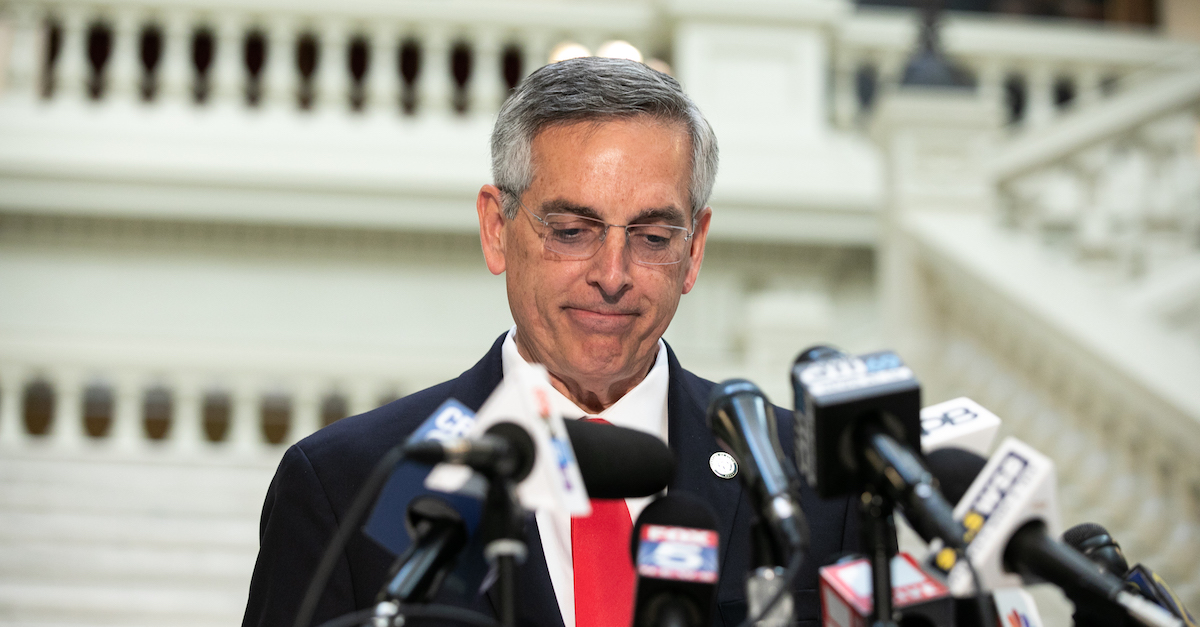 Georgia Secretary of State Ben Raffensperger holds a press conference on the status of ballot counting on Nov. 6, 2020 in Atlanta, Georgia. (Photo by Jessica McGowan/Getty Images)

A Texas man has been indicted for allegedly threatening officials in Georgia, one of the key states where former President Donald Trump went to extraordinary lengths in an attempt to reverse his 2020 election defeat.

Chad Stark, a 54-year-old from Leander, currently faces one count of an alleged interstate threat that he posted on Craigslist on Jan. 5, one day before the siege of the U.S. Capitol.

His indictment redacts the names of his alleged targets, but a person familiar with the matter told the Washington Post that they included Secretary of State Brad Raffensperger (R) and Gov. Brian Kemp (R), both vilified by Trump for rejecting his attempt to subvert the election.

Over in Atlanta on Thursday, the Fulton County District Attorney asked to open up a special purpose grand jury investigation into Trump’s antics, including his phone call urging Raffensperger to “find 11,780 votes“—the precise margin of his election loss.

According to prosecutors, Stark fulminated on Craigslist: “Georgia Patriots it’s time to kill [Official A] the Chinese agent — $10,000.”

“Georgia Patriots it’s time for us to take back our state from these Lawless treasonous traitors,” the missive began. “It’s time to invoke our Second Amendment right it’s time to put a bullet in the treasonous Chinese [Official A]. Then we work our way down to [Official B] the local and federal corrupt judges. It’s our duty as American Patriots to put an end to the lives of these traitors and take back our country by force we can no longer wait on the corrupt law enforcement in the corrupt courts. If we want our country back we have to exterminate these people.”

“Protect Those Who Administer Our Voting Systems”

The indictment, returned by a grand jury under seal on Tuesday, was unsealed following Stark’s arrest on Friday morning.

Let’s be very clear to our local law enforcement who have stood down and watch BLM antifa destroy our country and kill our citizens yet you’ll step up to stop Patriot supporters you’ll enforce face mask and you’ll close American businesses??? Remember one thing local law enforcement the key word being local. … we will find you oathbreakers and we’re going to pay your family to visit your mom your dad your brothers and sisters your children your wife. .. we’re going to make examples of traitors to our country… death to you and your communist friends.

One good loyal Patriot deer hunter in camo and a rifle can send a very clear message to these corrupt governors.. militia up Georgia it’s time to spill blood. … we need to pay a visit to [Official C] and her family as well and put a bullet her behind the ears.

“The Justice Department has a responsibility not only to protect the right to vote, but also to protect those who administer our voting systems from violence and illegal threats of violence,” Garland wrote in a statement. “The department’s Election Threats Task Force, working with partners across the country, will hold accountable those who violate federal law by using violence or threatening violence to target election workers fulfilling their public duties.”

Stark is slated to appear in the Western District of Texas this afternoon before U.S. Magistrate Judge Susan Hightower at 1:30 p.m. Central Time, before his case is transferred to the Northern District of Georgia.

Read his indictment, below: