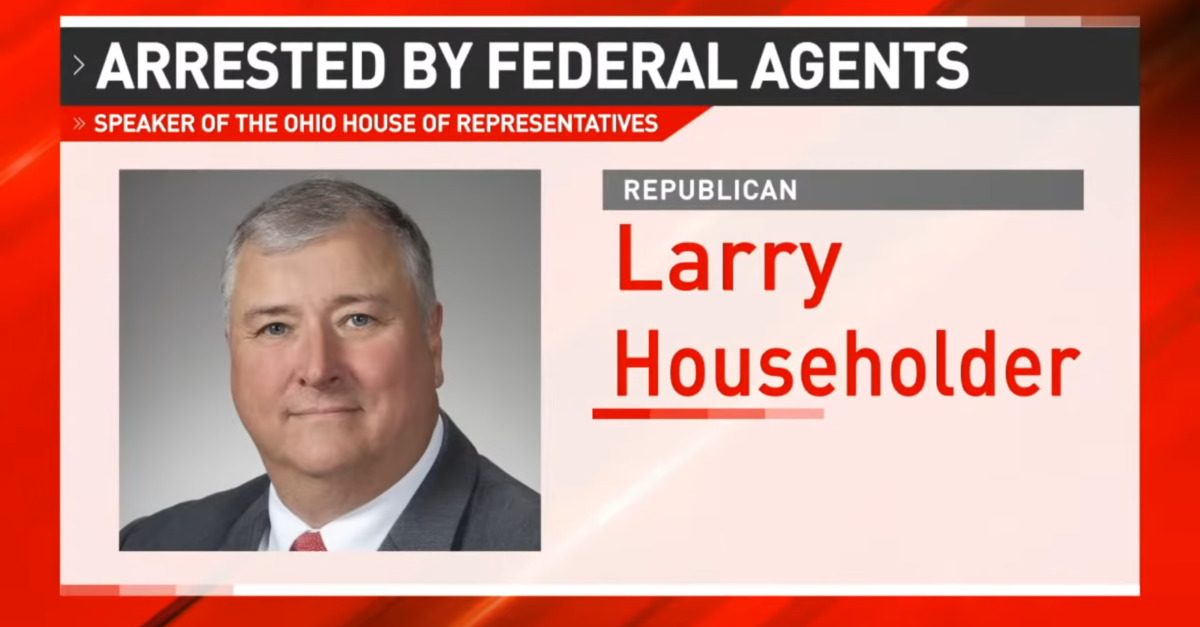 A politician who was charged with overseeing the largest illegal bribery scheme in Ohio history was easily re-elected by Ohio voters, according to initial returns that are likely to be dispositive of the eventual result.

According to The Plain Dealer, onetime Ohio House speaker Larry Householder, a Republican, was well on-track for his re-election bid on Tuesday evening.

Notably, the entrenched incumbent did not face a Democratic Party challenger in 2020. Rather, Householder was challenged in the race for the Buckeye State’s 72nd house district by four write-in candidates. Such candidates, barring a few notable exceptions, typically do not fare well in U.S. elections.

Householder’s victory, however, may prove to be one of the more mirage-like victories for the Republican Party on Election Day. Other members of the Ohio GOP–including Householder’s fellow Republicans in the lower state house–have signaled that the controversial politician’s time in office may not be a long one.

In late July, Householder was ousted from his leadership position–unanimously. The impetus behind that decision? Householder being strung up on federal racketeering charges over an alleged plot to pass a nuclear energy company bailout law that benefited the Republican Party leader and others within his clique personally.

The scandal itself centers around claims that Householder and four GOP associates took over $60 million from FirstEnergy Corp. to pad their own wallets and secure passage of legislation that would have gifted a $1.5 billion bailout for two faltering nuclear energy plants in Northern Ohio.

U.S. Attorney for the Southern District of Ohio David DeVillers previously described the Househoulder bailout scandal as “what is likely the largest bribery, money laundering scheme ever perpetrated against the people of the state of Ohio.”

The federal prosecutor went on to say that Householder and his alleged co-conspirators were intent on three major goals:

One: to line the pockets of the defendants. Two: to build a power base for Larry Householder. And three: to further this conspiracy, that is to further the affairs of this enterprise.

Householder was arrested in late July and accused of siphoning some $500,000 from the conspiratorial bailout effort in order to pay off a lawsuit, pay for his legal fees and towards a home in Florida.

“Make no mistake,” DeVillers said at the time during a press conference. “These allegations were bribery, pure and simple. This was a quid pro quo. This was pay to play.”

According to the complaint, Householder, his chief political aide Jeff Longstreth, as well as  lobbyists Matt Borges, Neil Clark, and Juan Cespedes used those alleged bribes to further the onetime speaker’s political caché and increase their own net worth by way of a “web” of dark-money groups.

House Republicans in Ohio have been keenly aware of the goings-on in the Householder legal saga.

According to the Plain Dealer, GOP leaders there are leaning toward expelling Householder from the chamber in the event that he wins re-election. Current Republican Party leadership has not moved to banish Householder already because internal rules prohibit expulsion twice for the same offense.

Householder, for his part, has consistently maintained his innocence in the federal corruption probe.