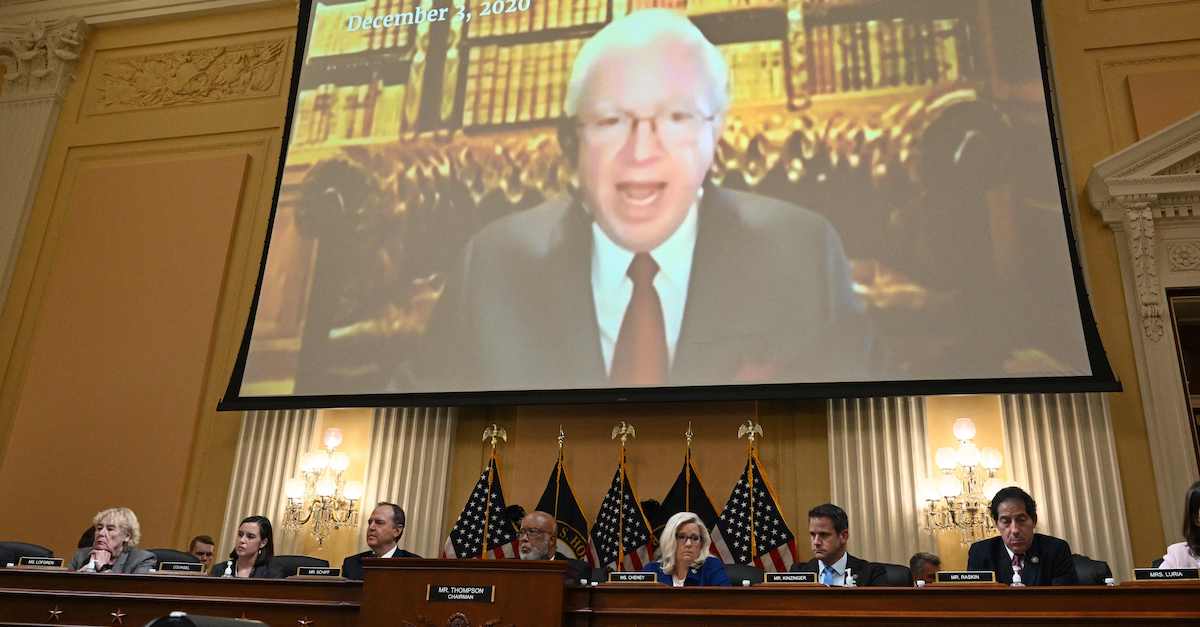 Former lawyer of former President Donald Trump, John Eastman, appears on screen during the fourth hearing by the House Select Committee to Investigate the January 6th Attack on the US Capitol in the Cannon House Office Building on June 21, 2022 in Washington, DC.

Former President Donald Trump’s post-election lawyer John Eastman is asking a federal judge in California to shield from the Jan. 6 Committee an additional 558 documents from his Chapman University email account.

In a short filing Monday, Eastman’s lawyers said they’ll produce 18 of the 576 documents requested by the committee, but they believe the remaining 558 are protected through previous orders or because they are attorney work product. Most are part of an email chain U.S. District Judge David O. Carter , who’s based in the Central District of California’s Santa Ana courthouse, previously blocked from the committee or are “very similar.”

“The few documents not falling in either of these categories are mostly clear cases of work product, e.g. a draft filing transmitted with attorney edits,” according to the brief from Charles Burnham, a lawyer with Burnham & Gorokhov PLLC in Washington, D.C.

The filing begins a briefing schedule that Judge Carter set on Sept. 15 but said could be skipped if both Eastman’s counsel and Jan. 6 Committee counsel agreed.

Just in: Judge Carter has scheduled briefing for @January6thCmte‘s request that he review a final batch of John Eastman’s @ChapmanU emails. First brief due Sept. 26, but they can skip it all if both Eastman and the #J6 committee consent. pic.twitter.com/6fsl5bqLL9

House General Counsel Douglas Letter now has until next Monday to respond to Eastman’s argument that Carter shouldn’t allow the committee to see the 558 documents.

It was Letter who initiated the current process on Sept. 14, asking Carter to privately review 572 documents the committee previously temporarily agreed not to seek. There originally were 576 documents spanning 3,236 pages, but Letter’s motion said Eastman provided four on his own accord.

Today’s brief said that number is now 18, though it doesn’t give a page length for them.

If correct, Eastman’s claim that most of the emails are part of chains Carter has already ruled private could mean few end up being released, as Eastman has previously persuaded Carter to reclassify emails he initially ordered released but were actually part of a chain with emails he’d protected. But there’s still room for big findings, and the committee’s pending reply to Eastman’s brief could reveal new information about the investigation as previous briefs have.

The new litigation is unlikely to surpass the importance of the previous email litigation before Carter, which included the veteran judge applying the crime-fraud exception to two privileged documents.

Carter’s detailed analysis in his first ruling on March 28 has drawn broad attention, particularly his finding that Eastman and Trump “more likely than not” committed obstruction of an official proceeding and conspiracy to defraud the United States by trying to derail electoral vote certification on Jan. 6. He also called their efforts “a coup in search of a legal theory” and urged action beyond his court, writing: “If the country does not commit to investigating and pursuing accountability for those responsible, the Court fears January 6 will repeat itself.”

One issue that could still be addressed: Carter never said whether he believes Trump and Eastman also committed common law fraud. The committee asked Carter to do so in early briefing, but Carter said the 11 documents he looked at when considering it don’t spread false election claims. That was in his March 28 ruling, which concerned emails and documents Eastman sent and received on his Chapman account between Jan. 4-7, 2021. The committee asked him to consider it again when reviewing the next batch of emails, but Carter’s June 7 order on those emails didn’t mention it.

Still, it’s unclear if the committee wants to pursue the common law finding: Letter said in his motion asking for the review of the final emails that he believed the issue has been fully briefed and wouldn’t need to submit anything further unless the court asked for it.

A 1998 Clinton appointee, Carter was badly injured in the Battle of Khe Sahn as a U.S. Marine during the Vietnam War in 1968, spending months in a military hospital in Guam before he was stable enough to fly home to the United States. He was a top homicide prosecutor for the Orange County District Attorney’s Office, then an influential Orange County Superior Court judge before he joined the federal bench. He ran unsuccessfully for a Democratic congressional nomination in 1986.

Carter frequently travels internationally for conferences and other United Nations, U.S. Department of Justice and Department of State judicial and counterterrorism work. Since 2015, he’s spent nearly a quarter of his time overseas, including 13 international trips over 76 days in 2019, according to his financial disclosure forms, which the Free Law Project posted online last year.