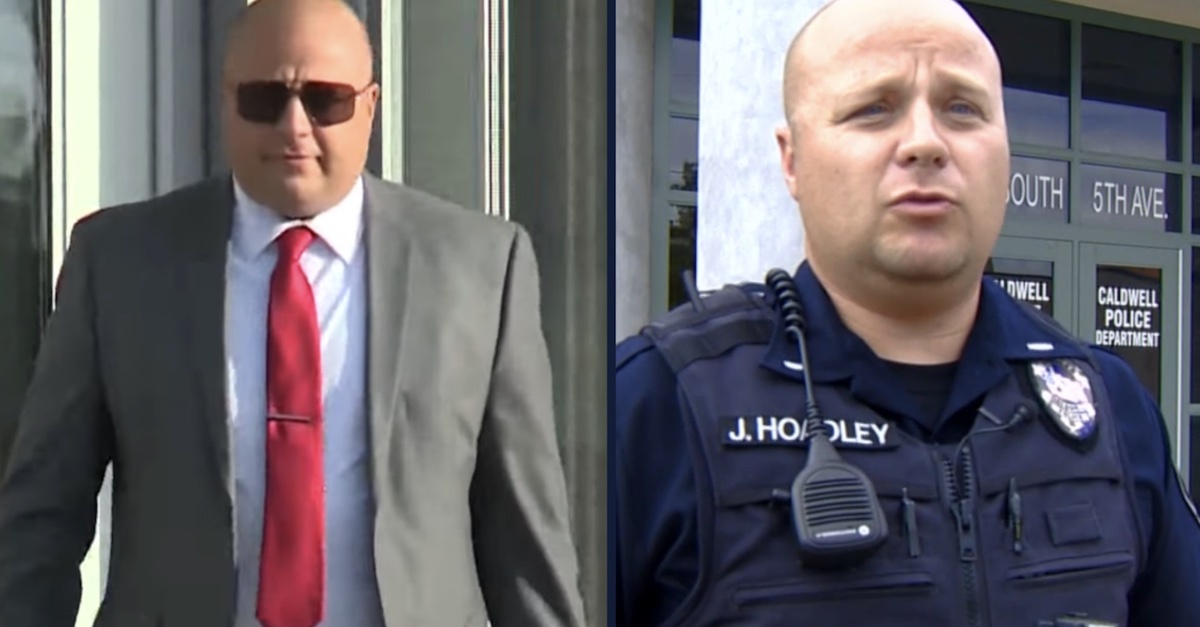 A federal jury in Boise, Idaho, on Saturday convicted a former police lieutenant of harassing a witness and tampering with evidence in an FBI civil rights investigation related to his treatment of a handcuffed man he’d arrested for marijuana possession.

Jurors acquitted Joseph Alan Hoadley, 42, of the alleged civil rights violation at the center of the case, but their three convictions for witness tampering, falsifying records and destroying records evoked tears from the former Caldwell Police Department lieutenant and his family, Boise-based NBC affiliate KTVB reported.

“This case shows that the badge is not a shield from accountability,” Idaho U.S. Attorney Joshua D. Hurwit said in a press conference Monday. “And that is how it should be.”

Hoadley was accused of striking the handcuffed man’s head and neck on March 30, 2017, then writing a report that falsely said the man was trying to escape and implying any use of force was necessary to arrest the man “and ensure officer safety,” according to his indictment. Hoadley didn’t mention the head and neck strikes, the indictment said, which are considered deadly force.

Officers within Hoadley’s own department reported their concerns to the FBI in what Hurwit said Monday was a courageous act that “exemplifies their oath.”

Joined by Caldwell Police Chief Rex Ingram, Hurwit’s press conference with other federal officials discussed the Hoadley’s convictions but also seemed to be an attempted morale boost for a department roiled by scandal and a public relations campaign promoting cooperation between local police and federal officials that can be the source of great contention in the conservative Gem State. 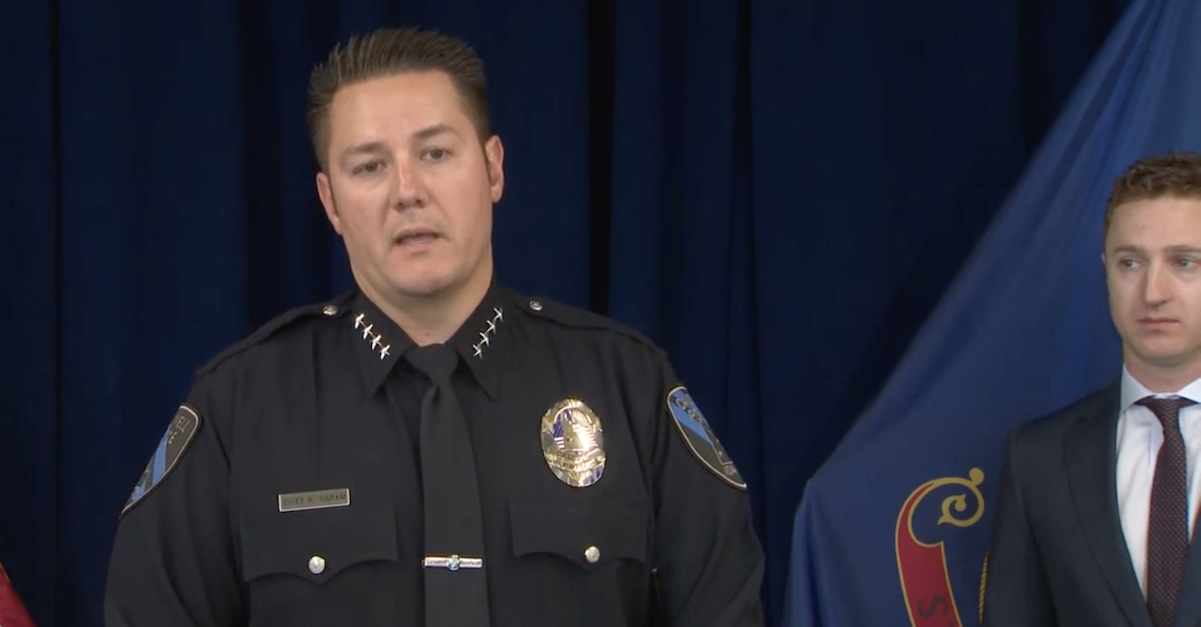 Ingram, who became top cop on July 1, said he does “have to respect Mr. Hoadley.”

“He is a father and he is a son and it’s obviously going to be very challenging for him moving froward with his conviction,” Ingram said. “But I will say, I want to reassure the public that our police department is made up of almost 100 percent of the employees who are decimated professional who do not act in the manner that Joey Hoadley was convicted of doing. I’m super proud of them.”

The chief thanked the employees who came forward and said they “have persevered and exemplified professionalism at its finest during unarguably some of the most daunting times in Idaho law enforcement history.”

Hurwit said no current Caldwell police officials are targets of an investigation but confirmed one is ongoing.

Both current and former police officials from Caldwell, which is 30 miles west of Boise, testified during the five-day trial. Several have left the department amid the FBI investigation, with former Sgt. Josh Gregory crying while testifying about leaving because of “misconduct within the department,” KTVB reported.

Former Officer Eddie Ibarra was with Hoadley the night the marijuana suspect was arrested and saw the lieutenant assault the man. He testified that Hoadley’s report didn’t match what happened, but his supervisor told him to drop it.

“It was wrong. I’m sorry, my job is to protect the people, not hit them when they’re handcuffed,” Ibarra testified, according to KTVB.

Joseph Cardwell, a current detective, also testified that he was at a conference with Hoadley when officers laughed at a video of Hoadley punching a detained man.

“I was shocked and kind of embarrassed because we’re officers of the law and to me, to have that on your phone, I didn’t want to be any part of that,” Cardwell testified. He also cried as he told jurors: “The atmosphere around CPD is kind of like a high school, unfortunately.”

Hoadley also took the stand, as did the man he arrested in 2017, identified in court documents and news reports by his initials B.H.

“BH now testifying. He says Hoadley told him he wasn’t doing a good job taking care of his mom, so he responded that Hoadley wasn’t good at being a police officer,” KTVB reporter Morgan Romero tweeted.

BH now testifying. Says Hoadley told him he wasn’t doing a good job taking care of his mom, so he responded that Hoadley wasn’t good at being a police officer. Got to the sidewalk, says Hoadley hit him in the face, which caused him to go to the ground.

“There is a very black and white line between good and bad. And to say there is a gray area and we operate in a gray area is simply inexcusable,” Ingram said. “In my opinion, there is no gray area. You either know it’s the right thing to do or the wrong thing to do.”

The chief said humans make mistakes, but in not having a system to deal with those mistakes “we slip down a slippery slope and sometimes we can’t recover from that.”

Chief Ingram said Monday the police officials who testified “did not waver.”

“You did not allow the truth to be hidden and you certainly did not like the process. It was unfortunate and it was exhausting,” Ingram said as Hurwit smiled nearby. Ingram said Monday “marks a new dawn to restoring the reputation and legitimacy that has been tarnished over the last several years.”

“There has never been a better time to be a police officer in America,” Ingram said.

Hurwit said the verdict “should build trust between the community and law enforcement, and it’s a verdict that supports the overwhelming majority of police officers in our community who do the right things the right way.”

Hoadley remains out of custody on bond. His lawyer, Chuck Peterson, could not be reached for comment on Monday. He wrote in his nine-page trial brief that “The law does not require an officer to make a perfect decision.”

“The law requires he or she act reasonably under the circumstances. That is exactly what Joseph Hoadley did,” Peterson wrote.

Read the full verdict form below:

(Images: Screenshots from KTVB and KBOI)