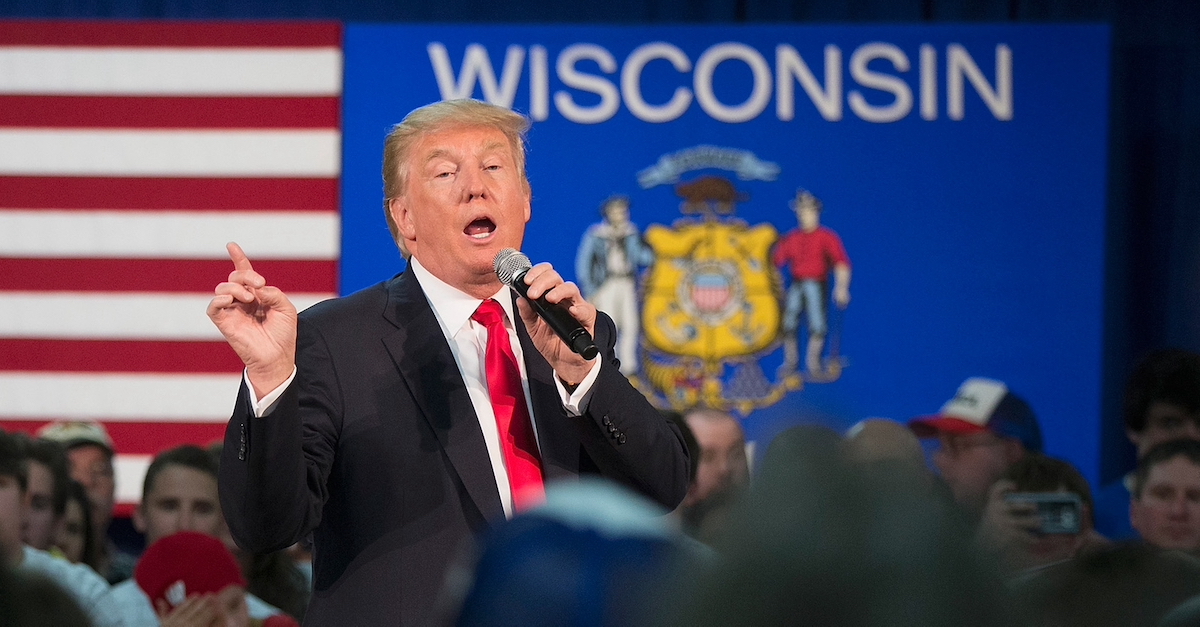 Attorneys for President Donald Trump on Wednesday filed court papers before the 7th Circuit Court of Appeals in another attempt to flip the 2020 election.

Trump lost the same lawsuit in the lower U.S. District Court for the Eastern District of Wisconsin before one of his own appointees. U.S. District Judge Brett Ludwig said in a 23-page opinion that he “allowed [Trump] the chance to make his case” but that Trump soundly “lost on the merits.”

The case, Trump v. Wisconsin Elections Commission, argues that a federal constitutional question exists because state officials exceeded their authority in the 2020 election. Trump’s lawyers described some local officials who managed Wisconsin’s elections as being “[l]ike the teenager who pushes parental limits.”

“Defendants take the view that as long as the Legislature hasn’t expressly prohibited a practice, we can get away with it,” Trump’s attorneys said while characterizing a Wisconsin Elections Commission answer to a question about whether multiple municipalities could share an absentee ballot drop box. The document goes on to argue that local and state officials “usurped the Legislature’s authority to establish absentee voting procedures.”

Defendants are state and local election officials sued in their official capacities for declaratory and injunctive relief regarding ultra vires modifications to the Legislature’s explicit directions for the manner of conducting absentee voting in Wisconsin for the presidential election. The Defendants’ “significant departure[s] from the legislative scheme for appointing Presidential electors present[] a federal constitutional question.” Bush v. Gore, 531 U.S. 98, 113 (2000) (Rehnquist, C.J., concurring).

The appellate brief accuses Wisconsin officials of “circumventing . . . safeguards” established by the state legislature and, thus, violating the U.S. Constitution, which in turn states that the presidential election may only occur in “such Manner as the Legislature may direct.” Again, from the Trump legal document:

Under Wisconsin law, Trump’s attorneys point out, voting is a constitutional right, but absentee voting is a privilege which must be carried out under the specific rules provided by state statute.

Trump’s attorneys allege that ballots which violate the first three of these four areas of concern should not have been counted and “cannot be included in the certified results of any election.”

Among the Trump arguments is that an exception to the strict requirements of the statute is available for a voter who is “indefinitely confined.” Clerks in Dane and Milwaukee counties, the centers of Trump’s Wisconsin recount efforts, encouraged the liberal use of the exception for voters who “have trouble presenting valid ID.”  Those statements were walked back, the lawsuit says, before the 2020 election and were ultimately litigated before the Wisconsin Supreme Court. However, Trump’s attorneys say 66,611 ballots were cast using the exception, which they believe — in a logical leap — raises questions about the election as a whole.

The Trump campaign slammed the Wisconsin Supreme Court’s handling of the question: “the Wisconsin state judiciary is riven by a fractured State Supreme Court that has largely decided election cases based only on threshold procedural issues and has for the most part refused to address the merits of issues that underlie this case,” Trump’s attorneys wrote. “The Wisconsin Republican Party filed that case in March concerning important issues for the August and November elections in Wisconsin, yet the Supreme Court did not reach a final decision until December 14.”

The relief requested is broad. First, Trump’s attorneys want federal judges to order declaratory relief — which basically would result in a court saying that the election must be flipped from the hands of the voters to the hands of the state legislature:

These practices and methods violated the Electors Clause [of the U.S. Constitution] because they amounted to an election conducted by executive branch officials that was not “in such Manner as the Legislature thereof may direct.” President Trump seeks a declaratory judgment that the election was not conducted in a lawful manner and therefore electoral votes cast on December 14 as a result of the flawed election are not valid, and injunctive relief ordering Governor Evers to issue a certificate of determination consistent with, and only consistent with, the appointment of electors by the Wisconsin legislature.

Following a declaration that the November 3, 2020 election was invalid, Wisconsin is not left without any electoral votes. The Electoral Count Act contains a savings provision permitting a state legislature to appoint electors in the event its state fails to make an election (or when the election was unconstitutional and void).

That provision of Electoral Count act reads as follows:

Whenever any State has held an election for the purpose of choosing electors, and has failed to make a choice on the day prescribed by law, the electors may be appointed on a subsequent day in such a manner as the legislature of such State may direct.

The key date is January 6th, when Congress determines “the validity of electoral votes” pursuant to federal statute.