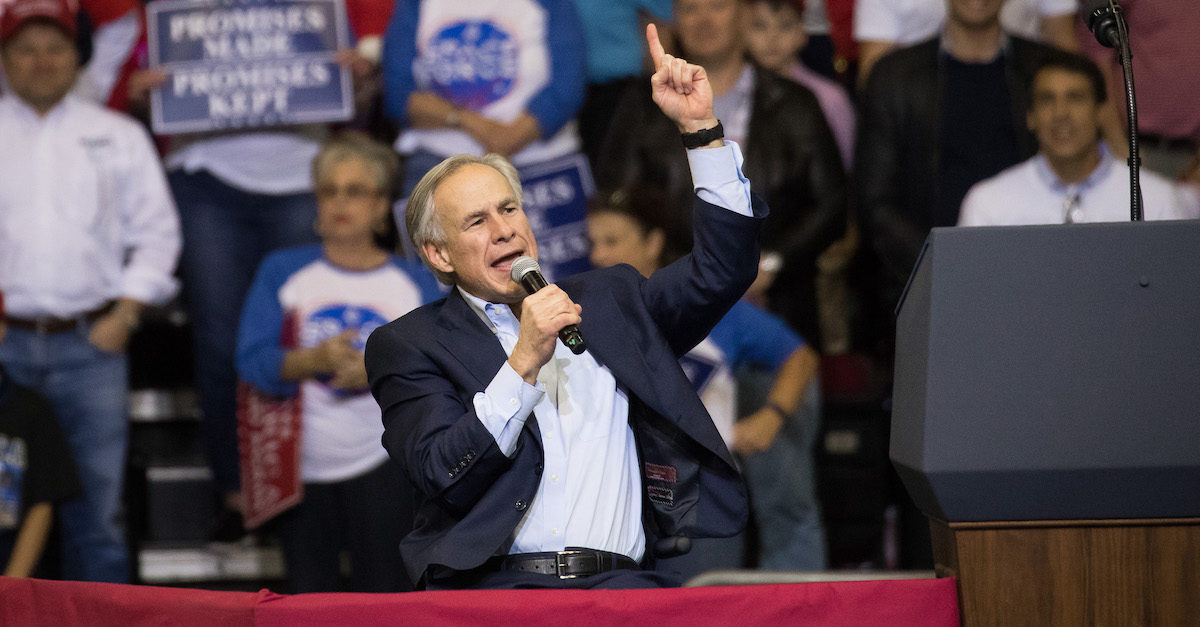 “Plaintiffs’ request for relief to protect all citizens’ right to vote and to dispel any inequality in citizens’ opportunity to cast a vote outweighs the state’s harm in facilitating any needed voter education, training, and provisions,” U.S. District Judge Jason Pulliam, whom Trump appointed in August 2019, wrote in a passionate opinion.

“The very purpose of a Bill of Rights was to withdraw certain subjects from the vicissitudes of political controversy, to place them beyond the reach of majorities and officials and to establish them as legal principles to be applied by the courts,’” Pulliam added, quoting the Supreme Court’s landmark First Amendment decision in the case of West Virginia State Board of Education v. Barnette. “One’s fundamental rights is one such liberty intended to be undeniably sacred.”

Weeks after Gov. Abbott (R) issued his executive order on July 2, the advocacy group Mi Familia Vota filed suit together with the Texas branch of the NAACP and a Latina woman Guadalupe Torres in federal court. All three claimed that Abbott’s mandate forces voters of color to choose between their right to vote and their personal safety.

Torres, a college student, and her parents have all suffered from COVID-19.

“Voters should not have to choose between protecting their health and exercising their fundamental right to vote,” Barba said in a statement. “In the midst of the COVID-19 pandemic, Governor Abbott’s exemption for voters, poll workers, and poll watchers from the mask mandate unlawfully forced voters to make that choice, and Latino and Black voters were disproportionately impacted by it. We celebrate this ruling today for all voters across the State of Texas.”

Gary Bledsoe, the president of the state’s branch of the NAACP, said that the judge’s ruling is as sound in science as it is in law.

“The judge has already been vindicated, as last night we received reports of polling officials in Texas testing positive for the coronavirus, and other polling places being required to close down because of sick poll workers,” Bledsoe said. “And, this past weekend, we received reports of poll watchers who were using their maskless presence to approach and intimidate minority voters.”

The Austin American-Statesman reported on Tuesday that coronavirus cases and hospitalizations were at their highest point in two months.

Abbott argued that shelving the exemption would create confusion at poll sites because of a shake-up in the rules close to an election.

But Judge Pulliam found that the opposite was true.

“Plaintiffs’ requested injunctive relief does not require the court to impose large-scale changes to the ongoing election process or create distinct and drastic changes to an established procedure,” the judge noted. “Any injunctive relief would simply place polling sites within the already imposed statewide mask mandate, making these public places consistent with that required in all other public settings.”

“Moreover, making polling sites subject to the statewide mask mandate will not dissuade citizens from voting due to disruption, but will provide the opportunity to vote to an otherwise burdened class,” his 35-page opinion continued.

Pulliam was clear that the court found Abbott’s mask exemption “violates Section 2 of the Voting Rights Act because it creates a discriminatory burden on Black and Latino voters.”

Abbott’s press office did not immediately respond to an email requesting comment, but the governor’s office has been dogged in fighting for restrictions that advocates denounce as politically motivated effort to make it harder for Texans to vote.

Professor Rick Hasen of the University of California, Irvine School of Law, a prominent election expert, predicted that Abbott could find some success if he pursues an appeal.

“It is a creative and interesting application of the Voting Rights Act, finding that the greater risk of COVID in African-American and Latino communities justifies a requirement that people wear masks when voting,” Hasen told Law&Crime. “I am not sure if it will stand on appeal, especially with the order coming so close to the election.”

“Local election officials warned that this last-minute injunction ‘would be a shipwreck,'” his solicitor general Kyle Hawkins wrote in a 26-page motion. “But the district court sailed ahead anyway.”