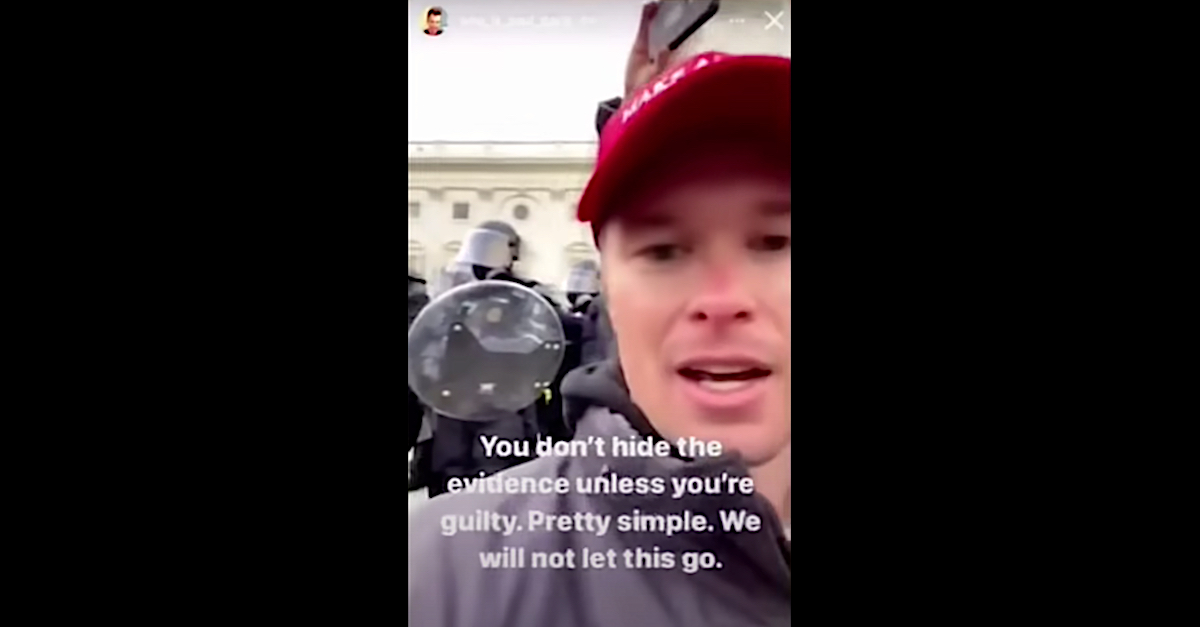 A Texas lawyer recently fired from his job at an insurance company is giving pro-Donald Trump attorneys Sidney Powell and Lin Wood a run for their money when it comes to longshot post-election litigation, despite asserting less than one week ago that his lawsuit was not like theirs.

Paul Davis, fired from his in-house counsel job one day after recording himself at the U.S. Capitol on Jan. 6, admitted in a Monday filing that critics were perhaps right “in a sense” to say that his The Lord of the Rings-themed lawsuit was “mere fantasy.” He also mentioned that he has been dogged in recent days by anything from sleep deprivation to massive sewage backups.

In case you missed it somehow, Davis argued last week in favor of the installation of a temporary government analogous to the fictional Kingdom of Gondor. In the 9-page filing on Monday, Davis, well aware of media criticism and analysis of the lawsuit’s claims and aims, complained about a sewage backup at his home, sleep deprivation, and being painted as an “extreme lunatic.” The lawyer also, in the opinion of legal commentators, unwisely discussed his behavior on Jan. 6. And that’s just the filing’s footnotes.

Davis’s lawsuit asserted that all members of the Congress were not legally seated and should, therefore, be enjoined from serving in government “forever.” In a subsequent filing, Davis referenced The Lord of the Rings and sought to have the court appoint a group of “stewards” from the cabinet of former President Donald Trump to run most of the government from the White House. According to the complaint, that should occur after the court orders the Secret Service to escort Joe Biden and his wife out of the executive residence.

In Monday’s filing, Davis concedes that his original requests were “perhaps” fantasy “in a sense,” but said such extraordinary relief was justified because some states did not require absentee voters to verify their identities in-person prior to voting in the 2020 election—which Davis believes violates the Help Americans Vote Act (HAVA).

“Perhaps the process described in the previous form of order was too heavy-handed and overly punitive,” Davis wrote. “Perhaps many of the politicians involved, including the Disputed President himself, were simply unaware of HAVA and were mere unknowing beneficiaries of an illegally-conducted election. The newly proposed ‘For the People Act’ makes that a bit difficult to believe. Nonetheless, the fact that an entire American election was conducted outside the rule of law is certainly shocking to the conscience. So, it would make sense for the remedy to be equally shocking by comparison.”

Adding that he had “struggled greatly with the question of what is an appropriate remedy,” Davis curiously decided to let the court know about his plumbing and sleeping issues, going so far as to inform the court that he was awake in the pre-dawn hours of Monday.

“Further complicating this process is Counsel’s intense amount of sleep-deprivation, having to do the work of several attorneys, mostly alone, with a skeleton staff while being plagued with threats to his safety and an apparent act of vandalism at his home where someone stuffed bundles of wood and garbage into the drain sewer at his home causing a massive sewage backup,” he wrote. “Indeed, it is now 5:21 A.M. and counsel has not slept in an attempt to get more reasonable relief in front of the Court prior to the court opening at 9:00 A.M.”

The embattled Davis also took issue with how he was being portrayed in the media, providing a seemingly incriminating explanation about his presence at the Capitol on Jan. 6.

Likely, media merely assumed, without reviewing the Complaint, that the lawsuit sought to reinstall President Trump because undersigned counsel was the victim of a ‘Twitter Mob’ where a video was selectively edited and words twisted out of the context, which showed clear contrary intent, in order to claim the Mr. Davis’swords [sic] ‘trying to get into the Capitol, meant according to [Salon journalist Roger] Sollenberger’s tweet, to ‘storm[ ] the capitol in an attempt to stage a coup against the US government,’ a preposterous assertion, if viewed in the context of the rest of the video.

“Indeed, ‘get into the Capitol’ can have more than one meaning, including, as Mr. Davis intended, asking Capitol police to allow him to get within earshot of Congressmen to make his voice heard after he had been daily telephoning and emailing to request a true audit of ballots and tabulating machines to ensure election integrity. To be clear, Mr. Davis had no violent intent, and only voted for Mr. Trump because he views him as an outsider and not inherently tainted by a life in corrupt politics and further views his policies as good for common, everyday Americans as opposed to elites, and not for any other reason.”

The Davis statement did not say that he entered the Capitol, but did suggest he tried to coax police to let him in. He also said he did not have “violent intent” that day, but did “want to get within earshot of congressmen to make his voice heard […] to request a true audit of ballots and tabulating machines to ensure election integrity.”

Though Davis has not been charged, some defendants who have been charged, including fellow Texan Jenna Ryan, have attempted to remove blame from themselves by saying police allowed them to enter the Capitol. Violent intent is also not necessary to be hit with charges in relation to the events of Jan. 6. 18 U.S. Code § 1752, the statue Ryan was charged under, says whoever does the following commits a crime:

Read the full memo below:

Latinos for Trump Filing by Law&Crime on Scribd