‘Respect the Will of the People’: Democratic AGs Call Out Bill Barr for DOJ’s ‘Un-American’ Election Interference 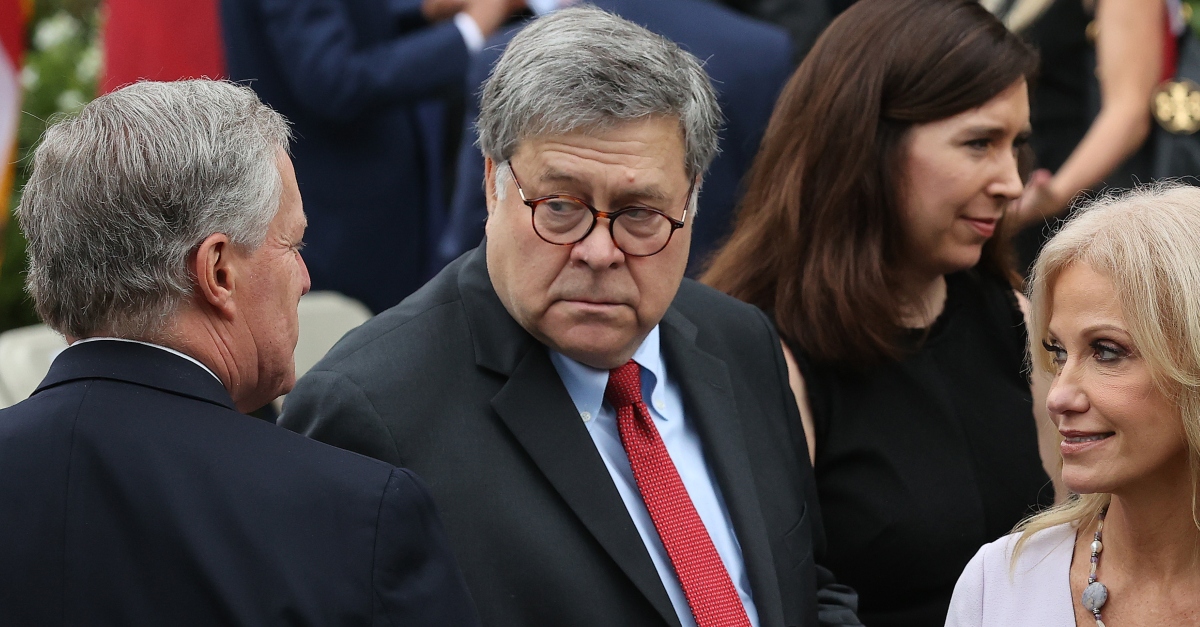 “This troubling last-minute policy change, which caused the director of the Election Crimes Branch of the U.S. Department of Justice to resign from his supervisory role, is wrong,” said Wisconsin Attorney General Josh Kaul (D) in a press release accompanying an open letter making the plea. “For no apparent reason other than to indulge the outgoing president’s baseless attacks on the integrity of the election, AG Barr has further undermined USDOJ’s [sic] independence.”

Before Barr issued the memo there was no evidence of any such fraud occurring. Since Barr’s memo was released—and largely panned as a dangerous and unfortunate vote of confidence in President Donald Trump’s increasingly failing efforts to overturn his loss to Joe Biden—multiple allegations of fraud have withered under the slightest amount of scrutiny and judicial questioning.

“The 2020 election is over, and the people of the United States have decisively chosen a new President,” the brief letter reads. “It is in this context that we express our deep concerns.”

The document sets out the stakes:

[W]e are alarmed by your reversal of long-standing DOJ policy that has served to facilitate that function without allowing it to interfere with election results or create the appearance of political involvement in elections. Your directive to U.S. Attorneys this week threatens to upset that critical balance, with potentially corrosive effects on the electoral processes at the heart of our democracy.

“State and local officials conduct our elections,” the letter goes on. “Enforcement of the election laws falls primarily to the states and their subdivisions. If there has been fraud in the electoral process, the perpetrators should be brought to justice. We are committed to helping to do so. But, so far, no plausible allegations of widespread misconduct have arisen that would either impact the outcome in any state or warrant a change in DOJ policy.”

“This policy reversal is nothing more than a last-ditch effort by a lame-duck administration to desperately latch on to power and sow chaos in our electoral process,” she said. “This election was fair and safe, and even another branch of the Trump Administration has now publicly stated that this election was ‘the most secure in American history.’ The president and Attorney General Barr’s attempts to divide Americans and instill doubt in our elections is un-American and will not go unchallenged.”

The attorneys general note that Barr’s memo is an “abrupt change” that runs counter to 40 years of precedent within the DOJ that prohibited the agency from casting an askance eye at state election results “without adhering to long-established, important guardrails.” All that’s gone now, several legal experts said, due to an obvious attempt by Attorney General Barr to placate the mercurial tantrums of a sore, defeated executive and to shore up distrust in the infrastructure of the country’s electoral system among his most faithful and stalwart political admirers and hangers-on.

“This reversal of departmental policy will erode the public’s confidence in the election,” the letter says. “While we are confident any such investigations will not succeed in overturning the election’s outcome, we believe that using the Department of Justice to stoke these efforts will come at the terrible cost of undermining trust in the democratic institutions on which this country depends.”

Notably, the letter is drawn on the letterhead of progressive Minnesota Attorney General Keith Ellison (DFL) and only contains the names and signatures of other Democratic Party attorneys general. No Republicans signed on to the criticism of Barr’s alleged court jester act for the lame duck Trump presidency.

“The people of the United States have spoken,” the letter concludes. “The U.S. Department of Justice should not interfere with their choice, nor should it undermine confidence in the electoral process. We ask that you respect the will of the people and reverse your decision promptly.”

Later on Friday, it was reported that more than a dozen federal prosecutors came up with no “substantial” voting irregularities and asked Barr to rescind his controversial memo.