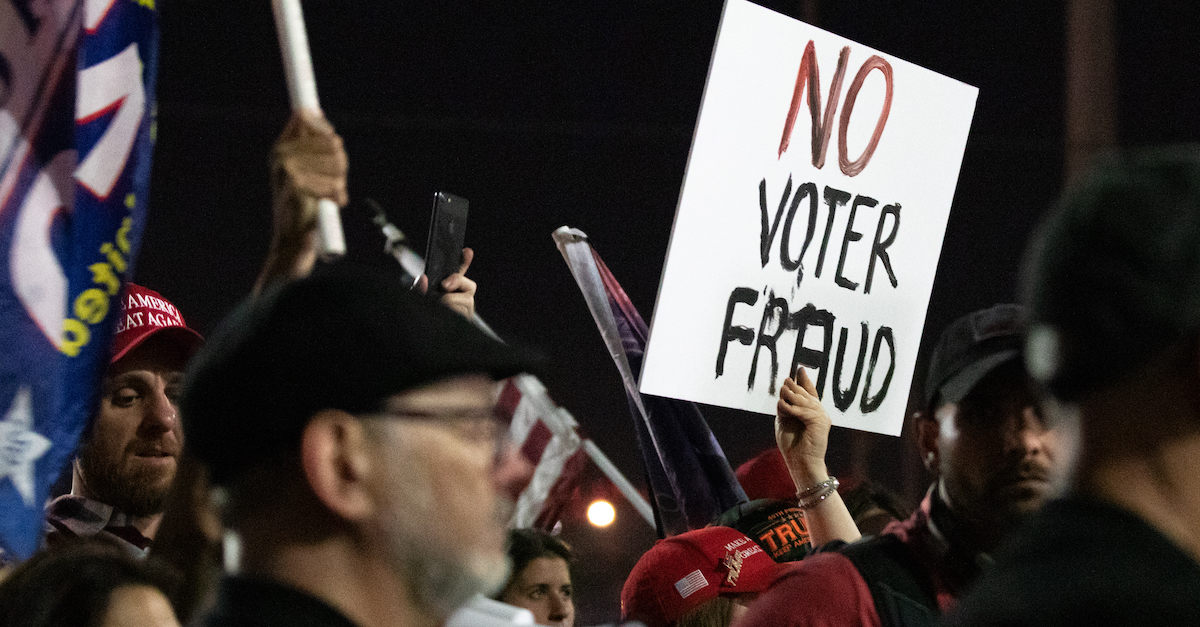 The morning after a brutal hearing in which a lawyer for outgoing President Donald Trump’s campaign distanced himself from voter fraud allegations, the legal team hastily declared its case moot.

“Since the close of yesterday’s hearing, the tabulation of votes statewide has rendered unnecessary a judicial ruling as to the presidential electors,” Trump campaign’s lawyer Kory Langhofer wrote in a brief notice to Judge Daniel Kiley, from Arizona’s Maricopa County, on Friday.

The campaign continues to bitter-end their courtroom battle downballot, where they claim to have a fighting chance in a board of supervisors race and the state senate.

The writing had been on the wall after Arizona’s Secretary of State Katie Hobbs submitted a handy chart showing Trump far out of reach of President-elect Joe Biden‘s commanding 11,414-vote lead in the Grand Canyon State with less than 200 ballots being contested in the litigation.

The move followed a day of embarrassing stumbles in a case that began as a way to test Republicans’ baseless “Sharpiegate” conspiracy theory in court.

During the morning session of the 9:30 a.m. hearing on Thursday, Langhofer unsuccessfully tried to admit hundreds of affidavits delivered to them through an online form created after the election. Langhofer conceded that he did not authenticate the statements, but he insisted that the court could trust their reliability because the affiants had to use a CAPTCHA, which weeded out the bots. But the campaign acknowledged that their investigation showed that some of the affidavits contained obviously false statements and “spam.”

“This is concerning,” Judge Kiley remarked earlier in the day, blocking the admission of the so-called evidence.

Emphasizing the remarkable disconnect between the Trump campaign’s public rhetoric and their remarks in court, Langhofer walked back the complaint’s portrait of a vast Grand Canyon State conspiracy to disenfranchise the president’s supporters through a sinister use of Sharpies.

“This is not a fraud case,” Langhofer said, remarkably off-message with the White House. “It is not a stealing-the-election case.”

Things got no easier for the Trump campaign in the afternoon session, when Maricopa County’s Director of Election Day and Emergency Voting Scott Jarrett further debunked the conspiracy theory that election workers in Arizona handed out markers to Trump supporters to invalidate their votes.

Markers bleeding through a ballot did not lead to overvotes, Jarrett confirmed, using the term for when a voter casts a ballot for more than the maximum allowable number of candidates. Jarrett testified that this happened in the 2020 election mostly with 19 candidates for judges, not presidential candidates, and Arizona Attorney General Mark Brnovich, a Republican, found no evidence of voter disenfranchisement.

Arizona only found 191 overvotes in the race for the White House.

After an evidentiary shellacking on the issue, even Langhofer abandoned the Sharpie issue. He objected to cross-examination of witnesses about the issue on grounds of relevance, saying that it would not be part of his closing arguments. Judge Kiley overruled that objection: The questions were relevant because the witnesses spoke about the issue in their affidavits, and the Trump campaign detailed it in their lawsuit.

The Trump campaign’s parade of witnesses hardly bolstered their case.

When pressed by the Arizona Democratic Party’s counsel Daniel Arellano, each of the witnesses in turn conceded they did not know whether their vote was counted.

“Do you have any basis to believe your vote wasn’t counted?” Arellano asked voter Mia Barcello.

“Uh, I’m not sure,” Barcello replied with a laugh.

When pressed about it further, Barcello replied: “No.”

Ms. Barcello had plenty of company, with another witness responding “I couldn’t say” to the same inquiry and another replying “That’s correct” when asked if he did not know one way or another whether his vote was counted, a matter that could have been quickly settled by consulting the public record.

“I don’t know whether they were counted or not,” Swoboda said, adding that she could speak to voters’ “beliefs” but otherwise had “no way of knowing” whether or not that was true.

Testimony by the Trump campaign’s witness took a turn to the absurd when Zack Alcyone, whose business bio boasts of his experience in “ballot access calculations,” conceded that he is the business partner of Langhofer, the lawyer who argued the president’s case all day. The website of the Phoenix-based software company Signafide lists them as co-founders.

Sarah Gonski, another lawyer for the Arizona Democratic Party, marveled at the changing theories advanced by the Republicans.

“Your honor, it’s not exactly clear what they’re asking for because it’s been a moving target,” Gonski noted, pointing theories about Sharpies, overvotes and a green button.