The Pennsylvania Attorney General’s Office responded on Wednesday to yet another attempt by the Trump campaign to air its election grievances in the hallowed virtual halls of the Supreme Court of the United States. Attorney General Josh Shapiro (D) opposed President Donald Trump’s motion for expedited consideration of a petition of certiorari, calling that motion “profoundly incoherent.”

The Trump campaign and its allies have gotten nowhere as far as post-election litigation is concerned, whether in state courts across the land or any level of the federal courts—especially the Supreme Court. But President Trump has repeatedly said he has “JUST BEGUN TO FIGHT,” perhaps referencing a quote attributed to John Paul Jones.

Attorney General Shapiro and his office noted, at length, that the president’s campaign and Republican allies have tried and failed several times to get the high court’s ear. The latest effort, the Commonwealth argued, is “similarly lacking in merit”:

This action follows on the heels of a series of attempts to have this Court disenfranchise large swaths of Pennsylvania’s electorate, or otherwise disqualify all of Pennsylvania’s voters. See Republican Party of Pennsylvania v. Kathy Boockvar, Secretary of Pennsylvania, 20-542; Joseph B. Scarnati, III v. Pennsylvania Democratic Party, 20A53; Mike Kelly v. Pennsylvania, 22A98; Texas v. Pennsylvania, 22O155. In one of these cases filed before the election, this Court specifically denied a motion for expedited consideration, in part, because there was simply not enough time to decide the case before Election Day. Republican Party of Pennsylvania v. Boockvar, No. 20-542, 592 U.S. ___, ___ S.Ct.___, 2020 WL 6304626, at *2 (Oct. 28, 2020) (Alito, J., statement). This latest attempt by the Trump Campaign to compel expedited review of its petition in an effort to overturn the results of the November 3, 2020 presidential election, now seven-weeks in the past, is similarly lacking in merit, and is devoid of any urgency.

Pennsylvania said it was “profoundly incoherent” to argue that the Supreme Court’s rejections of Ken Paxton’s and Rep. Mike Kelly’s lawsuits somehow made the Trump campaign’s claims about a pre-election Pennsylvania Supreme Court decision ripe for relief. 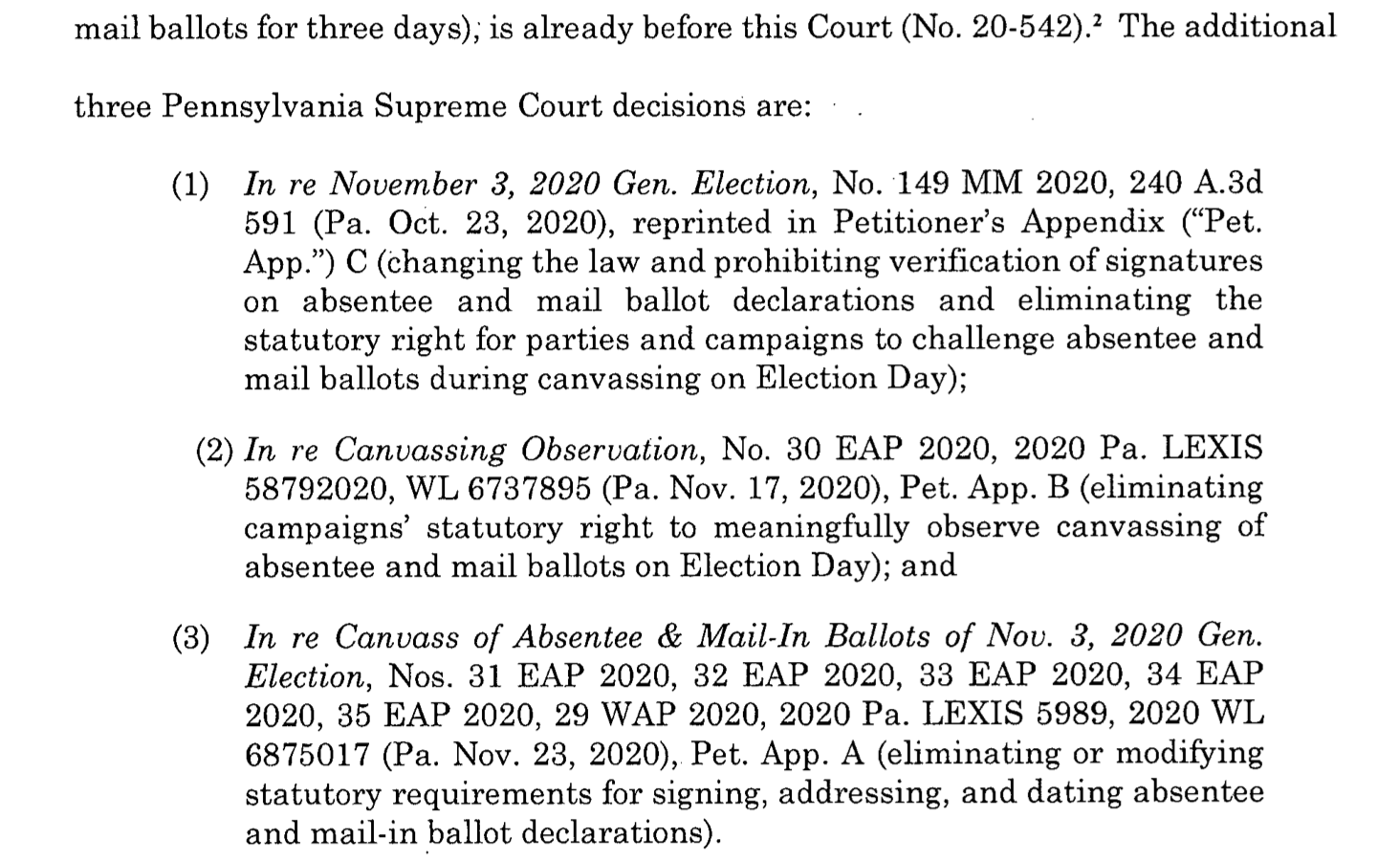 In a footnote after the Bush v. Gore citation above, the Trump campaign petition, indeed, said the campaign’s “need for relief did not fully ripen” until the Supreme Court denied the Paxton and Kelly suits.

“On October 23, 2020, the Pennsylvania Supreme Court determined that nothing in the plain language of Pennsylvania’s Election Code compels or allows a county board of elections to disqualify a mail-in ballot based on a signature analysis of a voter’s mail-in ballot declaration,” Shapiro’s filing said. “Instead of moving expeditiously, as it now claims circumstances require, the Trump Campaign waited until Sunday, December 20 to file the present petition for writ of certiorari and motion to expedite. That is more than eight weeks after the Pennsylvania Supreme Court’s decision and seven weeks after Election Day. The Trump Campaign’s own conduct belies any claim of emergency that now compels or supports expedited consideration.”

From here, the Pennsylvania AG turned to a quote on “insanity,” which the late Justice Antonin Scalia wrote in a dissent in Sykes v. United States.

“As Justice Scalia once observed, ‘[i]nsanity, it has been said, is doing the same thing over and over again, but expecting different results. Four times is enough,'” the Commonwealth said, asking SCOTUS to reject the Trump campaign’s bid to “have this Court anoint the next President of the United States” by disenfranchising Pennsylvania voters.

In closing, the Commonwealth hit the Trump campaign and Republican lawmakers who are hyping Jan. 6 as a day of reckoning by wildly asserting that Vice President Mike Pence has “exclusive authority and sole discretion in determining which electoral votes to count for a given state.” Pennsylvania noted that there are no “alternative electors,” a possible reference to “alternative facts.”

“The Trump Campaign may seek refuge by constructing an alternative reality with alternative electors, but this Court should not indulge that effort. In courts of law, facts, evidentiary standards, legal doctrines, and the constitutionally prescribed method for electing the President of the United States are fundamental. As is deference to the will of the voters,” the filing concluded. “Pennsylvania voters have made their choice for President, and that choice was ratified by the only Electoral College that actually exists.”