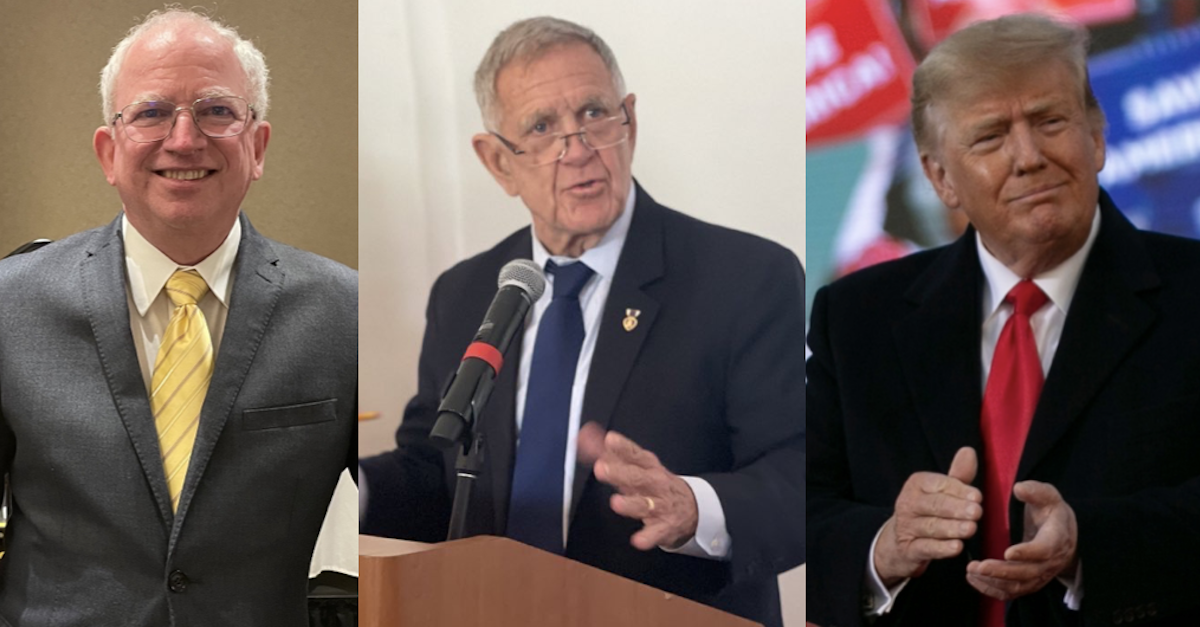 The 9th Circuit U.S. Court of Appeals could act this week on John Eastman’s appeal of a California federal judge’s order that he disclose more Chapman University emails to the Jan. 6 Committee, emails which the judge ruled show a criminal effort to obstruct election proceedings and defraud the United States through false voter fraud information in the battleground state of Georgia.

A clerk on Saturday gave the committee until Tuesday to respond to a request from Eastman’s lawyers to stay U.S. District Judge David O. Carter’s Oct. 19 order while the court considers the full appeal, which Eastman said also will challenge the judge’s two previous crime-fraud findings from March and June.

“Instead of honoring that request, counsel for the Select Committee notified Dr. Eastman’s counsel at 6:26 pm PDT and 6:40 pm PDT that the Select Committee had ‘downloaded and examined’ the disputed documents, falsely asserting that there was no motion for stay pending before the Ninth Circuit at the time,” according to the nine-page motion.

“As a consequence of their having already downloaded and examined the eight disputed documents, the Select Committee has asserted that the dispute is now moot,” according to the motion. “Dr. Eastman disagrees. If, on appeal, this Court holds that the district court’s crime-fraud ruling was erroneous, those privileged documents should not have been ordered produced to, and examined by, the Select Committee.”

The motion acknowledges that a “stay barring the production is no longer available” but asks that the Jan. 6 Committee be ordered to return or destroy the eight documents, and that the committee be barred from further use of them pending the appeal.

Eastman’s appeal comes seven months after Carter first ruled that the legal concept known as the crime-fraud exception applies to emails from Eastman’s Chapman University account that qualify as privileged attorney work product or client communications. The initial March 28 order drew broad attention for the judge’s findings that Eastman and Trump “more likely than not” attempted to obstruct an official proceeding and conspired to defraud the United States by trying to derail Congress’s Jan. 6, 2021, certification of the electoral vote.

But while Carter ordered 101 emails and documents disclosed, he applied the crime-fraud exception to only one: a draft memo the judge said “may have been the first time members of President Trump’s team transformed a legal interpretation of the Electoral Count Act into a day-by-day plan of action.” The judge’s June 7 order reiterated the crime-fraud finding and ordered 159 emails and documents disclosed, though it was later reduced to 149. But he again applied the exception to only one document: a Dec. 22, 2020, email in which an attorney not identified in the ruling concluded that a loss in court would “tank the January 6 strategy” and encouraged avoiding the courts altogether.

The order that prompted the appeal, however, went much further, ordering only 33 of 562 emails and documents to be disclosed but applying the crime-fraud exception to eight that the judge said were privileged. That incudes two that the June 7 order were a “close call” but ultimately didn’t need to be disclosed: Carter said he changed his mind after reading additional related emails from the final batch the committee asked him to review on Sept. 14.

“Additional context now before the Court, particularly with respect to Georgia, confirms that those emails fall within the ambit of the crime-fraud exception,” Carter wrote.

The order led to Trump specifically questioning Carter in post on Truth Social, writing on Oct. 20: “Who’s this Clinton appointed ‘Judge,’ David Carter, who keeps saying, and sending to all, very nasty, wrong, and ill-informed statements about me on rulings, or a case (whatever!), currently going on in California, that I know nothing about — nor am I represented.”

“With that being said, please explain to this partisan hack that the Presidential Election of 2020 was Rigged and Stolen. Also, he shouldn’t be making statements about me until he understands the facts, which he doesn’t,” Trump wrote.

Carter’s ruling wasn’t a total loss for Eastman and Trump, however. He said 18 newly reviewed documents present the same “close call” he described in the June 7 order and chose not to order them disclosed. While the judge said the documents are “sufficiently related to disrupting the January 6 vote,” he said he couldn’t conclude that they “furthered the obstruction of the January 6 proceedings.”

Four documents, however, involve Eastman and the other attorneys suggesting “that—irrespective of the merits—the primary goal of filing is to delay or otherwise disrupt the January 6 vote.” That includes one in which the attorneys say that merely having their lawsuit with the U.S. Supreme Court “not ruled on, might be enough to delay consideration of Georgia.”

“This email, read in context with other documents in this review, make clear that President Trump filed certain lawsuits not to obtain legal relief, but to disrupt or delay the January 6 congressional proceedings through the courts,” Carter wrote.

Four additional emails, Carter said, “demonstrate an effort by President Trump and his attorneys to press false claims in federal court for the purpose of delaying the January 6 vote.”

“The evidence confirms that this effort was undertaken in at least one lawsuit filed in Georgia,” Carter wrote.

The specific numbers were cited in a Dec. 4, 2020, state court action in Georgia, with Trump’s lawyers alleging hotly contested Fulton County “improperly counted a number of votes including 10,315 deceased people, 2,560 felons, and 2,423 unregistered voters.” But when they moved to contest the state proceeding in federal court, Eastman said Trump “has since been made aware that some of the allegations (and evidence proffered by the experts) has been inaccurate. For him to sign a new verification with that knowledge (and incorporation by reference) would not be accurate.”

It isn’t the first time emails in Carter’s case have revealed Eastman’s reluctance in some areas of Trump’s election pushback, with Eastman telling one supporter in a Dec. 18, 2020, email, “No to martial law as well. I will not be associated with any such effort. And again, I implore you not to advance it either.”

But in the Georgia situation, despite Eastman’s statement that Trump knew some of the allegations were inaccurate, “President Trump and his attorneys ultimately filed the complaint with the same inaccurate numbers without rectifying, clarifying, or otherwise changing them,” Carter wrote. “President Trump, moreover, signed a verification swearing under oath that the incorporated, inaccurate numbers ‘are true and correct’ or ‘believed to be true and correct’ to the best of his knowledge and belief.”

Carter ordered Eastman to give the 33 documents to the committee by 2 p.m. Pacific time on Friday, but Eastman does not appear to have done so because he is appealing to the 9th Circuit. He first filed a motion for reconsideration with Carter that said additional documents “clearly show that no false information was knowingly submitted by the President or his attorneys, and that the complaint was not filed for an improper purpose.” Carter rejected the motion Friday afternoon, after Eastman filed his emergency motion noting the 2 p.m. deadline and the judge’s inaction.

Eastman asked the 9th Circuit to grant an emergency stay halting Carter’s order regarding the eight privileged emails as the court considers the full appeal. The 13-page motion, signed by Eastman’s lawyer Charles Burnham, specifies that Eastman’s stay request and appeal regards Carter’s crime-fraud exception finding for the eight privileged emails, not the 25 other documents. Nor will Eastman be appealing Carter’s full March and June orders, but he is appealing the crime-fraud exception findings for the single documents in each, even though the committee has had both for months.

“Although the production of those two documents has likely mooted the claim of privilege itself, the district court’s crime-fraud holding likely has ‘collateral consequences’ that would not moot an appeal of that holding,” according to the motion, quoting the 1968 U.S. Supreme Court ruling Carafas v. LaVallee.

The stay motion says the sealed affidavit Eastman submitted to Carter “provides critical context for the emails at issue.” Carter’s six-page order on Friday said the affidavit didn’t change his views, but Eastman told the 9th Circuit that it shows “the district court’s crime-fraud ruling is clearly erroneous.”

It’s unclear which 9th Circuit judges will consider Eastman’s stay request, but it could be a separate three-judge panel than the panel that considers the full appeal.

Last year, a three-judge panel vacated a rare injunction Carter issued in an unrelated case that called for the City of Los Angeles to offer housing to everyone living in the city’s notorious Skid Row area, saying the judge had “impermissibly resorted to independent research and extra-record evidence” and that his power “must be exercised consistent with its discretionary authority and Article III.”

The 9th Circuit currently is considering another unusual appellate jurisdictional issue in that case regarding a settlement Carter approved in June that cleared the way for a new anti-camping ordinance the city of Los Angeles is enforcing against unhoused people.

A 1999 Bill Clinton appointee, Carter has acknowledged the limits of his powers in Eastman’s Chapman emails case, writing in the March 28 order, “The Court is tasked only with deciding a dispute over a handful of emails. This is not a criminal prosecution; this is not even a civil liability suit.”

But the order also cited news articles not part of the official court record, and it included a patriotic call to action that warned: “If Dr. Eastman and President Trump’s plan had worked, it would have permanently ended the peaceful transition of power, undermining American democracy and the Constitution. If the country does not commit to investigating and pursuing accountability for those responsible, the Court fears January 6 will repeat itself.”

Read Eastman’s full motion for an emergency stay from the 9th Circuit here.

Read the full motion over the Jan. 6 Committee accessing the documents here.