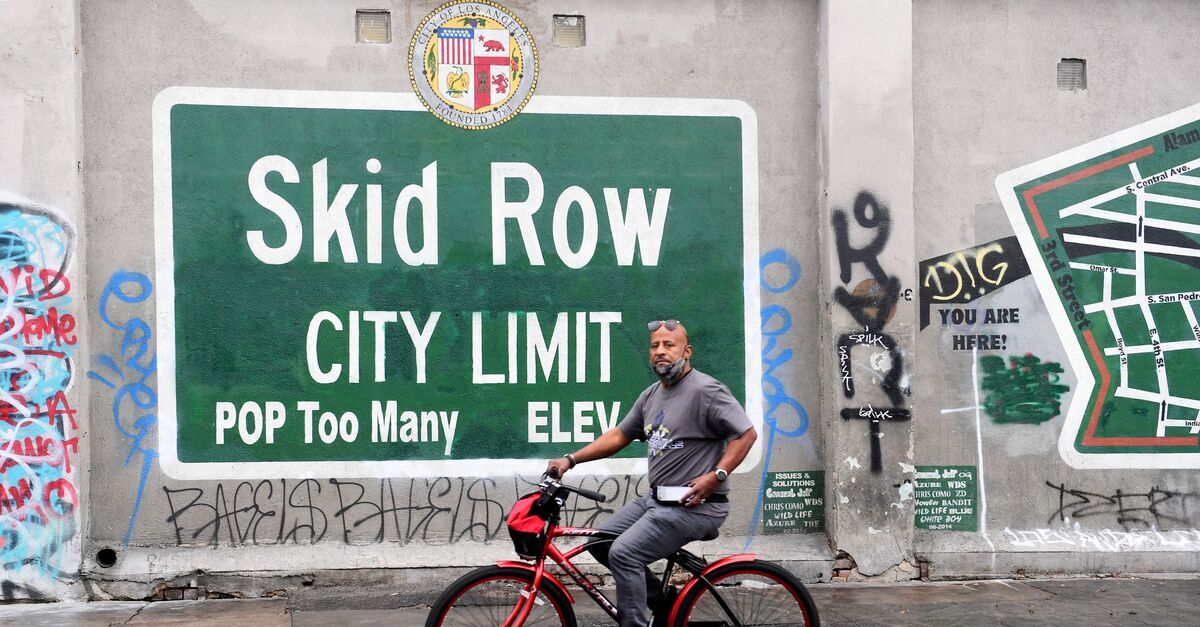 A cyclist rides past a Skid Row sign in Los Angeles, California on February 1, 2021. – The federal judge overseeing attempts to resolve the homeless situation has called for an urgent meeting to discuss worsening conditions and the poor official response. Combined now with the coronaviruspandemic and worsening mental health and substance abuse issues, US District Judge David Carter who toured Skid Row last week likened the situation to “a significant natural disaster in Southern California with no end in sight.”

A federal court on Tuesday issued a sweeping order in an extraordinary and novel effort to combat the unchecked state of homelessness in the City and County of Los Angeles, California.

“This Court cannot idly bear witness to preventable deaths,” U.S. District Judge David O. Carter writes in the injunction. “This ever-worsening public health and safety emergency demands immediate, life-saving action. The City and County of Los Angeles have shown themselves to be unable or unwilling to devise effective solutions to L.A.’s homelessness crisis…the Court must now do so.”

In early March, the LA Alliance for Human Rights sued Los Angeles and several county officials alleging myriad violations of state and federal law. In their complaint, they said the county should be legally mandated to provide shelter and other forms of state intervention that will reshape the landscape of the problem–often targeting individuals holistically. That is, the plaintiffs asked for a lot.

And that’s exactly what they received from the district court in the massive, 110-page order that aims to all-but completely re-imagine how Los Angeles deals with its homeless population.

Carter’s order aims to more or less commandeer $1 billion recently allocated by Los Angeles Mayor Eric Garcetti to combat homelessness by forcing those funds into escrow “with funding streams accounted for and reported to the Court within 7 days.” Various audits of multiple preexisting funds are also mandated by the order with 30- and 90-day timelines that “must be completed by independent auditors and investigators.”

The purpose of keeping tabs on all of this money is to, eventually, construct and provide shelter to the tens of thousands of people currently without housing in Los Angeles.

And the court may get creative with housing construction.

“Within 30 days, City Controller Ron Galperin shall oversee the creation of a report on all land potentially available within each district for housing and sheltering the homeless of each district,” the order mandates–before musing: “The homeless have been left no other place to turn to but our beaches, parks, libraries, and sidewalks, and it is pivotal that they no longer rely on spaces that enhance quality of life for all citizens.”

And, in the meantime, officials are not allowed to sell off any state-owned lands that might be suitable for building new housing.

Among the 15-plus mandatory actions that city and county officials must take in short order is an admonishment for authorities to account for their own inaction on the discrete issue of homelessness in the City of Angels.

“Mayor Garcetti, the Los Angeles City Council, and Hilda Solis, Chair of the County Board of Supervisors, shall submit a report to the Court by April 27, 2021 at 8:00 a.m. to explain why an emergency declaration has not been issued,” Carter ordered.

In fact, the order is so detailed and carves out so much power for the judiciary, that the Bill Clinton-appointed judge felt the need to explain how, exactly, he is able to go above and beyond even what the plaintiffs originally requested in their lawsuit against the county.

“A district court may order injunctive relief on its own motion and is not restricted to ordering the relief requested by a party,” the order notes–citing the relevant precedent and legal reasoning.

Much of that discussion (and most of the 60ish-page introduction) is focused on the United States’ legacy of systemic racism.

“The Court today addresses decades of racial discrimination that have culminated in a Los Angeles homelessness crisis with a significant loss of life and deprivation of humanity—peaking at 1,383 deaths just last year,” Carter notes at one point.

“I want to be very clear that homelessness is a byproduct of racism,” stated LAHSA’s Heidi Marston. Racial discrimination and homelessness are interconnected issues going back decades into the history of Los Angeles. Beginning with the City of Los Angeles’s decision to raze houses, resulting in an increased number homeless low-income people of color in the 1910s, continuing through state enforcement of racially restrictive covenants throughout Los Angeles in the 1930s, and postwar policies related to redlining, racial covenants, and public bank lending—over a century of racist policies have disproportionately impacted L.A.’s unhoused Black population. “We continue to see that Black people are overrepresented in our homeless population, and that Black African Americans are four times more likely to become homeless than their white counterparts.”

But, the judge notes, the problem goes back quite a bit further than racist policies of the 20th century alone.

“In the ebb of afternoon sunlight, young Americans looked at their former compatriots as adversaries as they advanced towards them,” Carter writes in the opening paragraph of his opinion with a keen eye toward the future and the past.

“Young teenagers carried battle flags to rally upon in the chaos that would soon ensue,” he continues. “There is nothing free about freedom. It is borne from immense pain, suffering, and sacrifice. Our country has struggled since the Emancipation Proclamation to right the evil of slavery.”

Those lines were a direct reference to the U.S. Civil War.