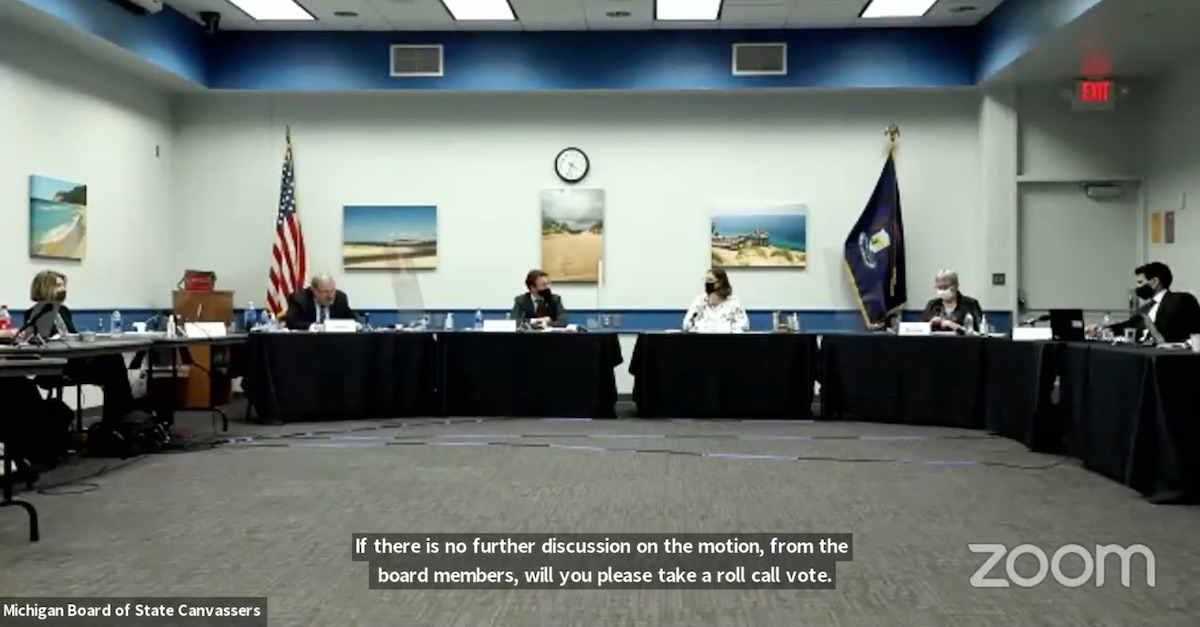 Despite hackles from a sole Republican holdout, Michigan’s Board of Canvassers certified President-elect Joe Biden’s victory in the Wolverine State on Monday, after the Trump campaign’s efforts to overturn the results in the courts and by bullying and cajoling bureaucrats fell apart. That GOP critic ultimately abstained, without voting against the motion.

Republican Aaron Van Langevelde, voting with two Democrats in favor of certification, made clear that making the will of the people official was his legal obligation.

“We have a duty to certify these returns,” Van Langevelde conceded in a remark that in any other election cycle would have been a banal recitation of the law.

In the context of the 2020 election results, the comment was a bombshell.

That left his fellow Republican Norman Shinkle flailing for cover to shirk his duty to recognize the results of a free and fair election.

Michigan law criminalizes the willful neglect of duty by a public officer as a misdemeanor punishable by up to a year imprisonment, but Shinkle claimed to find legal authorization to adjourn today’s certification via the 40-day window.

Michigan’s former elections director Christopher Thomas told Shinkle he did not have the power to delay a vote when the counties sent him the certified data and that a “no” vote is not an option for a ministerial job.

“Without a yes, you don’t have anything—no winners, no losers,” Thomas noted.

Perhaps recognizing the truth to that statement, Shinkle never gave that “no.”

“It’s not complicated,” he said. “It’s very simple. We’re required to canvass the returns and determine the result.”

Michigan’s state and federal courts rejected the cascade of lawsuits and conspiracy theories that poured into the judiciary from the Trump campaign and its allies. One Michigan judge laughed “inadmissible hearsay within hearsay” evidence out of court with the exclamation: “Come on, now!” Another judge panned the so-called Dominion conspiracy theory blaming voting systems for Trump’s loss. The Trump campaign itself withdrew the federal case that it filed in Michigan.

When former Michigan state senator Patrick Colbeck cited the Dominion conspiracy, he conceded that he did not bring his concerns to Attorney General Dana Nessel (D), who—unlike the board—has authority to investigate such claims.

Applauding the results, Nessel noted: “A record number of citizens turned out to vote in an election that was fair, secure and transparent.”

“It is now the responsibility of every official and leader in this country to ensure that the will of the voters is heard,” she wrote in a statement. “The Board’s actions today did exactly that in Michigan and I appreciate and respect their courage under these historic circumstances.”

In an even more dramatic display of bureaucrats transcending partisanship on Friday, Arizona’s Maricopa County Board of Supervisors unanimously approved their certification—despite pressure reported by the chair to take what he described as an illegal action to reject the vote.

If Pennsylvania follows through on their anticipated vote to certify today, President-elect Biden will win the electors needed—just as he did more than two weeks ago.