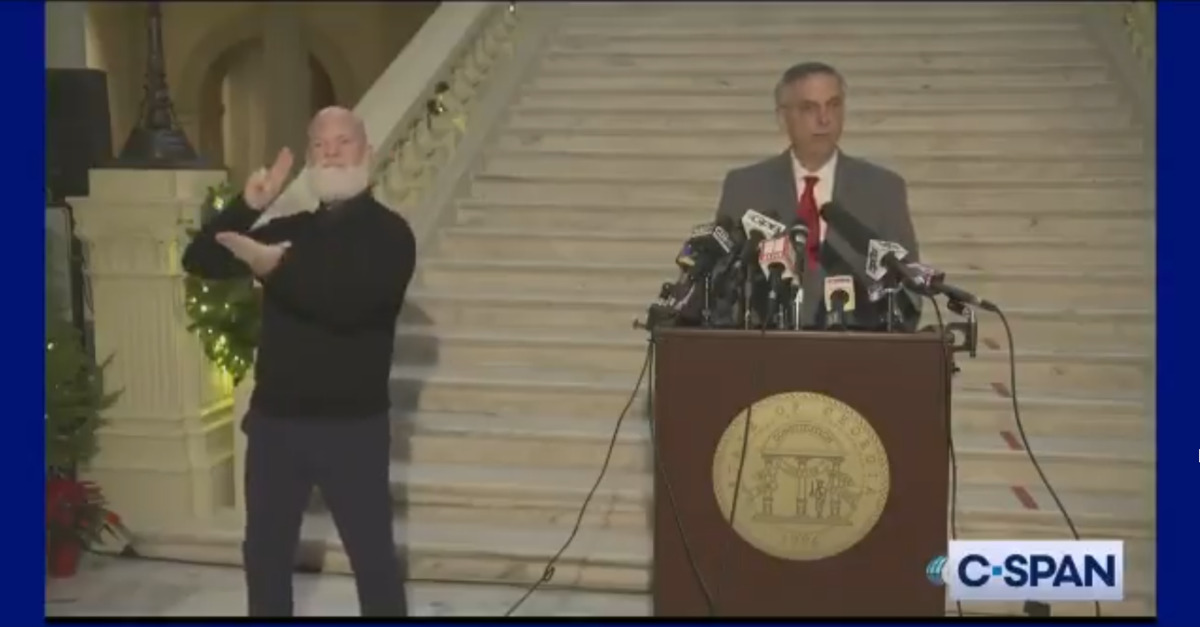 The State of Georgia will recertify the results of the 2020 presidential election, definitively delivering Joe Biden 16 Electoral College votes after three separate ballot counts in the state.

President Donald Trump, for his part, appeared to hope against hope by projecting an image of still having a chance in the Peach State.

“The Republican Governor of Georgia refuses to do signature verification, which would give us an easy win,” Trump alleged via Twitter–casting aspersions about Governor Brian Kemp. “What’s wrong with this guy? What is he hiding?”

But a chance to win is what Trump decidedly does not have.

Over the weekend, Trump made a last-ditch appeal to–and criticism of–Kemp by imploring him to “immediately ask for a Special Session of the Legislature” in order to overturn the election results.

“Any attempt by the legislature to retroactively change [the] process for the November 3rd election would be unconstitutional and immediately enjoined by the courts, resulting in a long legal dispute and no short-term resolution,” they said, calling the president’s request “to select a separate slate of presidential electors” a political dead letter and “not an option that is allowed under state or federal law.”

But the two Georgia Republicans did offer Trump an ample amount of grist for his an his allies’ conspiratorial mill of persistently false claims of voting fraud and victory in the state that he lost for the Republican Party for the first time since 1992.

“The judicial system remains the only viable — and quickest — option in disputing the results of the November 3rd election in Georgia,” Kemp and Duncan added.

Raffensperger, however, was a bit more straightforward about the actual state of affairs in Georgia on Monday morning.

“We have now counted legally cast ballots three times and the results remain unchanged,” he said during a press conference. “As secretary of state, I have worked to secure the vote for all Georgians.”

He went on to catalogue a litany of vote protection measures intended to ensure the integrity of the state’s electoral system–an obvious defense against the cascade of unsupported attacks against his work so far.

“Whether it is the president of the United States or a failed gubernatorial candidate, disinformation regarding election administration should be condemned and rejected,” Raffensperger continued–calling out both Trump and losing 2018 Democratic Party candidate Stacey Abrams. “Integrity matters. Truth matters.”

“Today the secretary of state’s office will be re-certifying our state’s election results,” he went on to explain. “Then the safe harbor under the United States Code to name electors is tomorrow and they will meet on December 14th to elect the next president.”

But despite the certainty of every relevant official in the Peach State, the 45th president’s stalwart supporters still believe–or at least profess to believe–there is some sort of path to victory.

Hudson Institute Senior Fellow Michael Pregent, who the think tank describes as a “Middle East analyst” and who describes himself as a “former intelligence officer,” latched on to the disproved Dominion Voting Systems scandal on Monday–insisting that thousands of invalid ballots were the impetus for Biden’s win in Georgia.

“The math isn’t there for Trump,” he noted. “The lawsuits have been garbage fires and have been thrown out over and over. It’s done.”

Pregent and Moss then engaged in the following back-and-forth that serves as something of a microcosmic exposition of how Trump’s claims have fared when met with reality:

Take it up with the Republican Secretary of State. He says your wrong. No lawyer has credibly presented your arguments in court either. It makes for good Twitter commentary but it’s not evidence. It’s conjecture and speculation. https://t.co/xVCSCVVR87

And you keep failing on both in courts of law. Every. Single. Time. https://t.co/9fTCAjMeO9