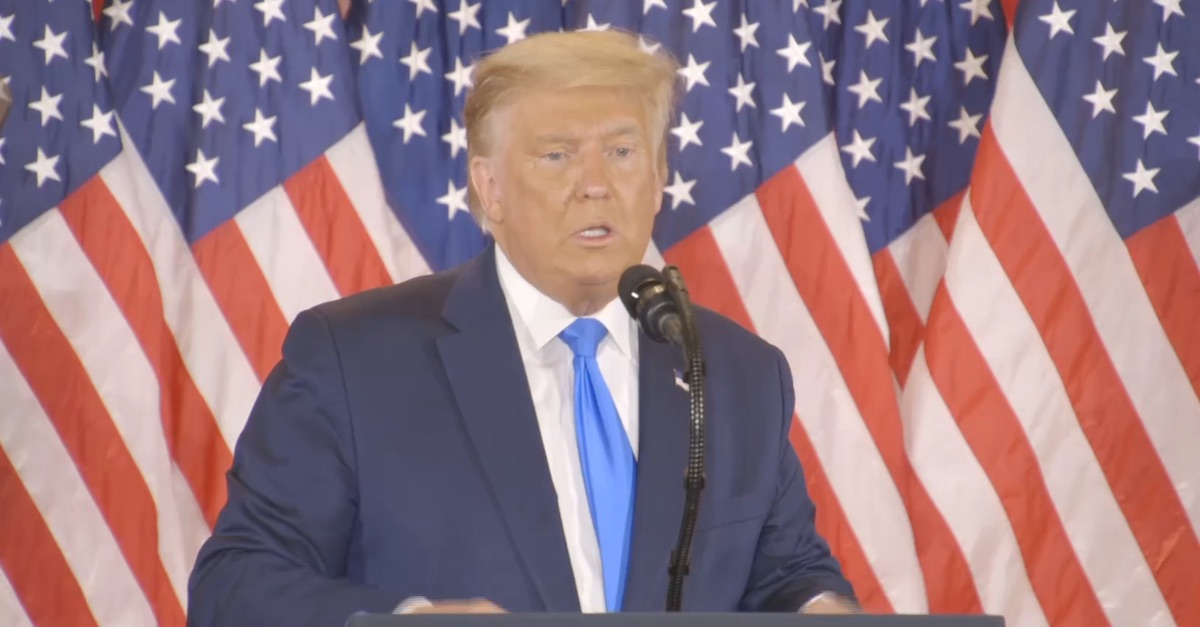 No clear winner of the 2020 presidential election had been expected or declared on Election Day, as polling sites across the country scrambled to count millions of ballots that rolled in across the country amid unprecedented levels of mail-in voting as the result of the pandemic. That did not stop President Donald Trump from falsely claiming that he won, accusing his opponent Joe Biden of trying to “steal” the election from him in a post quickly flagged by Twitter from spreading election disinformation.

Following through on every threat that election-integrity experts feared, the president scrambled to preemptively delegitimize the results of the race as so-called “red mirages” gave way to blue gains in highly contested states, and Trump promised to go to the Supreme Court to stop the counting.

“We are up BIG, but they are trying to STEAL the Election,” Trump tweeted at 11:49 p.m. Eastern Time, in a post Twitter hid behind a warning sign for being “misleading.” “We will never let them do it. Votes cannot be cast after the Polls are closed!”

Hours later, Trump gave a speech that University of Texas School of Law Professor Steven Vladeck panned as “authoritarian,” a sentiment echoed by New York Congresswoman Alexandria Ocasio-Cortez, who secured re-election along with every other member of the so-called “squad” of formerly freshman Democrats.

Welp, we have a winner in the “most stunningly authoritarian and irresponsible speech ever given by a U.S. President” category…

Count the votes. Respect the results.

Trump used the words “frankly, we did win the election” and then vowed to go to the Supreme Court.

"We'll be going to the U.S. Supreme Court. We want all voting to stop. We don’t want them to find any ballots at 4 AM in the morning and add them to the list," Trump says in White House speech #Election2020 https://t.co/O34sVaoiTz pic.twitter.com/SsX71wWI98

Biden’s campaign responded by saying that the candidates do not call the contest.

“The president’s statement tonight about trying to shut down the counting of duly cast ballots was outrageous, unprecedented, and incorrect,” Biden’s campaign manager Jen O’Malley Dillon said in a statement. “It was outrageous because it is a naked effort to take away the democratic rights of American citizens.”

Unlike Trump, Biden did not declare a win. He said he believed the campaign was on the path to victory.

Legal battles over the results are expected to resume early Wednesday morning.

With results still too early to call, experts warn that early appearances could be deceiving.

The battleground states—among them, Florida, North Carolina, Pennsylvania, Michigan, Wisconsin—braced themselves for a phenomenon that experts described as blue and red mirages. That is the term for when Democrats or Republicans take an early lead based on the in-person voting returns, only for those margins to narrow or flip once precincts start counting the unprecedented numbers of ballots that have arrived this year by mail.

While Trump supporters broadly favor showing up at the polls on Election Day, Democrats have been more likely to opt for early, absentee, or mail-in voting alternatives to stay safe during the pandemic; state laws varied as to when those ballots could be counted.

Experts predicted the blue mirage would drape over Florida and North Carolina, where state laws allow for the counting of ballots in advance and the majority of people expected to vote in-person were Trump supporters.

That forecast held up, at least in Florida: Trump notched an early win in the Sunshine State, but the Tarheel State has not yet been called by press time.

The Rust Belt’s anticipated red-mirage warnings also turned out to be prescient.

Poll workers could not start counting mail-in ballots until Election Day in Pennsylvania, Michigan and Wisconsin. Counting continued on Wednesday morning, where counting in big cities like Detroit narrowed a previously commanding lead Trump once head in Michigan.

By press time, Trump held a deceptively comfortable 55-44 lead in Pennsylvania, but the race has not been called with 25-percent of ballots uncounted in metropolitan areas that lean Democratic.

A Strategy to Keep Trump in Office

Eugene Mazo, an election law expert who teaches at Rutgers University and the University of Louisville, pointed to another partisan phenomenon at play in the rural-urban divide.

“A lot of Democratic votes happened to be in very big blue urban areas: Detroit, Chicago, Houston and so forth,” Mazo told Law&Crime in a phone interview. “A lot of Republican votes happened to be in rural areas that are spread out. It’s a generalization. The urban cities are worse at election administration, that is, because they have so many votes coming in such a small geographic area it often takes them a longer time to count. And so what we see is when counting happens after Election Day, what we often see is Democrats gaining votes on Republicans.”

This trend played out four years ago as former Secretary of State Hillary Clinton narrowed her deficit to Trump in Michigan, where she started off trailing by 60,000 votes but fatefully lost the state by the razor thin margin of 10,000.

Noting that Republicans are well aware of this trend, Mazo sees a politically motivated effort to capitalize on the phenomenon through a pandemic-era litigation strategy.

“This is the strategy that they’re using to keep Trump in office, and I don’t know if it’ll work,” said Mazo, the author of Democracy by the People who had an unsuccessful run for Congress on a Democratic ticket.

Coming into Election Day with a commanding lead in the polls, Biden hoped to avert protracted court battles with a decisive victory.

“If Biden’s margin is very small, you can bet that there’s gonna be litigation, and it’s going to go to the Supreme Court,” Mazo noted, with Democrats pushing to count every ballot and Republicans seeking to invalidate as many mail-in ballots as possible.

‘Potentially Flip the Results of an Election’

Federal and state courts in swing states across the country began hosting these legal battles long before Election Day, as a Supreme Court battle heats up that some scholars warn advances a radical idea for discarding ballots rejected even by the conservative majority in Bush v. Gore—the decision that ended the Florida recount in 2000.

Justice Brett Kavanaugh floated the idea of invalidating thousands of absentee ballots that were postmarked on time but arrived after Election Day in a curious passage of his concurring opinion in Democratic National Committee v. Wisconsin State Legislature on Oct. 26.

“Those states want to avoid the chaos and suspicions of impropriety that can ensue if thousands of absentee ballots flow in after election day and potentially flip the results of an election,” Kavanaugh wrote in his widely criticized concurring opinion.

For Mazo, the election law scholar, the argument made no sense.

After raising eyebrows with that opinion, Kavanaugh balked at three other cases challenging extensions of receipt deadlines for mail-in ballots in Pennsylvania and North Carolina, where Republican challengers lost by a 5-3 margin. Newly minted Supreme Court Justice Amy Coney Barrett played no part in those decisions, while Chief Justice John Roberts and Kavanaugh appeared to join the court’s liberal wing.

In a Boston Globe op-ed, Harvard Professor emeritus Laurence Tribe and Bard scholar Steven Mazie noted that split could change with Barrett completing the nine and Kavanaugh returning to the conservative fold that he held in the Wisconsin ruling. The scholars fear that the court’s empowered right flank might develop the idea that Kavanaugh toyed with in that ruling, which envisions the possibility of discarding those legally cast ballots after the fact.

“It was unwarranted and irresponsible to call potential Supreme Court decisions a ‘coup,'” Garber told Law&Crime. “There are both federal and state legal principles at stake in a presidential election, and the Supreme Court could be an entirely proper venue to resolve some of these disputes.”

Garber also said that Trump’s “declaration of victory and litigation threat is not surprising.”

“He perceives that his legal strategy will benefit from projection of strength. And if he loses, he will likely want to save face by claiming the election was stolen,” he said. “The public needs to separate the rhetoric from the reality, which is that key votes still need to be counted, and that virtually all of these votes are valid even by Trump’s measure because they were received on or before Election Day.”